I never thought I could learn IT lessons on the football field, until I did.

The story has probably been told a million times by now.

You become a new parent, and you help your child grow. They get to the age in which an interest is spawned, and you of course help them hone their skills to deepen their love for that very interest. You enjoy watching them do something they love. It makes them better. It makes you proud.

My version of that story was mostly the same as everyone else with my first-born son, Eric. He was a joy to raise, and he decided to play American football. It certainly helped that our local team had recently won the Superbowl title earlier that very year.

You may also like:  Lessons Learned in Software Development

While I had a strong understanding of the game of football, I had never played on an organized team. So, I helped Eric hone his skills after watching and researching to the best of my abilities. I enjoyed watching him play too ... until the coaching staff realized I had a passion for videography.

At that point, there was a fork in the normal path as I became the de facto filmer for the teams in which Eric played. This continued throughout his football career, and I was able to capture some amazing moments of his record-setting team -- they ultimately became the best team in his high school's very solid and successful football history.

When Eric was in middle school, I was asked to join the high school football program, spending Friday nights under the lights, high above the stands, capturing every play for the coaches to review the next day.

One would think filming football games for high school is a pretty simple task. Perhaps it was when I was in high school, where someone sat with a standard video camera in the press box starting and stopping the camera just before each play started and just after the play ended.

These camera angles are all uploaded to a dedicated service, like Hudl.com. From there, the multiple angles can be linked together, allowing the ability to toggle between each angle for every play of the game.

Additionally, another volunteer or coach uses an application to provide the meta data during the game, which is also synchronized with the multiple camera angles. At a glance, the data for the play, result of the play, and current score can be visible to those watching the film.

Coaches then use services like Hudl.com to add in information about each play, which helps generate statistics on how a given offensive play performs against a given defensive play.

The system is amazing. It even allows video to be shared with other coaches and the referees, too.

What I Learned As A Volunteer

Those Friday evenings bled very much into the weekend. On one occasion, our team traveled to another state to play a Friday night game. After arriving home at 2 am, I spent the next three hours getting everything noted above in place, so that the film was ready by 6 am, when the coaches prepared for their film sessions.

The first thing I learned is that high school football at a quality program requires a great deal of dedication and time to provide results that are beneficial to the team.

I also learned that I had to alter my approach to how I watched the game. When my son was playing offense or defense, I could simply watch him and not have to worry about anything else. When I started filming his teams, though, it became a little bit more difficult. Now, I had a responsibility to cover a certain angle.

As I put the film angles together, I would always look forward to a few key plays from the game. These could be great plays that led to an awesome result for our team. Or vice versa.

That one game that required three hours to prepare was largely due to me performing some personal analysis on what did not work so well for that particular game. Having all the views available allowed my analytical mind to study and figure what needed to change to avoid a similar fate in future games.

When my second son Finn was born just before the football season started, I decided that my time as a volunteer would need to come to a close. The amount of time required could no longer be justified during this next chapter of my life.

How Can This Have A Benefit To IT?

Reflecting back on this time of my life, I realized there are some lessons we can learn from this experience:

When something unexpected happens, taking the time to examine the situation from multiple angles can be extremely helpful. When I first started volunteering, I could not understand why so many angles were needed. Now I fully understand, since each angle provides value that isn't available in another.

I would expect that when an unfavorable play happens at a high school football game, a majority of those in attendance will have their thoughts on why the situation happened. From a distant view, their eyes might have made them see the play in a way that formulated a conclusion. That conclusion led to a belief that a certain individual or decision is the cause of the negative result.

Reviewing not only all the angles, but also having an understanding of what was being instructed at the time can provide a better landscape to analyze the problem. Perhaps the player who was thought to cause the mistake was doing exactly as instructed. Or perhaps that same individual encountered something unexpected, which threw the entire timing off. These are just a couple examples that those in the stands may not ever realize.

In IT, this is taking the extra time to gather all of the information before making a decision or performing some type of action. Without such an approach, time could be wasted trying to fix an aspect of the application landscape that is not broken or the root cause of the issue.

3. Learning From A Different Perspective

At first, there might have been a communication gap, but that was quickly eliminated as I began to understand their goals and directions. It became clear to me that I needed to have a full understanding of their expectations for me and the services I would be providing. I listened far more than I spoke, asking mostly questions when I did raise my voice.

This experience really helped me think about my relationships with my customers and product owners. For any development effort to become successful, it is important to understand the goals and directions the customer is wanting to implement. At the same time, having an understanding of expectations of the development team is helpful as well, especially when your original views may not be anything close to the customers expectations.

4. Volunteer Doing Something You Enjoy

Lastly, I can't imagine how I would have bridged the gap from the things I learned from my volunteer efforts with the high school football program. I made connections, bonds, and friendships that I still maintain today, years after I filmed my last football play.

I can't stress enough the bi-directional benefits that result from being a volunteer. It doesn't matter if it is something related to sports or something like helping out at a local homeless shelter. You will take away something from that experience that will help you grow as a person.

By the time Eric reached his junior year of high school, I had reached the point where I could hand over my camera angle to a student filmer that had become part of the program. As a result, for the majority of his junior year, I was able to watch him play on Friday nights.

I was also able to watch Eric play on Friday nights during his senior year, when his team never lost a game, winning the state championship and breaking nearly twenty records in the process. It was the first time in 10 years that I was able to sit in the stands and watch him and his amazing team do what they did best. 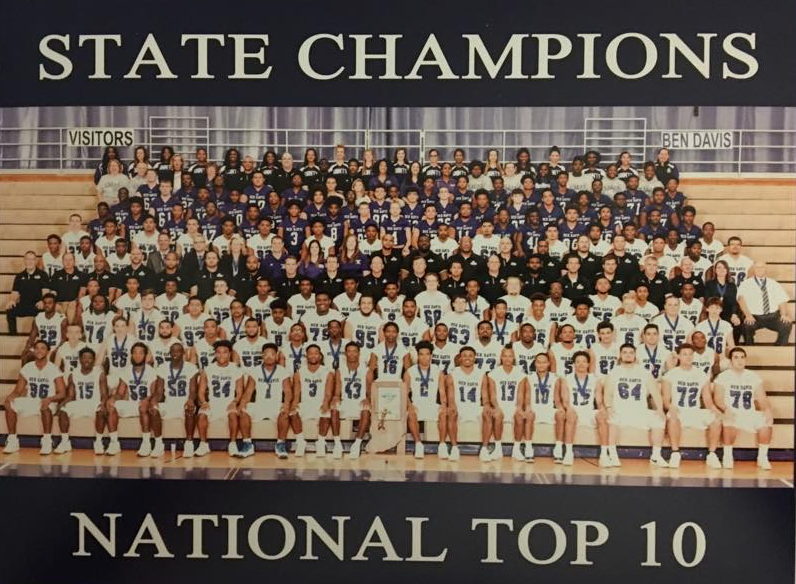 When I think about my time as a volunteer, my memories are full of wonderful experiences. In those early days, Eric was with me for each game. Then he started assisting the coaches with gathering statics. We grew closer during those times. I learned a great deal from that chapter in my life, and I truly hope I provided some value to the players, coaches, and other volunteers I worked alongside for several years.

Those memories are attributes that I have been able to carry into my life as an IT professional. My hope is that you are able to gain something valuable in reading this article, too.

What I Learned About IT From Rocking My Son

Parenting and IT: More Lessons Learned