In June, I sat in on an AWS event in Tel Aviv. I didn’t hear a single word about infrastructure or IT and nothing about VMs or storage, either. It was all about developers and how they can build production grade solutions faster, at a fraction of the cost, while incorporating Amazon’s latest security, AI, and analytics capabilities.

Why mess with VMs, deploy a bunch of software packages, write tons of glue logic and abstraction layers, figure out end-to-end security, debug, and tune all that? The new model presented was based on taking an API gateway, plugging into a user directory-as-a-service, then databases-as-a-service (DBaaS), some “serverless” functions with business logic and voila! You’re done.

Want to take it to the next level? Configure multi-factor authentication in a few clicks, add some AI services and analytics dashboards and even hook IoT devices using the AWS SDK. Yes, they forgot to mention all those are proprietary APIs and services that lock you in, and that they’re often quite expensive over time, but that’s the price of agility. 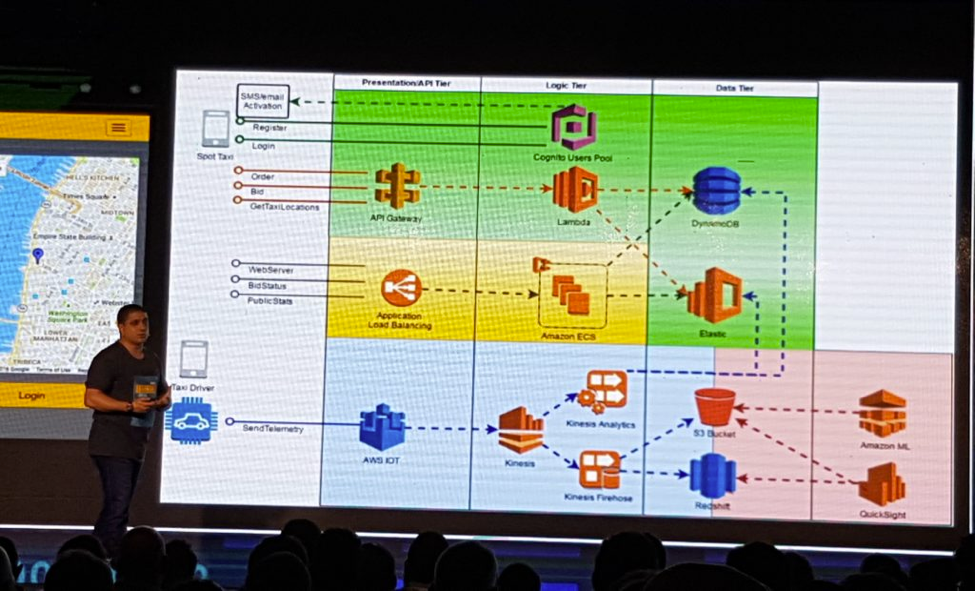 Now contrast that with the IT landscape, which is still too in love with hardware and system innovations that make no impact on the bottom line. Breaking news in IT land is the hyper-converged infrastructure (HCI) and SSD storage sold to infrastructure teams, while those teams struggle to stay relevant in the face of cloud innovation.

The business units, development, and DevOps in large enterprises have two options: either build fast with the cloud, or wait for IT to build an equivalent solution delivered through self-service portals. NO, I don’t want more VMs or vDisks and don’t sell me HCI. What I do want is an Amazon-like service, where developers can use the platform directly and leverage pre-integrated Lego building blocks and where I can jump from development to production or scale in a few clicks.

Why Don’t IT Vendors Take Action?

It is quite clear that the cloud has its limitations. For example, when it comes to latency or performance-sensitive workloads, or when your company is big enough and it’s too expensive, or when you want to avoid getting locked-in. Many IoT workloads are not that cloud friendly and will, therefore, get handled close to the edge.

You would expect incumbent IT vendors to start closing these gaps, buying companies with the cash they still have and integrating components into a working solution. IT companies with strong software IP like IBM, Oracle, and Microsoft are taking significant steps towards becoming “hybrid cloud” companies. AWS is planting the seeds for edge and on-prem deployments with Snowball, Snowmobile, and Greengrass. What about everybody else?

HPE is selling its software assets and at the same time spending billions on buying infrastructure companies (SGI, Nimble, SimpliVity). HPE’s biggest news is the reincarnation of “The Machine” using SGI HPC technology and fresh marketing paint. Yes, they also go after the “edge,” but with more hardware and no real software story to go along with it.

HPE bets on Azure’s stack for on-prem cloud. Well, if a company is big enough to maintain its own cloud, I guess it will prefer low-cost servers from whitebox vendors or guys like Dell who can work at lower margins. BTW in case you haven’t noticed, Microsoft’s Open19 initiative is about taking you out of the loop and promoting whiteboxes.

Cisco seems to be betting on smart networking and it’s made some software investments like in Jasper and AppDynamics. It will help you play with open source, but it doesn’t have anything close to a fully integrated solution, not even its own storage.

Dell has a few more golden eggs up its sleeve, like VMware, Pivotal, Virtustream, and EMC {code}. It’s also got some nice “software-defined” parts such as Isilon and ScaleIO, but those mostly target IT infrastructure buyers (with the exception of Pivotal). It’s time to take all them, add higher level services, and build a real stack. No, not the 10th converged offering from Chad’sVCE group, or a “cloud-native” washed HCI with VMware + Pivotal.

Michael, If you are listening, why not merge VMware and Pivotal into a single stack? Make Kubernetes another option and build up from there using certified partners and M&As. (Yes, I know you want to take Pivotal public in order to fund the EMC buyout… Just saying, think like a Texan.)

I guess one of the biggest challenges for IT vendors is the fact they sell to IT and IT needs to explain to business units why it is still relevant — while its users and developers are shopping around for public cloud agility and sophistication. Another challenge is that sales teams are compensated on and know how to sell boxes, not services or solutions, let alone AI.

The way forward is for us – the smaller and most innovative companies which have a cloud services DNA – to collaborate and build the new stack. We will do it with modularity, integration, and usability in mind so that it’s like the public cloud. And we’ll allow interchangeable components and open APIs to drive a larger community, minimizing lock-in both for cloud and on-prem.

Should You Own or Rent Your Infrastructure?

Modernizing IT Infrastructure for Manufacturing Organizations with Hyperconvergence, Part 1

Are You on Track to Meet Your Data Center Resolutions? [Infographic]