Last week, I attended the WIRED Smarter conference in London and wrote an article about a presentation from the Energy track that explained how Google is using DeepMind to reduce energy consumption in its data centers.

My favorite presentation of the day came from Maria McKavanagh, the Chief operating officer at Verv, called “Creating a new energy marketplace that’s powered by data,” and brought together machine learning, IoT and blockchain.

Verv offers a peer-to-peer platform based on the blockchain, which allows trading between consumers and producers of low-carbon electricity. If you have a few solar panels on your roof and generate electricity surplus to your needs, you can supply the grid for some small compensation, or you could just supply your neighbor who has no panels and needs to buy power. The Verv platform has been set up to cut out the middlemen of the electricity supply and allow direct energy trading between suppliers and consumers.

Verv is known for their IoT home energy monitoring device, which uses AI to identify individual appliances used in the home by their characteristic signature electricity usage patterns. The Verv monitor gathers data and uses AI to build a profile for each home based on regular energy usage patterns.

For example, a device in my home would show that I run my washing machine, tumble dryer, vacuum cleaner, food mixer, and oven every Monday morning (that’s when I clean up after the weekend and make bread for the week ahead), while other weekday daytimes have a regular pulse of kettle boiling and laptop charging, except on Tuesdays, when I am out all day.

The IoT device tracks my electricity consumption and the Verv machine learning functionality builds a picture of regular energy usage. If I happen to have solar panels and decide to sell some of the excess of electricity that I generate, the AI would know that I typically have no electricity to spare on Mondays, but plenty on Tuesdays. Additional support comes from satellite data about cloud coverage and cloud opacity, allowing the AI to look ahead and determine whether I am likely to be generating excess solar electricity on any given Tuesday. If I’m likely to be in surplus, the trading platform could offer my solar-generated electricity to local consumers who need it — for example, my elderly neighbor who rarely leaves her house and watches TV around the clock. She is on a limited pension and wants electricity at an affordable price, but she would prefer to buy carbon-neutral energy if she can. 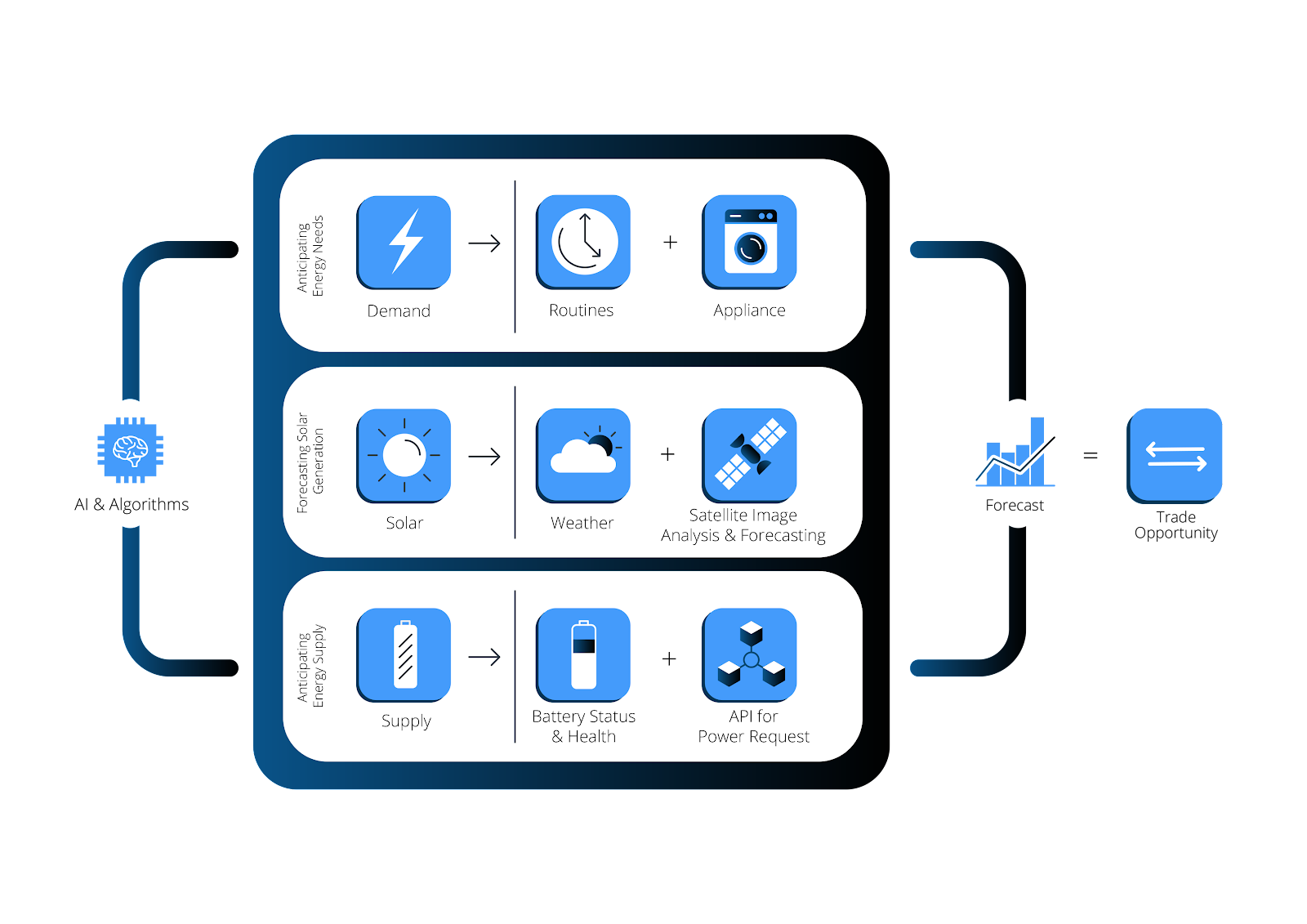 This approach is still undergoing testing. Verv has a community project that is trialing the trading platform in social housing. It will be the first time energy is physically traded in the UK through a blockchain-based peer-to-peer (P2P) energy trading solution, Verv 2.0, and it will be tested in 40 participating flats in the community to allow residents to share lower cost renewable energy.

While the approach is new, there are other similar suppliers of renewable electricity in Europe. A good example is Vandebron, based in the Netherlands, who offer sustainable energy (bio, wind and solar) from local producers directly to Dutch households. Vandebron is a subscription service in that it makes no percentage profit on energy consumption, and doesn’t benefit more if people use more energy. Instead, it charges a small subscription to connect suppliers (typically farmers and wind parks) and consumers, then any further power charges are paid directly to the electricity producer. The producers set their own prices, and customers can choose their producer.

In some states in the US, where energy markets are deregulated, customers can choose between different energy providers, but each offers a different tariff and promotional rate, which complicates selection. Machine learning can be used within a web platform to help consumers minimize their bills. When they sign up, the customers state their energy preferences (limiting themselves to sustainable sources, for example) and the machine-learning uses a smart meter to inspect their usage pattern and match it against the best supplier, automatically switching them to different suppliers and energy plans as better deals arise. The aim is to encourage uptake of renewable energy by offering it to consumers who are most willing to do the right thing and limit their use of non-sustainable sources, as long as they are not penalized by significantly higher prices.

It’s not mainstream technology, yet, but it’s easier than ever to be green!