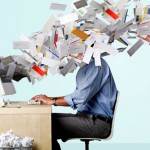 despite numerous proclamations that email would be dead, we still do an awful lot of it each working day.  it can often reach overwhelming proportions, with the average business person said to get nearly 100 emails per day.

a recent report by the future work centre suggests that the problem isn’t so much the volume of the emails we receive however, but rather the habits we’ve developed to deal with them.

the study saw around 2,000 working people surveyed about their email habits and behaviors.  they were especially looking to discover what factors influence our satisfaction levels with email.  was technology more influential than personality, for instance.

the analysis revealed some pretty poor habits and behaviors when it comes to how we manage our email.  for instance, many of us have notifications set for when we get a new email, whilst even more tended to leave their email application open all day.

what’s more, there was also a pernicious habit of checking emails at unsociable hours.  whilst those workaholics may think they’re getting a head start on things, all they appear to do is load up on stress.

“our research shows that email is a double-edged sword. whilst it can be a valuable communication tool, it’s clear that it’s a source of stress of frustration for many of us. the people who reported it being most useful to them also reported the highest levels of email pressure! but the habits we develop, the emotional reactions we have to messages and the unwritten organisational etiquette around email, combine into a toxic source of stress which could be negatively impacting our productivity and wellbeing,” the researchers say.

the report goes on to say that many of the efforts by organizations to limit the negative impact of email have had limited success, as people are inherently different, both in how they use email and how it stresses them out.

nonetheless, they have provided a few tips to help us to have a healthier relationship with email.