The Large Hadron Collider is operated with Linux. Laptops on the International Space Station run on Linux. So does Instagram and Nest thermostat. Recently we watched Ingenuity fly over Mars, an amazing robo-copter powered by…Linux! Yet another proof of how flexible and versatile this operating system can be.

About a year ago, out of desperation, I decided to migrate my Mom to Linux. The year has passed, so it’s time for retrospection and conclusions!

Like most of us, I’m officially Mom’s Computer Admin. Mom is a lovely lady in her late 60s. A real sweetheart. Mom’s computer skills are basic. Mom’s computer needs are basic too. Read the internets, send e-mail, type text, browse and edit photos, play videos and music, call family on Skype or Signal.

Until last year, she’d been using a Windows laptop—old but not too bad. Then one day, by deceit, threats, and obnoxious popups, Microsoft finally made her click that dreaded “UPGRADE TO WINDOWS 10” button.

My life as Mom’s Computer Admin quickly turned into hell with her desperate calls for help. Why does everything look so different? Where is my app menu? What, this pile of tiles is now my app menu? Why is the computer so slow? Why does it restart daily for updates, just when I need to use it? Why is something (she meant hard drive) making noise all the time? What is it actually doing all the time?

And how would I know that, without the ability to look into the source code?

I made her aware that she’s been volunteered as Windows 10 QA Tester by Microsoft, which laid off their entire Windows QA team, then turned half the world into guinea pigs. She didn’t feel like being a QA Tester unless it comes with proper pay and a dental plan.

I considered rolling back the upgrade. But with Windows 7 reaching end-of-life soon, I feared the worst. Without security updates, Mom’s computer would soon become a proud member of countless bot networks, mining cryptocurrencies, mailing spam, and launching vicious DDOS attacks on the vital infrastructure of entire countries. And I’d be the one to clean this mess. Every weekend.

Linux to The Rescue

With nothing to lose, I decided to migrate her to Linux. I’ve made “The Move” myself 5 years ago and have never been happier. It surely wouldn’t do harm to try it with her.

Mom was happy when I declared to fix her problems once and for all. What she didn’t know, is that she will become a crucial part of a year-long scientific experiment named: “Can Mom survive Linux?”.

And so, one day in February 2020 I arrived from faraway Dublin with a seven-year-old Lenovo Yoga 13, which had similar specs but a much nicer screen and half the weight. After some deliberations and testing various Linux distributions on VirtualBox, I’ve decided on the Zorin OS distribution, proudly made in Ireland. My choice was driven by the following factors: 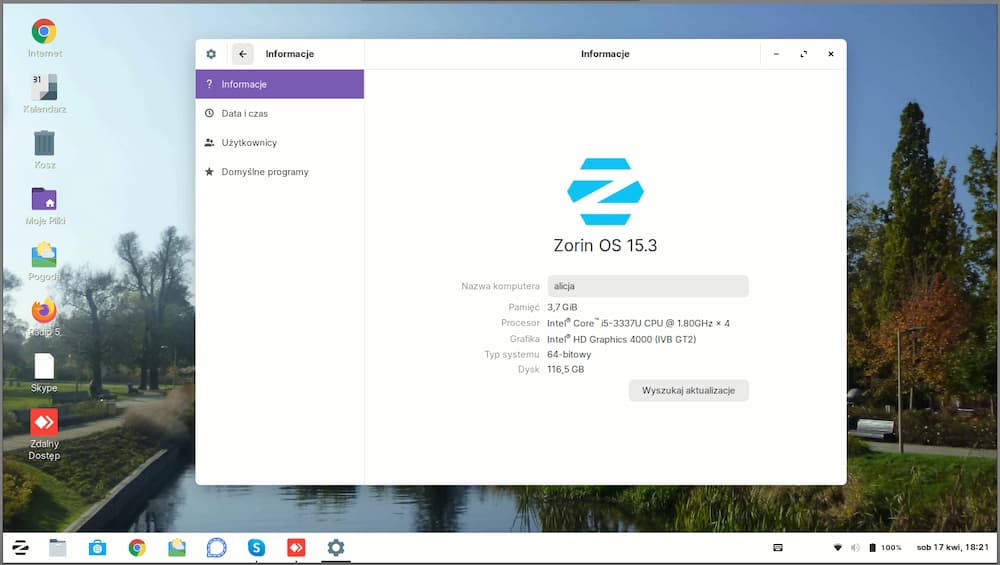 I’ve installed the OS my usual way, with the /home folder on a dedicated partition, to keep Mom’s stuff safe in an unlikely case of system reinstallation. It’s a trick that makes distro-hopping quite easy!

During installation, I’ve chosen Polish as the UI language. Just like me, Mom is Polish to the bone. No worries; Linux seems to support every possible language, including Klingon.

Then I’ve installed the following applications, to cover all Mom’s needs:

Notice how there’s no antivirus on the list. Yay!

Installation went smooth like it usually goes with Ubuntu-based distributions. Nothing like my first attempts with Redhat Linux 5 back in 1998, when I’ve been crying in despair at failed attempts to compile Star Office from sources ;-)

An hour later our Zorin OS box was ready and loaded with applications. 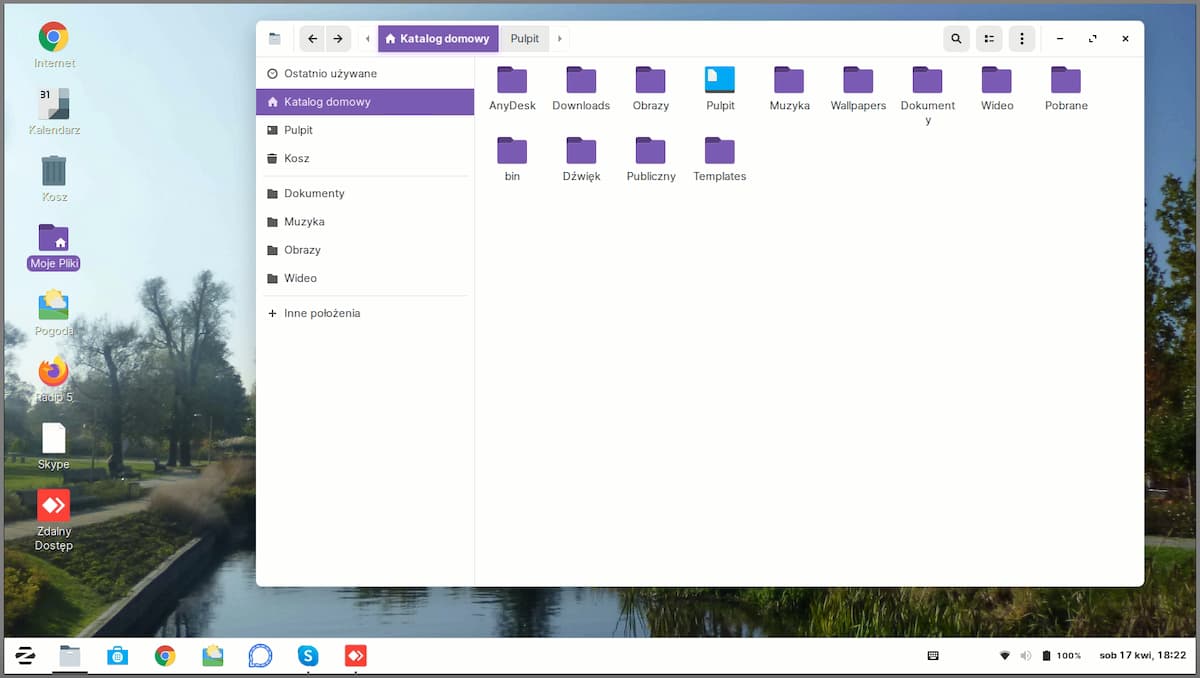 I made myself Mom’s Computer Admin, by doing the following:

With this, I have secure ssh access to Mom’s laptop. I’m able to perform periodic maintenance via shell without Mom even noticing anything. Because Linux normally DOES NOT require a reboot after completed updates; what a miracle, how’s that even possible? ;-) 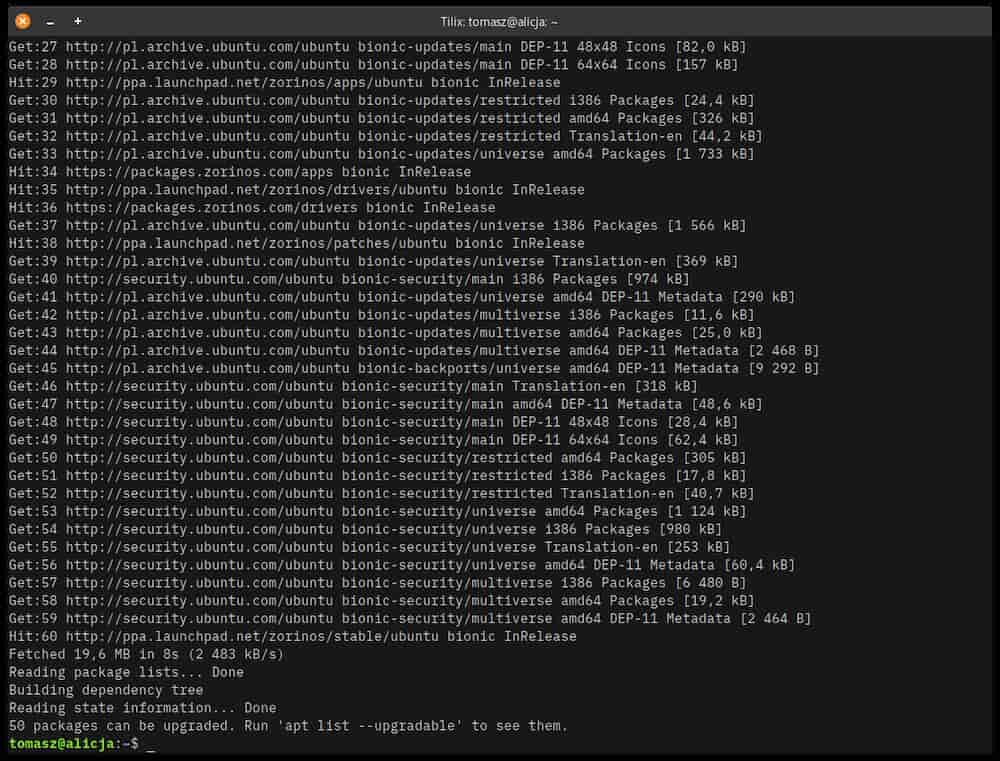 Without the slightest doubt!

When I showed Mom her new PC, she did ask why this new Windows looks different again. I had to reveal that this is not Windows at all but Linux and explain why we all love Linux. But then she picked up quickly. Classic Zorin OS desktop is very much like her old Windows 7. I watched her find her way through the system and launch her familiar applications with ease.

She immediately noticed how much faster the computer starts and how much better it performs.

Over the year she’s been regularly asking me when will I do the usual computer cleanup, so it doesn’t become slow again. I’ve explained that with her average use it wouldn’t be needed. Linux simply doesn’t rot on its own as Windows does. So far, this has been true. Her PC runs as smooth and fast as on day one.

Every now and then I ask how she feels with her new computer. She invariably answers that she’s happy with it ever since. Everything works smoothly. The computer doesn’t get busy for no reason. No more interrupting her with Very Important Updates. And the menu is where it should have always been. She’s comfortable with her usual applications in this entirely new environment.

Over the year I’ve been logging in remotely a few times to run routine package upgrades. I’ve logged in with AnyDesk twice. Once when Mom asked whether photos from an inserted SD card could be imported automatically into ~/Pictures folder. Preferably into folders named by dates. Yes, gThumb can be easily made to do that with a bit of bash :-). Another time I logged in to add frequently used websites as desktop icons.

And this has been all my effort as Mom’s Linux Admin so far! This way I could be Mom’s Computer Admin to 50 other Moms!

I hope that my story will inspire you to think about migrating to Linux. In the past, we’d often consider Linux as too difficult for the casual users. But today I believe that the opposite is true!

The less proficient computer users are, the more reasons they have to migrate to Linux!

With Linux, they will gain a smooth and polished desktop experience with a multitude of familiar applications. They will be much safer here than on any other popular computing platform. And for us, helping them with remote access has never been easier and more secure!

This article is not promoting any of the described products, services, or vendors. We don't have any commercial interest nor associations with them. We're not trying to suggest that these products or services are best for you, nor promising that your experience will be the same.

Published at DZone with permission of Tomasz Waraksa. See the original article here.