I've known almost since I started learning about Java that the Class-Path header field in a Manifest file specifies the relative runtime classpath for executable JARs (JARs with application starting point specified by another manifest header called Main-Class). A colleague recently ran into an issue that surprised me because it proved that a JAR file's Manifest's Class-Path entry also influences the compile-time classpath when the containing JAR is included on the classpath while running javac. This post demonstrates this new-to-me nuance.

It turns out that the Class-Path entry in a JAR's manifest affects the Java compiler (javac) just as it impacts the Java application launcher (java). To demonstrate this, I'm going to use a simple interface (PersonIF), a simple class (Person) that implements that interface, and a simple class Main that uses the class that implements the interface. The code listings are shown next for these.

As can be seen from the code listings above, class Main depends upon (uses) class Person and class Person depends upon (implements) PersonIF. I will intentionally place the PersonIF.class file in its own JAR called PersonIF.jar and will store that JAR in a (different) subdirectory. The Person.class file will exist in its own Person.jar JAR file and that JAR file includes a MANIFEST.MF file with a Class-Path header referencing PersonIF.jar in the relative subdirectory.

I will now attempt to compile the Main.class from Main.java with only the current directory on the classpath. I formerly would have expected compilation to fail when javac would be unable to find PersonIF.jar in a separate subdirectory. However, it doesn't fail! 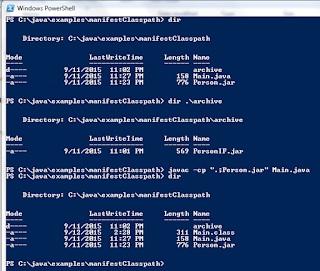 This seemed surprising to me. Why did this compile when I had not explicitly specified PersonIF.class (or a JAR containing it) as the value of classpath provided via the -cp flag? The answer can be seen by running javac with the -verbose flag.

The next screen snapshot demonstrates running the newly compiled Main.class class and having the dependency PersonIF.class picked up from archive/PersonIF.jar without it being specified in the value passed to the Java application launcher's java -cp flag. I expected the runtime behavior to be this way, though admittedly I had never tried it or even thought about doing it with a JAR whose MANIFEST.MF file did not have a Main-Class header (non-executable JAR). The Person.jar manifest file in this example did not specify a Main-Class header and only specified a Class-Path header, but was still able to use this classpath content at runtime when invoked with java.

The final demonstration for this post involves removing the Class-Path header and associated value from the JAR file and trying to compile with javac and the same command-line-specified classpath. In this case, the JAR containing Person.class is called Person2.jar and the following screen snapshot demonstrates that its MANIFEST.MF file does not have a Class-Path header.

The next screen snapshot demonstrates that compilation with javac fails now because, as expected, PersonIF.class is not explicitly specified on the classpath and is no longer made available by reference from the MANIFEST.MFClass-Path header of a JAR that is on the classpath. 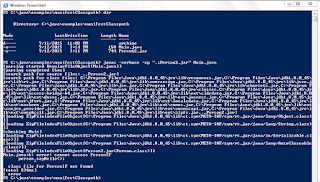 We see from the previous screen snapshot that the search paths for source files and for class files no longer include archive/PersonIF.jar. Without that JAR available, javac is unable to find PersonIF.class and reports the error message: "class file for PersonIF not found."

There are many places from which a Java classloader may load classes for building and running Java applications. As this post has demonstrated, the Class-Path header of a JAR's MANIFEST.MF file is another touch point for influencing which classes the classloader will load both at runtime and at compile time. The use of Class-Path does not affect only JARs that are "executable" (have a Main-Class header specified in their manifest file and run with java -jar ...), but can influence the loaded classes for compilation and for any Java application execution in which the JAR with the Class-Path header-containing manifest file lies on the classpath.