Hello all! While we all are talking about Java 9 and some people have yet to adopt Java 8 in their projects, here comes the new release of Java, the JDK 10. It's available to download now on Oracle's website. This is the first release in the new release schedule, where you have a new Java release every six months. I know it's quite early, but that's a reality now. Apart from the six-month releases, every three years, there will be an LTS release, which is sort of a major Java release. The next LTS release is Java 11, which should be out in September. So you can aim for that. Then you can update three years after that to the next LTS release.

Even though JDK 10 came along really quickly, there are some interesting features coming. I have yet to go into the details of them all, but prima-facie, they look useful and interesting to me.

Here is a quick word on those features.

Similar to JavaScript, Kotlin, and Scala, now Java will also have a var keyword that allows you to declare a local variable without specifying its type. The type will be inferred from context. For example, when you say var name = "Java", the compiler will already know the type is String.

I don't know how useful this will be, as I am quite used to seeing int i =0 or String name = "Java", and I liked the type information present in the variable declaration line, but it looks like Java is going the way Scala and Kotlin are and trying to incorporate changes from there.

Also note that the var keyword can only be used for local variables, i.e. variables inside methods or code blocks — you cannot use it for member variable declaration inside the class body.

As Sander Mak puts in his Pluarlsight course What's New in Java 10, this is one of the most eye-catching features of Java 10. It reduces the amount of boilerplate code needed to declare local variables in Java.

It's not so obvious from this simple example, but consider where a method returns a complex list type that requires a lot of angle brackets and generics to declare the type. This really saves time in those cases:

With the JDK 10 release, Java has adopted a new release cadence — every six months. There is a lot of debate over whether this is a practical approach. Many are saying that it's good to get new features every six months, though many complain that it's too little a time to adopt a JDK.

Anyway, this will be the way forward, with an LTS release every three years considered a major release. 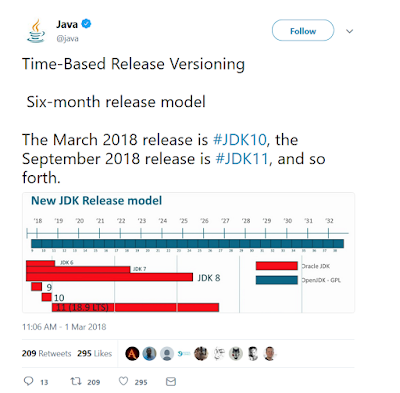 This is one of the more interesting and useful Java 10 features. It increases code isolation of different garbage collectors and introduces a clean interface for them.

This means it is easier to exclude a GC from a JDK build while also making it easier to add a new GC without it affecting the code base. You can further see Java Memory Management to learn more about G1 Garbage Collection and the difference between G1 and the Concurrent Mark Sweep Garbage Collector.

Here is another interesting feature that improves G1 worst-case latencies by making the full GC parallel.

If you remember from Java 9's release, G1 was made the default GC for the JVM, which was designed to avoid full GC. But when the concurrent collections couldn't reclaim memory quickly enough, it would end up falling back on a full GC, and that creates a problem.

This change will parallelize the full GC algorithm so that in the unlikely event of a G1 Full GC, the same number of threads can be used as in the concurrent collections to improve overall performance.

This sounds like a really cool feature. It enables the HotSpot VM to allocate the Java object heap on an alternative memory device, specified by the user.

6. Consolidate the JDK Forest Into a Single Repository (JEP 296)

This new Java 10 feature is all about housekeeping. It will combine the numerous repositories of the JDK forest into a single repository.

This is another important change Java 10 is bringing. If you remember, JDK 10 was created with the close collaboration with OpenJDK, and this is evident from this feature.

It also aims to reduce the difference between the OpenJDK and Oracle JDK builds. Critical security components such as TLS will now work by default in OpenJDK builds

This is another interesting feature that enables the Java-based JIT compiler, Graal, to be used as an experimental JIT compiler on the Linux/x64 platform.

If you remember, Graal was already added back in Java 9, but now you can enable it with the following JVM arguments:

If you don't know Graal, it is a new Java-based JIT compiler, which is the basis of an experimental Ahead-of-Time (AOT) compiler.

However, keep in mind that it is in an experimental stage, and you should not use it for production.

This Java 10 feature lays the groundwork for improved VM performance by making it possible to execute a callback on application threads without performing a global VM savepoint. This would mean that the JVM could stop individual threads and not just all of them.

There are several small improvements done as part of this feature or JEP 312 to improve VM performance, e.g. some memory barriers have been removed from the JVM and biased locking is improved by only stopping individual threads for revoking biases.

This is another Java 10 feature that focuses on housekeeping. It will remove the javah tool from the JDK, a separate tool to generate header files when compiling JNI code, as this can be done through javac. 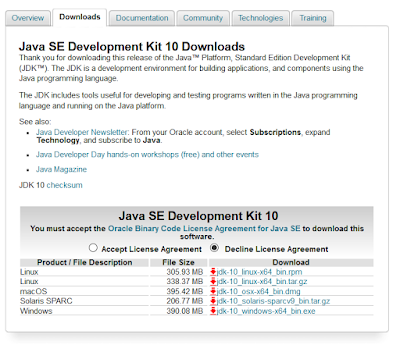 That's all about some of the interesting features of Java 10. There are a lot more low-level and API changes, which you can find on Oracle's official release notes. I'll also blog about those changes as and when I come to know them, so you can stay tuned for more JDK 10 articles and tutorials.