Join For Free
When I first wrote this blog my intention was to introduce you to a class ThreadLocalRandom which is new in Java 7 to generate random numbers. I have analyzed the performance of ThreadLocalRandom in a series of micro-benchmarks to find out how it performs in a single threaded environment. The results were relatively surprising: although the code is very similar, ThreadLocalRandom is twice as fast as Math.random()! The results drew my interest and I decided to investigate this a little further. I have documented my anlysis process. It is an examplary introduction into analysis steps, technologies and some of the JVM diagnostic tools required to understand differences in the performance of small code segments. Some experience with the described toolset and technologies will enable you to write faster Java code for your specific Hotspot target environment.

Math.random() works on a static singleton instance of Random whilst ThreadLocalRandom -> current() -> nextDouble() works on a thread local instance of ThreadLocalRandom which is a subclass of Random. ThreadLocal introduces the overhead of variable look up on each call to the current()-method. Considering what I've just said, then it's really a little surprising that it's twice as fast as Math.random() in a single thread, isn't it? I didn't expect such a significant difference. 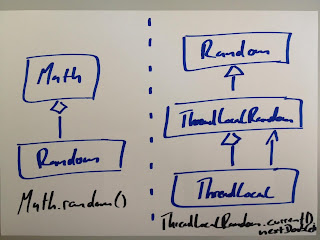 Again, I am using a tiny micro-benchmarking framework presented in one of Heinz blogs. The framework that Heinz developed takes care of several challenges in benchmarking Java programs on modern JVMs. These challenges include: warm-up, garbage collection, accuracy of Javas time API, verification of test accuracy and so forth.

Here are my runnable benchmark classes:

Notice: To make sure the JVM does not identify the code as "dead code" I return a field variable and print out the result of my benchmarking immediately. That's why my runnable classes implement an interface called RunnableBenchmark. I am running this benchmark three times. The first run is in default mode, with inlining and JIT optimization enabled:

The last test is with JIT optimization, but with -XX:MaxInlineSize=0 which (almost) disables inlining:

Let's interpret the results carefully: With full JVM JIT optimization the ThreadLocalRanom is twice as fast as Math.random(). Turning JIT optimization off shows that the two perform equally good (bad) then. Method inlining seems to make 30% of the performance difference. The other differences may be due to other otimization techniques.

The first snippet shows Random.next() which is used intensively in the benchmark of Math.random(). Compared to ThreadLocalRandom.next() the method requires significantly more instructions, although both methods do the same thing. In the Random class the seed variable stores a global shared state to all threads, it changes with every call to the next()-method. Therefore AtomicLong is required to safely access and change the seed value in calls to nextDouble(). ThreadLocalRandom on the other hand is - well - thread local :-) The next()-method does not have to be thread safe and can use an ordinary long variable as seed value.

About method inlining and ThreadLocalRandom

One very effective JIT optimization is method inlining. In hot paths executed frequently the hotspot compiler decides to inline the code of called methods (child method) into the callers method (parent method). "Inlining has important benefits. It dramatically reduces the dynamic frequency of method invocations, which saves the time needed to perform those method invocations. But even more importantly, inlining produces much larger blocks of code for the optimizer to work on. This creates a situation that significantly increases the effectiveness of traditional compiler optimizations, overcoming a major obstacle to increased Java programming language performance."

Since Java 7 you can monitor method inlining by using diagnostic JVM options. Running the code with '-XX:+UnlockDiagnosticVMOptions -XX:+PrintInlining' will show the inlining efforts of the JIT compiler. Here are the relevant sections of the output for Math.random() benchmark:

The JIT compiler cannot inline the Random.next() method that is called in Random.nextDouble(). This is the inlining output of ThreaLocalRandom.next():

Understanding the overhead of the invokevirtual instruction

So why is (virtual) method invocation expensive and method inlining so effective? The pointer of invokevirtual instructions is not an offset of a concrete method in a class instance. The compiler does not know the internal layout of a class instance. Instead, it generates symbolic references to the methods of an instance, which are stored in the runtime constant pool. Those runtime constant pool items are resolved at run time to determine the actual method location. This dynamic (run-time) binding requires verification, preparation and resolution which can considerably effect performance. (see Invoking Methods and Linking in the JVM Spec for details)

That's all for now. The disclaimer: Of course, the list of topics you need to understand to solve performance riddles is endless. There is a lot more to understand then micro-benchmarking, JIT optimization, method inlining, java byte code, assemby language and so forth. Also, there are lot more root causes for performance differences then just virtual method calls or expensive thread synchronization instructions. However, I think the topics I have introduced are a good start into such deep diving stuff. Looking forward to critical and enjoyable comments!