January saw a lot of articles summarising 2018 and predicting things for 2019, so this month's Java Annotated Monthly casts an eye back to last year and looks forward to the new one. We also have a huge crop of Java tutorials this month for some reason, maybe everyone's new year's resolution was to start blogging!

A smattering of Java-specific news, the main piece being that Raw String Literals will, unfortunately, not be a preview feature in Java 12. But in good news, Java 12 is feature complete and ready to come to us in March. 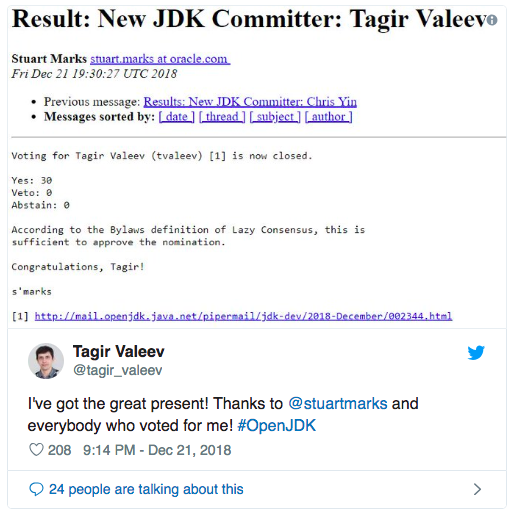 I've got the great present! Thanks to @stuartmarks and everybody who voted for me! #OpenJDKpic.twitter.com/TOhB2Bk30f

An absolutely huge number of tutorials covering Java topics: standard Java (from 8 to 11, and even some features from the future), Spring and Spring Boot, MicroProfile, Micronaut, and Microservices, classic design patterns, and more.

There was also a big focus on testing this month (suggested new year's resolution: write better-automated tests), and on Docker/Kubernetes, these last two seem to have crossed the "this is cool and up and coming" chasm into "this is just what we all use now" territory.

There's a bit of a theme of burnout here this month, at the end of one year, and the start of the next. It's probably normal to step back and consider how much work we did, how effective we were, how we feel about it, and what we'd like to do differently.

Here's a chance to catch up on the IntelliJ IDEA and other JetBrains news that you might have missed: