The featured library for my twelfth post on processing command-line arguments in Java is Command-Line Arguments with Java Reflection (CLAJR). This "library" is a single Java source file (CLAJR-0.9.java) available for download on SourceForge. The main page for CLAJR currently shows a 2006 copyright date and the downloadable source zip file CLAJR-0.9-src.zip is dated 6 December 2008. Although CLAJR appears to be largely unsupported in recent years and although it's unlikely that I'd choose CLAJR over some of the alternative libraries already discussed in this series for processing command line arguments from Java code, I believe CLAJR warrants a post focused on it. There are some fairly unique characteristics of CLAJR that make it interesting, even if one chooses not to use it.

Here are the steps I used to build a JAR with CLAJR (I had to make a slight change to the source file and that change is described later in this post):

The above steps are illustrated in the following two screen snapshots. 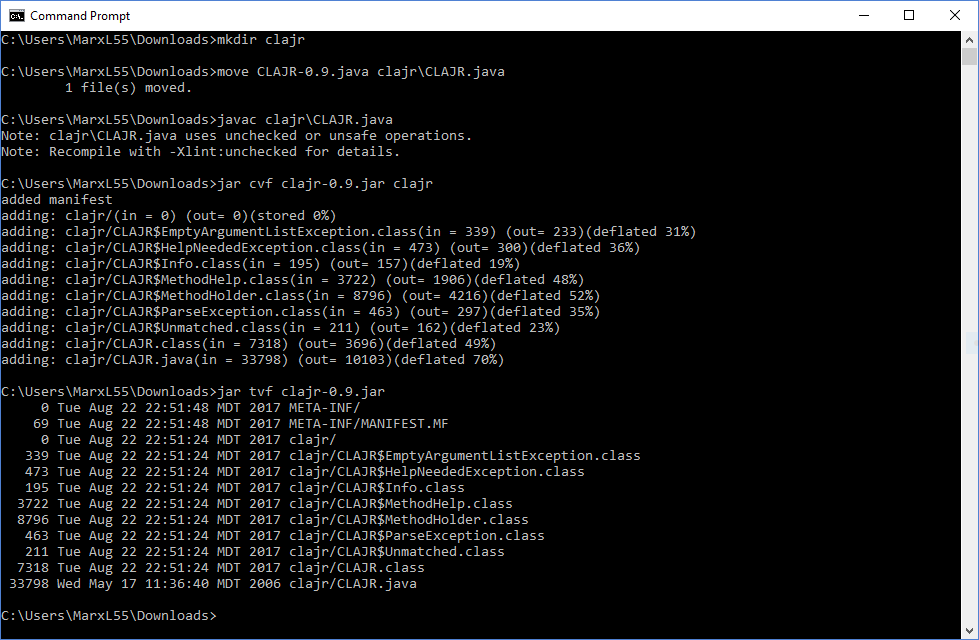 The Java-based command-line parsing libraries covered so far in this series tend to use annotations or specific programmatic APIs to allow for the definition, parsing, and interrogation of command-line arguments in Java code. CLAJR, as its full name suggests, instead uses Java reflection for defining the expected arguments to be parsed.

As with the other posts in this series, my example for this post demonstrates use of the CLAJR library to model --file/-f command-line arguments and --verbose/-v command-line arguments. To "define" these in CLAJR, I need to name my methods _f__file and _v__verbose to correspond to -f/--file and -v/--verbose arguments. This is demonstrated in the partial snippet of a nested class Options in the next code listing.

Parsing with CLAJR is a matter of a single statement. The next two lines of code demonstrate calling the static CLAJR.parse(String[], Object...) and passing to it the command-line arguments and just-instantiated instance of the Options class partially shown above.

CLAJR supports providing of help/usage information on a per-method basis through reflection. In this case, methods are named with a convention similar to those for the command-line arguments themselves, but with help in front of the method name. This is demonstrated for the two combinations of arguments shown earlier in the next code listing.

The methods in the code listing just shown provide "help" strings for the -v/--verbose and -f/--file arguments. The static CLAJR method CLAJR.getHelp() method provides a String representing command-line usage that is based on these methods. CLAJR provides different exceptions that can be captured and these are often useful in conjunction with the "help" methods. These are demonstrated in the next code listing which shows the multiple catches that can be performed related to different error cases and other situations that warrant display of error information.

CLAJR 0.9's CLAJR.parse(String[], Object...) method throws a Throwable and so the code above catches that Throwable.

The three screen snapshots that follow demonstrate this simple example. The first image shows the usage printed when no argument is provided. The second image depicts a normal flow of defining, parsing, and interrogating command-line arguments. The third image demonstrates display of help information when an unexpected argument is provided on the command line.

To get my examples to work, I had to change the CLAJR.java source file. Specifically, I changed line 491 in the invoke(String, String, boolean, List) method from if (tails == null) to if (tails == null || tails.isEmpty()). This is one of the advantages of open source; one can adjust or fix the code as necessary.

CLAJR allows a method named with a single underscore to be reflectively accessed. This - method corresponds to the "tail" parameter or parameters. I didn't use this in this example, but it's interesting to note that this will not work in JDK 9 because a single underscore is not allowed as an identifier in JDK 9. In fact, JDK 8's javac warns about this now as shown in the next screen snapshot.

Here are some additional characteristics of CLAJR to consider when selecting a framework or library to help with command-line parsing in Java.

CLAJR is a Java-based command-line processing library that is primarily distinguished from other libraries covered in this series by its use of reflection. Reflection is used to define expected command line arguments as well as the help messages associated with those arguments. CLAJR offers some unique ideas and approaches related to command-line processing in Java, but it's a somewhat dated library.

Positional Parameters in Java: An Update