I feel that the Apache Commons CLI project is selling themselves short. I've found it to be a very comprehensive, well-designed library for effectively parsing the command-line. The only shortcoming I've observed is that the project was developed before Java 5 — and annotations — were available. As such, the library doesn't offer support for any features that annotations have to offer.

Introducing the latest addition to MarkUtils: MarkUtils-CLI is a library that provides an effective bridge between Apache Commons CLI and Java annotations — without replacing the mature Commons CLI library.

This post uses examples similar to those used in earlier posts in this series ("file" and "verbose" command line options) to illustrate how MarkUtils-CLI wraps Apache Commons CLI and allows for the definition of options via annotations and provides typed options. In this post, MarkUtils-CLI's CliRunner is used for its convenience. The full source code listing for these examples is available on GitHub.

The "definition" stage with MarkUtils-CLI is where @Parameter annotations are applied as shown in the next code listing.

This code listing shows how the "short" option name (single hyphen/single character") and "long" option name (double hyphens/word) can be specified as distinct elements of the @Parameter annotation. A "description" element can be used in the "help" created by MarkUtils-CLI and the "required" annotation element allows one to specify a required option. Specifying argCount as zero for "verbose" also indicates to the parser that no arguments are expected for the "verbose" option.

When using MarkUtils-CLI's CliRunner approach, the "interrogation" stage is accomplished in the call() method of the Callable that is passed to the CliRunner's "run" method. The implementation of the "call()" method is shown in the next code listing and the code that passes the owning Callable to the CliRunner's "run" method is available in the full source code listing on GitHub.

The two screen snapshots that follow demonstrate the examples shown so far. The first image shows the help information generated when the required "file" option is not provided. The second image depicts the behavior of the sample code for various combinations of short name and long name options for "file" and "verbose." 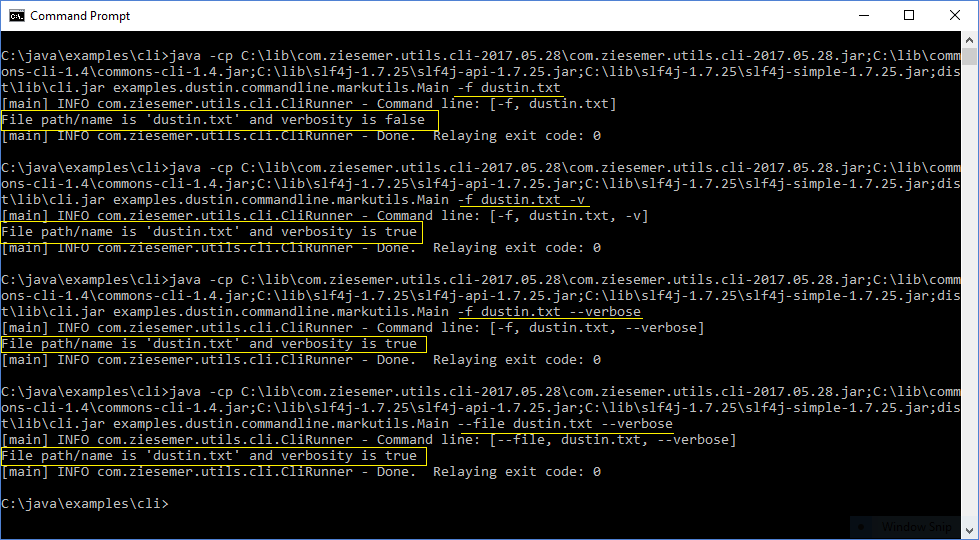 There are characteristics of MarkUtils-CLI to consider when selecting a framework or library to help with command-line parsing in Java.