Join For Free
Have you ever been wondering where to find some good end-to-end examples build with Java EE 6? I have. Most of the stuff you find on the net is very basic and doesn't solve the real world problems. This is true for the Java EE 6 tutorial. All the other stuff, like most of what Adam Bien publishes are a very tight scoped examples which also doesn't point you to a more complete solution.
So, I was very pleased to stumble over a more complex example done by Vineet Reynolds. It's called "Java EE 6 Galleria" and you can download the source code from bitbucket. Vineet is a software engineer contributing to the Arquillian project; more specifically, he contributed bugs fixes and worked on a few feature requests for Arquillian Core, and the GlassFish, WebLogic and Tomcat integrations for Arquillian. This is where I first came across his name. And following the Arquillian guys and him a little closer directly send me to this example. A big thanks to Vineet for a helping hand during my first tries to get this up and running. Follow him if you like on twitter @VineetReynolds.
Here is a brief explanation about it's background and this is also kicking of a series about running it in different settings and pointing you to a few more details under the hood. This is the basic introduction.

About the Galleria
The high level description of the project is the following: The Java EE 6-Galleria is a demo application demonstrating the use of JSF 2.0 and JPA 2.0 in a Java EE project using Domain Driven Design. It was written to serve as a showpiece for domain driven design in Java EE 6. The domain model of the application is not anemic, and is constituted of JPA entities. The entities are then used in session EJBs that act as the application layer. JSF facelets are used in the presentation tier, using Mojarra and PrimeFaces. The project seeks to achieve comprehensive coverage through the use of both unit and integration tests, written in JUnit 4. The unit and integration tests for EJBs and the domain model rely on the EJB 3.1 container API. The integration tests for the presentation layer relies on the Arquillian project and its Drone extension (for execution of Selenium tests).

Domain Layer
The application contains four domain entities for now - User, Group, Album and Photo which are the same as the JPA entities in the logical data model. 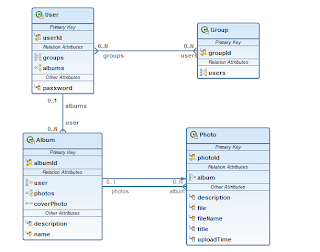 How it looks like
And this is, how this example looks like if you are running it on latest GlassFish 3.1.2. Curious to set this up yourself? Wait for the next post or give it a try yourself ;) 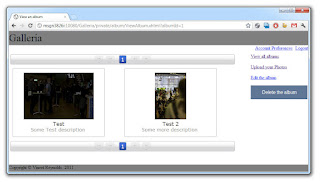