The Java Extension Mechanism is described in the Java Tutorial as a "standard, scalable way to make custom APIs available to all applications running on the Java platform." As described in Understanding Extension Class Loading, "the extension framework makes use of the class-loading delegation mechanism" with extension classes loaded after the bootstrap classes in rt.jar (and related JARs) but before the classes loaded from the typical classpath.

I'm going to use some simple examples in this post to demonstrate some of these differences. The next two code listings are for a very simple HelloWorld class and a main application class called Main that uses theHelloWorld class.

To demonstrate the use of the traditional classpath, I place the HelloWorld.jar file in a directory calledC:\hello and will access that JAR via wildcard (*) for Main to use. This is demonstrated in the next two screen snapshots. 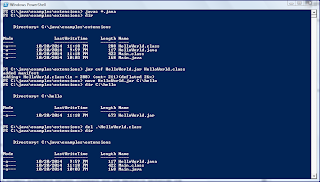 The two previous images demonstrate that the Java Main application can still load the HelloWorld.classfile even though I had deleted it from the current directory because the Java launcher was explicitly told (via the -classpath option) to look for it in C:\hello. Using the extensions mechanism (optional packages), it is possible to have the class loaded without it being in the same directory and without explicit classpath specification. This is shown in the next screen snapshot.

The previous screen snapshot demonstrates that the Java launcher doesn't even need theHelloWorld.class in the same directory or specified on its classpath when that class is inside a JAR that is in the extensions (optional packages) directory. This is often cited as a benefit of using the extensions mechanism because all applications using that JRE (or potentially all applications on the host) can see the same classes without need to explicitly specify them on the classpath.

With the traditional classpath approach of instructing an application to load classes from JARs, the JAR file containing the .class file needs to end with the .jar extension. The next screen snapshot demonstrates what happens when the HelloWorld.jar is renamed HelloWorld.backup in the same classpath-referenced directory.

The last image demonstrates that a NoClassDefFoundError is encountered when the JAR file in the classpath-referenced directory does not have a .jar extension. Perhaps a bit surprisingly, the extensions (optional packages) mechanism does not work the same way. Instead, all JAR files in the extensions specified directory are loaded regardless of their extension and regardless of even if they have a file extension. This is demonstrated in the next screen image. 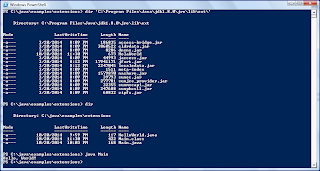 The previous image demonstrates that renaming the JAR file that resides within the extensions directory to not have any file extension whatsoever does not prevent the classloader from loading the classes of that JAR. In other words, the classloading mechanism loads all JAR files in the specified extensions directory based on file type rather than on file name or extension. As the Optional Packages Overview summarizes, "There is nothing special about any particular JAR file itself or the classes it contains that makes it an installed optional package. It is an installed optional package by virtue of its location in jre/lib/ext."

There are some risks and downsides associated with placing too many class definitions in JARs inside the extensions directory. It can be maddening to wonder why NoSuchMethodErrors, for example, are occurring when one can see that a class specified explicitly on the classpath has the method in question. I havepreviously written about one of the many potential causes of NoSuchMethodError, but forgotten outdated and obsolete class definitions residing inside of JAR files in the extensions directory are another potential cause. This is demonstrated next. 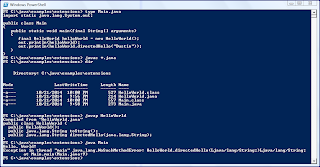 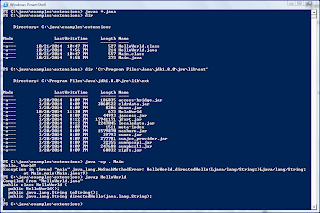 The example just demonstrated is not even the most difficult situation a forgotten JAR in the specified extensions directory (or directories) can cause. In that example, at least I had a NoSuchMethodError to alert me to a problem. A potentially even more difficult situation to debug can exist when the old class definition has the same method signature but has an outdated method implementation. In such cases, there may be no error, exception, or throwable of any kind, but the application logic will simply not work correctly or as expected. The old functionality could exist in the code base for some time before it's even recognized as an issue, especially if unit tests and other testing is lacking.

Elliotte Rusty Harold provides a warning about use of the extensions (optional packages) mechanism, "While this seems convenient, it is also a long-term mistake... Sooner or later (probably sooner), you'll load the wrong version of a class from a place you aren't even thinking about and waste hours debugging." The Java Tutorial also recommends caution (I added the emphasis), "Since this mechanism extends the platform's core API, its use should be judiciously applied. Most commonly it is used for well standardized interfaces such as those defined by the Java Community Process, although it may also be appropriate for site wide interfaces."

Although the extensions (optional packages) mechanism is similar to the classpath mechanism and both are used as part of class loading, the differences between the two are important to note. In particular, it is important to remember that all JAR files (even if they don't have .jar file extensions) that reside in the directory referenced as an extension directory will be loaded. Renaming these JARs and even changing their file extension will not be sufficient to have the classloading ignore them. With classpath, on the other hand, renaming the JAR is sufficient to prevent loading when the classpath specifies individual JAR files explicitly and changing the file extension is typically sufficient to prevent loading even when the classpath uses the wildcard (*) to specify all JARs in a directory.

There are situations when the extensions (optional packages) mechanism is the appropriate choice, but these seem fairly rare. It is also important to keep in mind the extensions (optional packages) mechanism in mind when dealing with unexplained NoSuchMethodErrors so that one can check it out to see if the offender lives in that directory or directories.