Sockets use TCP/IP transport protocol and are the last piece of network communication between two hosts. You do not usually have to deal with them since there are protocols built on top of them like HTTP or FTP; however, it is important to know how they work.

TCP: It is a reliable data transfer protocol that ensures that the data sent is complete and correct and requires to establish a connection.

Java offers a blocking and non-blocking alternative to create sockets, and depending on your requirements, you might consider the one or the other.

The Java blocking IO API is included in JDK under the package java.net and is generally the simplest to use.

This API is based on flows of byte streams and character streams that can be read or written. There is not an index that you can use to move forth and back, like in an array, it is simply a continuous flow of data. 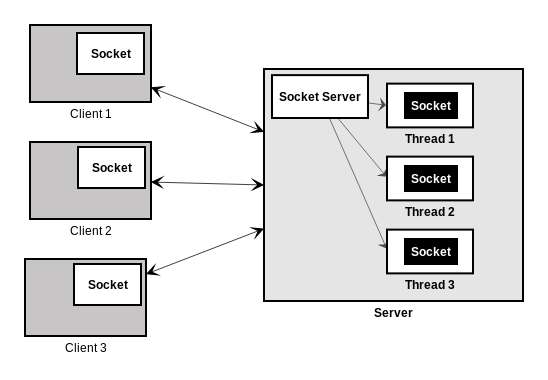 Every time a client requests a connection to the server, it will block a thread. Therefore, we have to create a pool of threads large enough if we expect to have many simultaneous connections.

If we want to allow multiple connections, we have to create a Thread Pool:

As you can see, this API has some limitations. We won’t be able to accept more connections than threads available in our machine. Therefore, if you are expecting to have many connections, you need an alternative.

Java.nio is a non-blocking API for socket connections, which means you are not tight to the number of threads available. With this library, one thread can handle multiple connections at once.

We will use an Echo Socket Channel server to show how NIO works.

Choosing between IO and NIO will depend on the use case. For fewer connections and a simple solution, IO might be a better fit for you. Whereas, if you want something more efficient that can handle thousands of connections simultaneously, NIO is probably a better choice, but bear in mind that it will introduce much code complexity. However, there are frameworks like Netty or Apache MINA that are built on top of NIO and hide the programming complexity.

Published at DZone with permission of Sergio Martin. See the original article here.