i recently came across java phasers while reviewing different constructs for inter-thread communication. phasers are associated to the concepts of fuzzy barriers and point-to-point synchronization .

as for this post, i will borrow the example of the one-dimensional stencil to explain very intuitively the motivation behind the concept of phasers.

the code corresponding to all the examples in this post can be found on this repository .

in order to justify the need for phasers, we will start by demonstrating the use of other synchronization constructs to solve the computational problem of the one-dimensional stencil.

given a one-dimensional array a with n elements, the value of each element is calculated according to this function:

just a brief digression for those curious about physics: the aforementioned wikipedia link says that “stencil codes are most commonly found in the codes of computer simulations.” no wonder! you can picture the one-dimensional stencil as a metal bar connected to a heat source by its sides. the temperature of the sides remains constant whereas the temperature along the bar changes over time until reaching thermal equilibrium.

to get some intuition about the stencil problem, let’s work through an example. to make it simple, consider an array of length 4 whose first and last elements have a fixed value 1. the remaining elements have an initial value of 2. therefore, the initial array is [1,2,2,1]. after the first iteration, the array becomes [1,1.5,1.5,1]. the following diagram shows how the values change on each iteration and how, eventually, the values converge to 1. 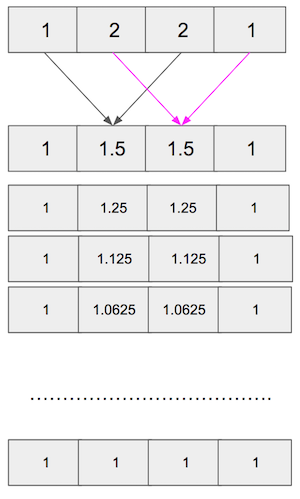 and the snippet below is the sequential implementation of the algorithm (the code snippets presented in this post are written in scala, although any java developer can easily read them):

working on top of the sequential solution, this section describes other approaches to solve the problem using different parallel-programming constructs: latch, cyclic barrier, and phasers .

according to countdownlatch , a latch is “a synchronization aid that allows one or more threads to wait until a set of operations being performed in other threads completes.”

the solution to the stencil problem with latches involves the following steps:

it is worth noting that:

the following diagram represents 2 iterations of the process just described: 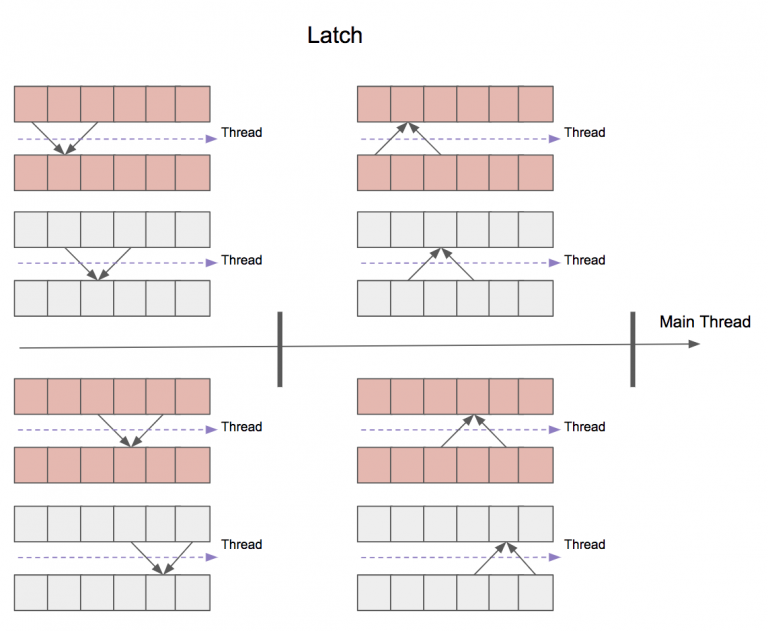 from the definition of cyclicbarrier , a cyclic barrier is “a synchronization aid that allows a set of threads to all wait for each other to reach a common barrier point.”

here are the main characteristics of this solution:

this problem seems a good match for a cyclic barrier and comprises the following steps:

the main features of this algorithm are:

the following diagram represents two iterations of the process: 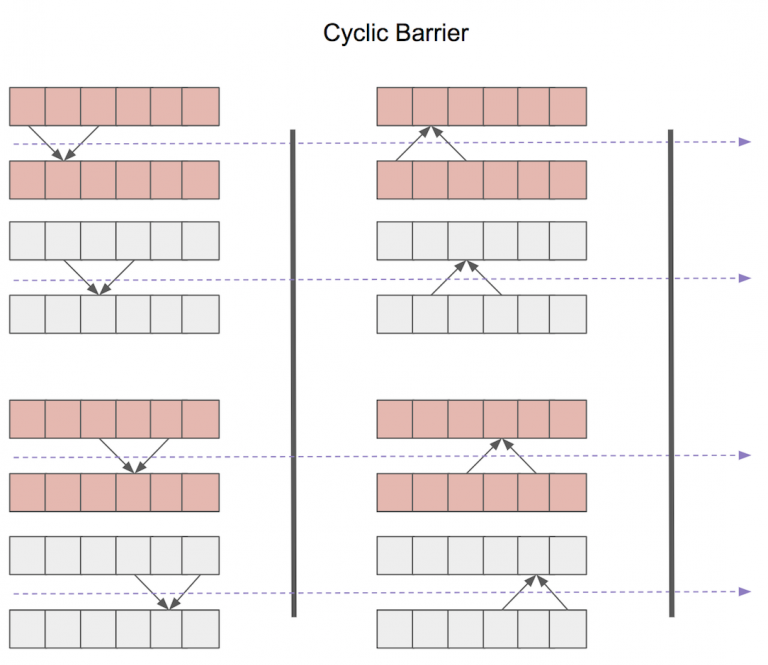 phasers allow you to reduce the synchronization contention cost when there is a large number of parties. in order to understand this, let’s revisit the cyclic barrier example: we said that “before moving on to a new iteration, each task needs to wait for all others to complete,” and as a consequence, there is a common barrier for all threads.

well, the above statement is not completely true. strictly speaking, each task needs to wait only for the adjacent tasks that compute the value of its neighbors. therefore, the situation is better described by the following diagram, where each thread shares a barrier with the adjacent ones. this fine-grained synchronization is achieved through the use of phasers. the implementation details can be found in the source code . 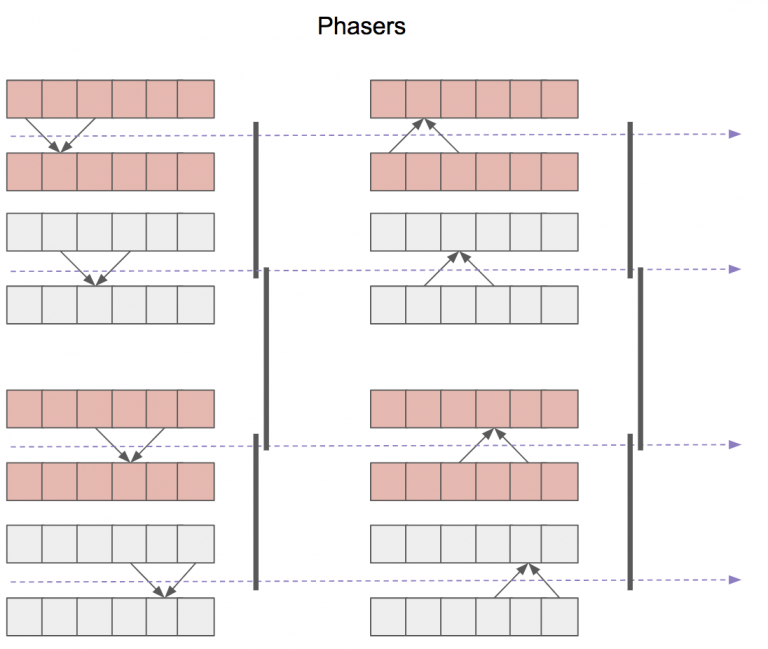 when dealing with cycling barriers and phasers, it was mentioned that the number of threads needed is n-2. for large arrays (think of millions of elements), this is not feasible. you will get the dreaded

and even if it were possible to create so many threads, the operating system would struggle to handle them all with a limited number of cpus.

in order to get around this issue, the elements of the array can be grouped and then create a task for each group. each task will calculate the values of all the elements of that group in a sequential fashion, and the creation and synchronization of barriers will happen at the group level.

as discussed in the previous section, the different approaches could be:

let’s take a closer look at the last point. in reality, a thread only needs to wait for the first/last element of the adjacent groups to be calculated. therefore, each thread can:

this is called phasers with split-phase barriers or fuzzy barriers . this capability to perform local work within the barrier is another main characteristic of phasers, together with the capability to make fine-grained synchronization possible.

the following diagram illustrates the idea of fuzzy barriers. the diagram represents a 12-element array divided in 3 groups of 4 elements. to keep things simple, we will focus on the barrier shared by the first and second groups. 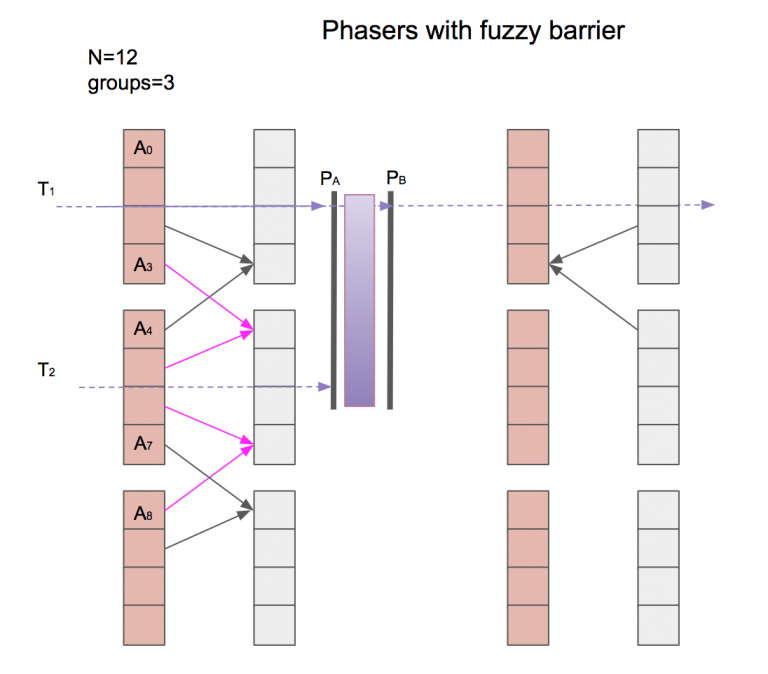 each thread t x calculates the value of all elements in that group, starting with the values on the sides.

for instance, t 1 calculates a 3 , reaches p a , and signals it out to the other threads. then, it proceeds to calculate the rest of the elements in the group and, when it is done, waits on p b until t 2 reaches p a .

when t 2 has calculated a 4 and a 7 , it reaches p a and emits the corresponding signal. at this point, t 1 can progress to phase 2 while t 2 completes phase 1 by calculating the rest of the elements of its group, and so on.

the journey from the latch solution to phasers has led us to reduce the synchronization contention costs by means of:

the code for all the examples discussed in this post can be found on this repository .