Function-as-a-Service or Serverless is the most economical way to run code and use the cloud resources to the minimum. The serverless approach runs the code when a request is received. The code boots up, executes, handles the requests, and shuts down. Thus, utilizing the cloud resources to the optimum. This provides a highly available, scalable architecture, at the most optimal costs. However, serverless architecture demands a faster boot, quicker execution, and shutdown.

I had blogged about GraalVM here. Please refer to the following blogs, for better understanding of the architecture of Graal VM and how it builds on top of Java Virtual Machine

In these blogs, I will talk about how GraalVM embraces polyglot, providing interoperability between various programming languages. I will then cover how it extends from Hotspot, and provides faster execution, and smaller footprints with 'Ahead-of-time' compilations and other optimizations.

In this blog, let's focus on building a simple KG to Pounds converter function in Java. First, we will build a serverless application with Java, and then later build it using GraalVM native image. We will then compare how fast and small GraalVM implementation is.

The fn server runs in docker, you can check that by running docker ps The screenshot below shows, what I am able to see on my computer.

Now we can generate the boilerplate code with:

This creates a folder converterFunc with all the boilerplate code:

Let's inspect what is inside that folder. You will see a func.yaml, pom.xml & a src folder

func.yml is the main manifest yaml file that has the key information about the class that implements the function and the entry point. Let's inspect that:

fn has all the information that it needs in this yaml to build and run the function when it is invoked.

We see the repository from where the fn dependencies are to be pulled: 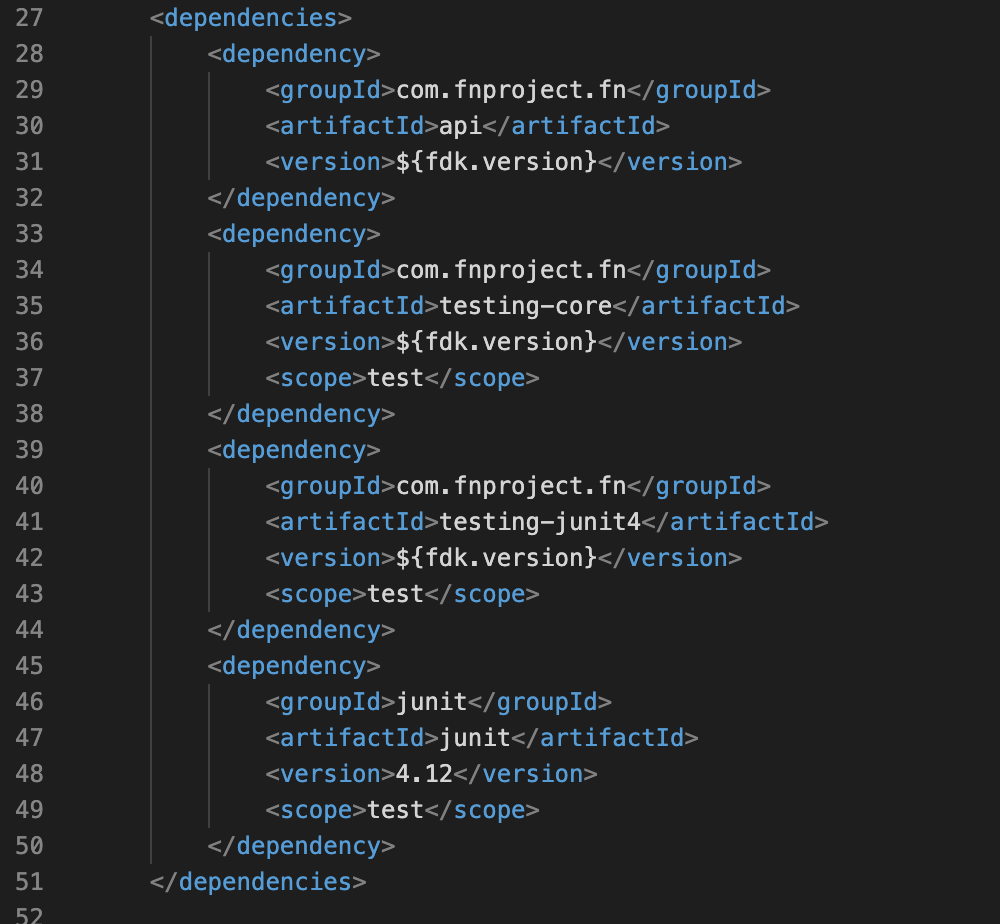 In the src folder we will find HelloFunction.java, which is the default boilerplate code that is generated by fn.

The code is very straight forward. It has a handleRequest () method, which takes in the String as a input and returns String as an output. we can write our function logic in this method. This is the method that fn, calls when we invoke the function.

Let's build our converter application. I am going to deploy it into the path src/main/java/com/abvijay/converter , and the name of my Class is ConverterFunction.java 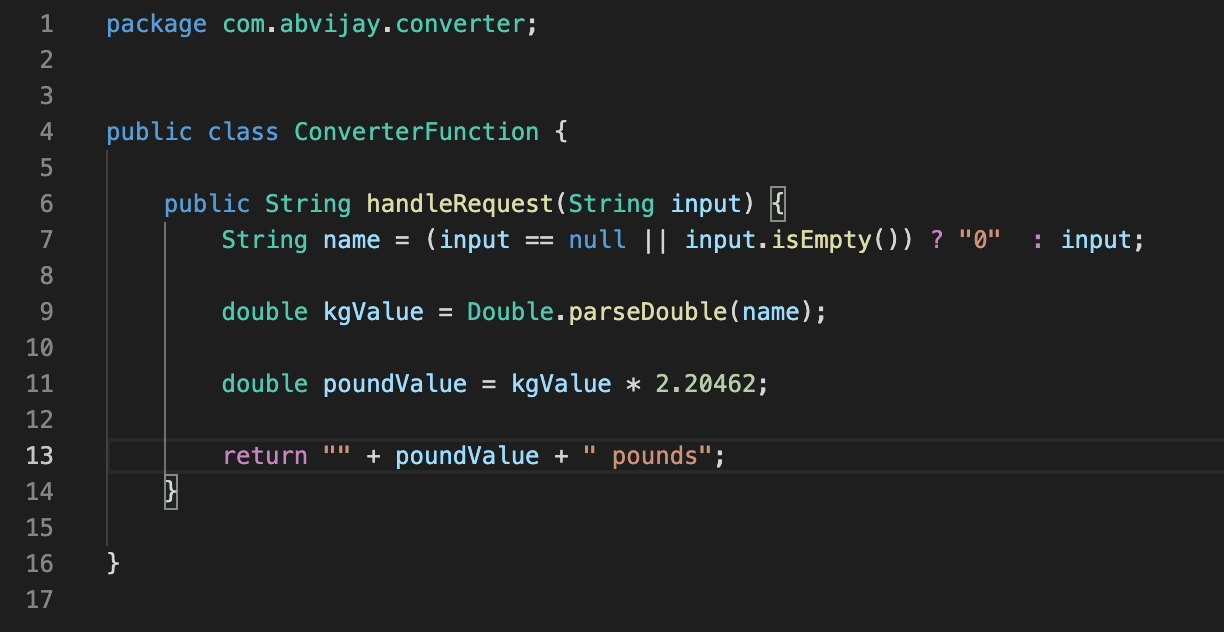 The code is very straight forward. I am just expecting a kgs value in String, converting that to Double and calculating pound value and returning that back as a String. (I did not write a lot of exception handling, to check for edge conditions, to keep it simple.)

Now we need to update the func.yaml to point to our new Class.

Check line number 7, which is changed to point to the new class and method.

4. Build and Deploy the Serverless Container to Local Docker

Functions are grouped into applications. an application can have multiple functions. That helps in grouping them and managing them. So we need to create a converter-app:

Once the app is created, we can now deploy the app.

fn deploy command will build the code using maven, package it as a docker image, and deploy it to the local docker runtime. fn can also be used to deploy to the cloud or K8s cluster directly.

Let's now use the docker images command to check if our image is built.

We can also use fn inspect to get all the details about the function, this helps in the discovery of the services.

Now let's invoke the service, since our function expects a input argument in number, we can pass it using a echo command and pipe the output to fn invoke to invoke our function

We can see the result coming from the function. Now let's run the same logic on GraalVM

6. Run on GraalVM, as a Native-image

The base image for GraalVM is different, we use fnproject/fn-java-native-init, as the base, and initialize our fn project with that:

This fn configuration works differently. It also generates a Dockerfile, with all the necessary Docker build commands. This is a multi-stage docker build file. Let's inspect this docker file:

Now we need to change line 48 to point to our class. let's replace that with: CMD [ "com.abvijay.converter.ConverterFunction::handleRequest" ]

Another important configuration file, that we need to change reflection.json under src/main/conf This JSON file has the manifest information about the class name and the method:

Let's change that to:

Now let's create a new app and deploy this app and run and see:

There you go, our code is now running on GraalVM. So what's the big deal. When I ran docker images, I see the size of the Java image as 223 MB and the GraalVM image is just 20MB. That is a 10-times smaller footprint.

When I timed the function calls, the Java function took around 700ms while GraalVM took around 460ms. That is almost 30% faster. For functions with more complex logic, the differences will be much more significant. 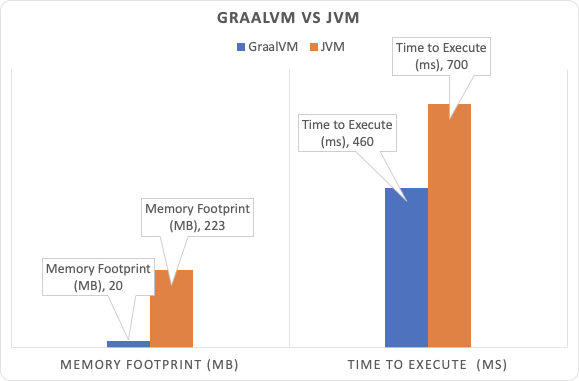 Java hotspot might catch up with this number, but that is provided the function runs longer, and the Just in time Compiler kicks in to optimize the code. Since most of the functions are expected to be quick and short running, it does not make sense to compare these JIT benchmarks.