Join For Free
This article will provide you with a tutorial on how you can quickly pinpoint the Java Thread contributors to a high CPU problem on the Windows OS. Windows, like other OS such as Linux, Solaris & AIX allow you to monitor the CPU utilization at the process level but also for individual Thread executing a task within a process.

For this tutorial, we created a simple Java program that will allow you to learn this technique in a step by step manner.

The following tools will be used below for this tutorial:

The simple program below is simply looping and creating new String objects. It will allow us to perform this CPU per Thread analysis. I recommend that you import it in an IDE of your choice e.g. Eclipse and run it from there. You should observe an increase of CPU on your Windows machine as soon as you execute it.
Step #1 – Launch Process Explorer

The Process Explorer tool visually shows the CPU usage dynamically. It is good for live analysis. If you need historical data on CPU per Thread then you can also use Windows perfmon with % Processor Time & Thread Id data counters. You can download Process Explorer from the link below:
http://technet.microsoft.com/en-us/sysinternals/bb896653

In our example, you can see that the Eclipse javaw.exe process is now using ~25% of total CPU utilization following the execution of our sample program. 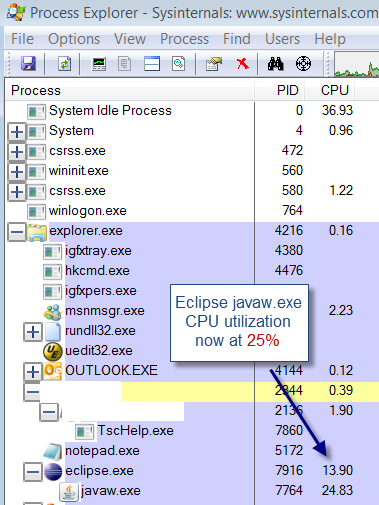 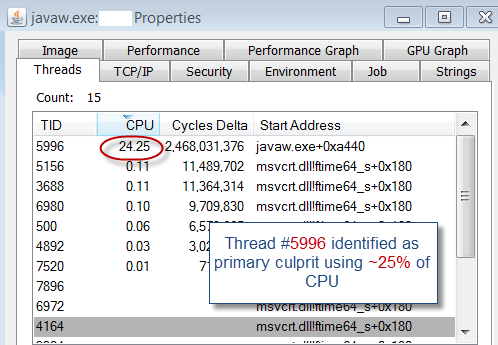 At this point, Process Explorer will no longer be useful. The goal was to pinpoint one or multiple Java Threads consuming most of the Java process CPU utilization which is what we achieved. In order to go the next level in your analysis you will need to capture a JVM Thread Dump. This will allow you to correlate the Thread Id with the Thread Stack Trace so you can pinpoint that type of processing is consuming such high CPU.

JVM Thread Dump generation can be done in a few manners. If you are using JRockit VM you can simply use the jrcmd tool as per below example: 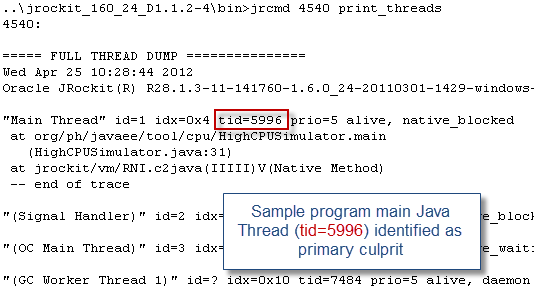 Once you have the Thread Dump data, simply search for the Thread Id and locate the Thread Stack Trace that you are interested in.

For our example, the Thread “Main Thread” which was fired from Eclipse got exposed as the primary culprit which is exactly what we wanted to demonstrate.
Step #4 – Analyze the culprit Thread(s) Stack Trace and determine root cause

At this point you should have everything that you need to move forward with the root cause analysis. You will need to review each Thread Stack Trace and determine what type of problem you are dealing with. That final step is typically where you will spend most of your time and problem can be simple such as infinite looping or complex such as garbage collection related problems.


In our example, the Thread Dump did reveal the high CPU originates from our sample Java program around line 31. As expected, it did reveal the looping condition that we engineered on purpose for this tutorial.

I hope this tutorial has helped you understand how you can analyze and help pinpoint root cause of Java CPU problems on Windows OS. Please stay tuned for more updates, the next article will provide you with a Java CPU troubleshooting guide including how to tackle that last analysis step along with common problem patterns.
Java (programming language)