Unlike many other computer languages, Java provides built-in support for multithreading. Multithreading in Java contains two or more parts that can run concurrently. A Java thread is actually a lightweight process.

This article will introduce you to all the Java Thread concepts many people find tricky or difficult to understand.

I'll be covering the following topics:

Before we proceed with the first topic, consider this example:

Imagine a stockbroker application with lots of complex capabilities, like

These are time-consuming functions. In a single-threaded runtime environment, these actions execute one after another. The next action can happen only when the previous one has finished.

If a historical analysis takes half an hour, and the user selects to perform a download and check afterward, the warning may come too late to buy or sell stock. This is the sort of application that cries out for multithreading. Ideally, the download should happen in the background (that is, in another thread). That way, other processes could happen at the same time so that, for example, a warning could be communicated instantly. All the while, the user is interacting with other parts of the application. The analysis, too, could happen in a separate thread, so the user can work with the rest of the application while the results are being calculated.

This is where a Java thread helps.

What Is a Java Thread?

A thread is actually a lightweight process. Unlike many other computer languages, Java provides built-in support for multithreaded programming. A multithreaded program contains two or more parts that can run concurrently. Each part of such a program is called a thread and each thread defines a separate path of the execution. Thus, multithreading is a specialized form of multitasking.

The Java run-time system depends on threads for many things. Threads reduce inefficiency by preventing the waste of CPU cycles. 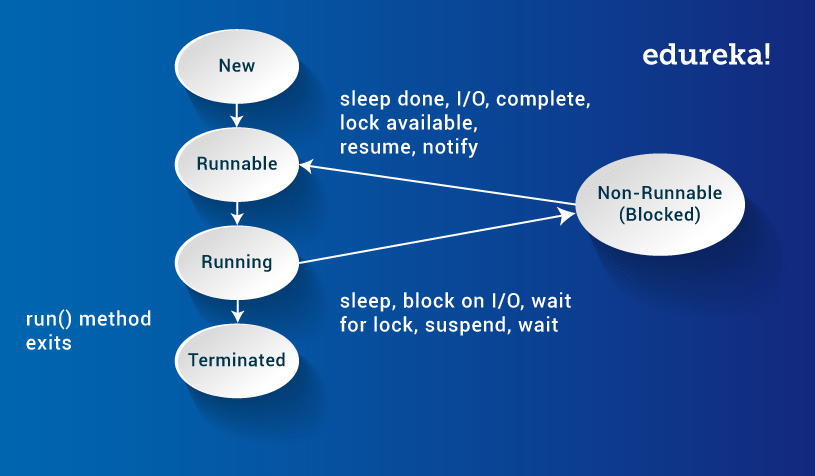 Now let's jump to the most important topic of Java threads: thread class and runnable interface.

Java's multithreading system is built upon the Thread class, its methods, and its companion interface, Runnable. To create a new thread, your program will either extend Thread or implement the Runnableinterface.

Now let's see how to use a Thread that begins with the main java thread that all Java programs have.

Here, I'll show you how to use Thread and Runnable interface to create and manage threads, beginning with the main java thread.

Why Is Main Thread So Important?

How to Create a Java Thread

Java lets you create a thread one of two ways:

Let's look at how both ways help in implementing the Java thread.

The easiest way to create a thread is to create a class that implements the Runnable interface.

To implement Runnable interface, a class need only implement a single method called run( ), which is declared like this:

Inside run( ), we will define the code that constitutes the new thread. Example:

To execute the run() method by a thread, pass an instance of MyClass to a Thread in its constructor (A constructor in Java is a block of code similar to a method that's called when an instance of an object is created). Here is how that is done:

When the thread is started it will call the run() method of the MyClass instance instead of executing its own run() method. The above example would print out the text "MyClass running ".

The second way to create a thread is to create a new class that extends Thread, then override the run() method and then to create an instance of that class. The run() method is what is executed by the thread after you call start(). Here is an example of creating a Java Thread subclass:

To create and start the above thread:

When the run() method executes it will print out the text " MyClass running ".

So far, we have been using only two threads: the main thread and one child thread. However, our program can affect as many threads as it needs. Let's see how we can create multiple threads.

The output from this program is shown here:

This is how multithreading in Java works. I hope this was informative and helpful to you. In the next entry of my Java Tutorial Blog Series, you will learn about Java Collections.

You can also learn Java through our YouTube Java Tutorial playlist. Happy Learning!