I'm guessing there are many companies on the verge of upgrading to a newer Java version because developers love to upgrade, but besides this adventurous attitude, there is also fear. The biggest fear of such a change is that applications can produce unexpected behaviors. In my opinion, the root of this fear is the GC system, the fear of the unknown.

First, we will do a quick walkthrough of how memory management architecture looks, what kind of GC algorithms are available, and what GC types exist. We will then go over how to come up with a plan that is safe and can persuade management that switching to a newer Java version won't be the end of worlds. If you are pretty confident on how the GC works, you can skip to the end of the article where the TODOs are listed. For others, let's start with the architecture for the JVM.

Many modern MM systems split the available memory into to two key parts based on the type. MetaData (MetaSpace/PermGenSpace) is where you store how data is represented. In Java, this storage is mostly populated by ClassLoaders when loading a class for the first time. This contains, for example, which methods are available in the loaded class and what types of data can be stored in a particular field. Runtime constant pools can also can be found here. 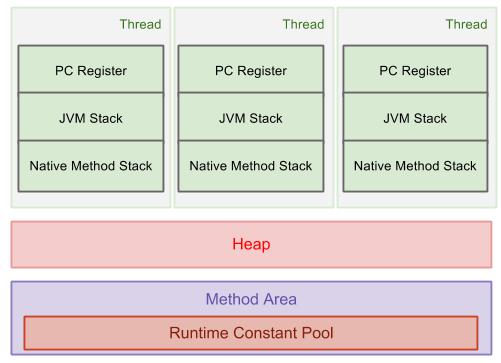 The other part is where the actual runtime data resides, known as Java Runtime Memory. This can further be split into two parts, Stack and Heap. The Stack holds data like method local variables, callstack, and Thread-related metadata. They are of relatively small size (~1MB).

Meanwhile, the Heap holds Object Instance-related data, like actual content of a field defined in your class. Where does Thread-related data get stored? When a thread is started, the JVM allocates a stack separate from the Heap and MetaSpace. Besides size, the Heap also has an important property — how long we actually use certain memory parts.

But why do engineers create this kind of complexity around memory management? Just so they can ask fancy interview questions, or maybe so Oracle can sell support on how to tune your JVM? Behind every complicated solution, there is the desire to building something better. The reason is to have better optimized Garbage Collection systems.

We know that memory is finite, so if we are not freeing it up efficiently, we are going to run out of it eventually, leading to us furiously reading the 'java.lang.OutOfMemoryError' class's Javadoc. When dealing with sophisticated languages, the allocation and freeing of memory is taken care of by the environment. Many things can happen in the background, but basically, the pseudo code for GC is the following.

This doesn't sound too complicated, right? Well, for starters, this can be quite expensive in processing power. You can create objects that can't be reclaimed by the GC, or the GC algorithm simply can't keep up if your application receives a higher load. When GC runs, Threads in the JVM can be suspended and make your application unresponsive.

You either die as an Object part of the Young generation, or live long enough to see yourself end up in the Old generation.

Engineers found out that most application data falls into two categories — data that is collected quickly or data that stays around for a long time. The gain here is that you don't have to run GCs so frequently on the old generation, thus saving a lot of processing power. Of course, objects of the Old Generation can refer to YoungGeneration objects — these are cross-generational links. The JVM has a way of dealing with this — splitting up the Young Generation into three more regions, Eden, Survivor1, and Survivor2.

Based on this information, we can categorize different Garbage Collections strategies.

* If it fails, it can trigger MajorGC, which can eventually have latency effects
If you are interested in what events are happening in your JVM regarding GC runs, you can start the JVM with -XX:+PrintGCDetails .

We can decide which GC algorithms fit best for our needs.
Examples: -XX:+UseSerialGC, -XX:+UseG1GC, and -XX:-UseConcMarkSweepGC

These can be fine-tuned even more with additional parameters, but tuning the GC should be a last resort.

Memory problems are hard to detect because they are not strictly bound to functional behavior. You can greenlit a project that worked fine for the e2e test and the 5 QA people, but that will break with real load in production in minutes. Know what is happening in your application! If you have already released your software, this should be on point and may only need minor tweaks. If not, you are probably doing blood sacrifices after every retro. Some important measurement values: Memory usage, request response time, threadcount, CPU usage, connections, and GC statistics (-XX:+PrintGCDetails).

These values should be stored as a data series so you can see behavior trendlines. You need to define your system's current thresholds.

You will constantly compare to this baseline. Anything worse is not acceptable. If the values start to worsen, it is worth doing an investigation. Try to isolate parts of your system. Threads are also a huge help for such investigations.

So now we know what kind of GCs there are, how are they triggered, what they can cause, and what properties a Minimum Viable Monitoring System (MVMS) should contain. With this knowledge, and after reading many other articles, you can start creating a plan for making a switch. We did this kind of upgrade from Java 7 to Java 8. I tried to create a list of TODOs on what we did for such an upgrade.

Published at DZone with permission of Laszlo Nardai. See the original article here.