the long awaited 1.0 release of the javafx sdk is available, so i'd like to help you get up to speed by building an application with you.  some upcoming posts in this blog will continue what we've started today, and along the way we'll work closely with expert graphic designer mark dingman of malden labs.  first, you need to get the javafx sdk:

everything that you'll need to get started is freely available at javafx.com , so please go there and download the javafx sdk 1.0, bundled with netbeans 6.5.  you can download it without netbeans ide, but there are a boatload of examples that you can easily build and run with netbeans ide.

overview of the api packages

included in the javafx sdk download is the api documentation.  take a look at this documentation, and then i'd like to give you a brief tour of the more commonly used api packages and classes, especially the ones that we're likely to use in the application that we build together.

the javafx.stage package contains a class named stage , which is the top level of the ui containment hierarchy for any javafx application, regardless of where it is deployed (e.g. desktop, browser, or mobile phone).

the javafx.scene package contains some classes that you'll use often:

there are several packages that begin with javafx.scene that contain subclasses of node of various types.  for example:

the javafx.scene.shape package contains several classes for drawing shapes such as circle , rectangle , line , polygon and arc .  the base class of the shapes, named shape , contains an attribute named fill that enables you to specify a color or gradient with which to fill the shape.

the javafx.scene.text package contains the text class for drawing text in the scene.  the font class enables you to specify the font name and size of the text.

the javafx.scene.media package has classes that enable you to play media.  the mediaview class is a subclass of node that displays the media.

although it doesn't begin with javafx.scene, the javafx.ext.swing package contains ui controls (such as swingbutton and swingslider ) that subclass node .  many of the swing "components" are available in this package, and because these components are actually nodes, any of the transforms and other capabilities of node are available with these classes.  also, any swing components that aren't in this package may be used in javafx by wrapping them with the wrap function of the swingcomponent class.

the javafx.scene.control package is the way that ui controls in javafx are headed.  in the javafx sdk 1.0 there is just one control -- the textbox class, but future versions will have more.  each ui control will have the ability to be skinned, and styled via css.

the javafx.scene.input package contains classes such as mouseevent and keyevent that provide information about these events from within an event handler function such as the node class' onmouseclicked event.

the javafx.scene.layout package contains a couple of layout nodes named hbox and vbox , which enable you to arrange nodes horizontally or vertically, respectively.  the spacing attribute on these classes specifies the space between the nodes.  i fully expect more layout nodes to be available in future versions of the javafx sdk, and you can write your own (like the simple tablenode that i created in an earlier blog post ).  also, there is an initiative underway by stephen chin and keith combs (the co-conspirators behind the widgetfx project ) called jfxtras .  this initiative will create useful javafx classes, including layout classes, that will augment what is available in javafx releases.

the javafx.io.http , javafx.data.pull , and javafx.data.xml packages provide a way to communicate with servers via http, json and xml from any javafx enabled device (e.g. desktop and mobile phones).

take a look at the javafx api docs again in the light of the information above to get a deeper sense for how you can use its capabilities.  now let's write some code!

the humble beginnings of our application

i've chosen a simple calculator as a good project to facilitate learning the javafx sdk 1.0, and here is the comp from our graphic designer mark dingman: 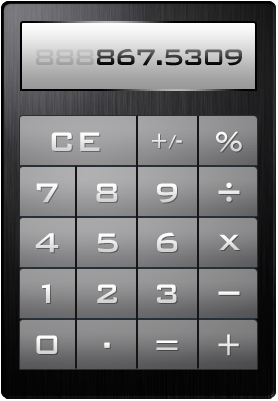 we'll take some baby steps by by writing code that creates some of the basic ui for the calculator.  here's a screenshot of the first incarnation of our calculator application, missing a few essential keys.  click on the launch icon to run it as a java web start application in its own window.

note: before looking at the code for the simple calculator below, please note that some techniques used in this program are for teaching purposes only, and would not be used in a "real" program.  for example, the matrix of swingbutton controls is begging for a "for" expression which will be covered in a future incarnation of this program.

the overview of the api packages section above should help you understand what is going on in the program.  there are a couple of concepts worth focusing on here:

the javafx sdk 1.0 distribution provides for building javafx script applications from the command line, or from the netbeans ide 6.5.  i've been using the ide approach lately because netbeans ide generates the deployment code for you.  go ahead and create a netbeans ide project using the file->newproject wizard, and cut/paste the code from this post into a file named simplecalc.fx in a package named javafxpert .  then in the project properties dialog, shown below, choose the run category and then an application execution model (such as run in browser ).  when you run the application, it will run using the chosen execution model. 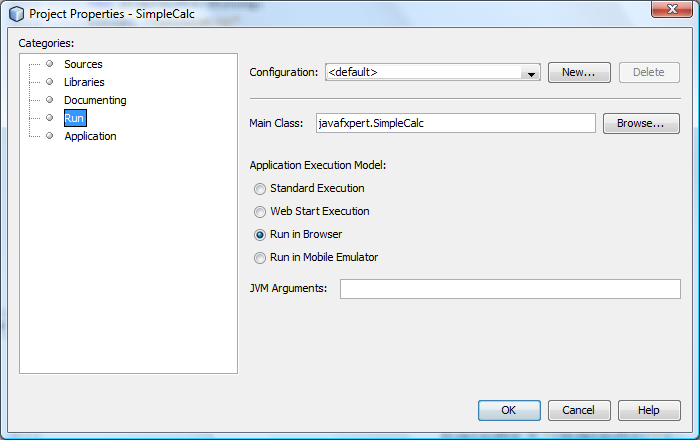 you can control the dimensions of a javafx applet running a browser by visiting the application category/page in the dialog above.  in that page you can also make decisions like whether to allow the user to drag the applet out of the browser, and whether to generate pack200 compressed files that contain your application.

hope i didn't throw too much at you today, but i wanted to give you a jump start in developing javafx applications.  please leave a comment if you have any questions.