The third and final keynote, the Java Community Keynote, started the final day of JavaOne 2012. Although the first two keynotes were held in the Masonic Center, this one was held in Hilton Continental Ballroom. 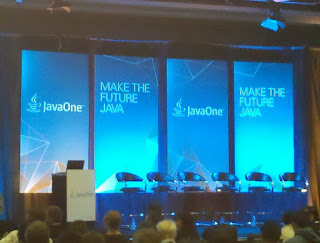 Sharat Chander started the Community Keynote at the 17th JavaOne (JavaOne 2012). He stated that sixty percent of JavaOne 2012's content has been presented by the community. He said JavaOne is "by the community and for the community." He had those who participated on the submission committee stand up to receive recognition and applause. Chander's opening was perfect: it recognized the community, it was enthusiastic and was an appropriate duration.

Donald Smith joined Chander on the stage, acknowledged Chander's contributions to JavaOne, and started a wave in the audience in Hilton Continental Ballroom.

Gary Frost joined Donald Smith on stage to talk about Project Sumatra and Aparapi. It sounds like Project Sumatra is currently planned for JDK 9 (giving JDK 8 a change to introduce Lambda expressions).

An expert panel came to the stage to talk about their respective organizations' participation in the Java ecosystem. There were representatives from Eucalyptus, Twitter (Chris Aniszczyk, who stated that Twitter is built on JVM with Scala and Netty), Cloudera, Eclipse Foundation (Mike Milinkovich stated that the majority of Eclipse projects use Java), and Perrone Robotics (Paul Perrone).

One of the panelists stated that "low egos and high ambition level" coupled with desire to be truly innovative are what "smart venture capitalists" look for in startups. Another panelist stated, "Communities are great at innovation because they are open."

Georges Saab came to the stage to introduce one of the Duke's Choice Award winners. He had Martijn Verburg join him to talk about the London Java Community winning an award. Martijn talked about organizing a Java Users Group and the Adopt-A-JSR Program. Although I normally loathe the mixing of politics with technical seminars (my one and only complaint about the Colorado Software Summit), I have to admit that I laughed out loud when Verburg joked "if the presidential elections don't work out...the queen has agreed to take you back as a colony."

In another humorous quote, Bruno Souza explained Brazil's recent World Cup woes, "You cannot be good at everything, so Brazil will be good at Java." I also found another perspective of his interesting concerning spoken language (Portuguese/English) issues related to a programming language: "The important thing that user groups do is translate - to the local language, between technologies, and to bridge culture gaps" (as quoted by Trisha Gee). John K. Waters also captured another related Souza quote: "Java is the lingua franca" that transcends other language differences."

Paul Perrone of Perrone Robotics returned to the stage to discuss how Perrone Robotics uses Java with their Rumbles robotic vehicle. The bot used for the demonstration (Rumbles's "little brother") is built for outdoor use, so it had duct tape on its wheels so that it could have better traction inside (he said think chains on tires).

James Gosling was introduced with a bit of drama to talk about Liquid Robotics (Guillermo Castro called it!). Gosling explained that the robot he was talking about is not like the robots most of us think about with wheels or legs and arms. He talked about use of ARM processors, running Linux, and embedded C code.

One of the challenges Gosling discussed is to use as little power as possible, especially when in the "middle of a storm in the arctic" with no ability to use solar recharge. Due to high "Iridium satellite communication costs" ($1/kb or one million dollars for a terrabyte), they focus on using approach of short texts for communication. Gosling quipped, "We don't have a Big Data problem." Although they don't have a lot of data, what they do have is "precious." Gosling explained some of the hazards their robots face including big waves and even sharks.

Gosling built his own "NoSQL-ish" database and he said this was "either the most exciting thing or stupidest thing" he has done in a while. Gosling said he's been "a real Jelastic fan."

Although Gosling's presentation was interesting in its own right, I think the "effect" of having someone so obviously connected to Java and JavaOne return to speak at a JavaOne keynote (on the "other side" [community]) was probably more significant than the message itself.

As is typically the case with JavaOne keynotes, the Community Keynote went past its scheduled end time of 10:30 am. Gosling was allowed to take more than his allotted time, but this is not a big surprise for the "Father of Java." Gosling showed a demonstration using NASA World Wind (his "favorite Swing application," like "Google Maps with a real API"). Gosling stated to some applause, "It makes my head explode when there are people who think you can do everything in HTML." Gosling pointed out that he does like HTML and especially likes jQuery, but pointed out that some things are simply out of the realm of HTML still.

After throwing out some t-shirts, Chander asked for attendees to fill out the surveys to help make JavaOne more about the community. He also encouraged attendees to share knowledge with students and others wanting to learn Java. It has also been announced that Stephen Chin will be chair of next year's JavaOne.

Community has been a big theme of this edition of JavaOne and the Community Keynote is just one part of that. I have heard pleas for help and feedback from the community in a large percentage of the presentations and keynotes that I have attended this year.