But, no one seems to explain, in simple terms, what it actually means. What’s the relation between a Turing "machine" and the JavaScript "language"? Also, most people use jargon to explain jargon like so:

In computability theory, a system of data-manipulation rules (such as a computer’s instruction set, a programming language, or a cellular automaton) is said to be Turing complete or computationally universal if it can be used to simulate any single-taped Turing machine. The concept is named after English mathematician Alan Turing. A classic example is lambda calculus.

So, this is my attempt at explaining these concepts simply.

Alan Turing came up with a hypothetical machine that could take any program of any complexity and run it. It could be implemented using a simple tape, a head that moves left and right, could store data by reading, writing, and erasing the contents of square cells. Given long enough tape and enough time, it could compute any program.

In other words, he explained how someone can build a computer. And called the computer a "Turing machine."

So Powerful, Yet So Simple

Turing machines soon became very popular, and eventually a standard because, while they provided a powerful mechanism to calculate anything, they were also easy to understand. As described in the video below, Turing machines use a tape to keep track of states and run computations.

One other jargon you’ll hear about Turing machines is the concept of “single” tape.

A calculator is a good example of a Turing incomplete machine because it can only perform a small pre-defined subset of calculations.

However a home computer (Mac or a PC) is a Turing complete machine because it can do any calculation that a Turing machine can do if we give it enough memory and time.

If you think about it, a Turing machine is just a concept—it means that any "thing"(physical or virtual) that takes any program and runs it is essentially a Turing Machine. And if that "thing" can run every program that a "Turing Machine" can run, then it is called "Turing Complete."

Now, if you think about any modern programming language, they also take programs (written by us) as input and run them. Further, any program that can be theoretically written to run for a Turing machine can also be written in JavaScript. Thus, JavaScript is Turing complete. 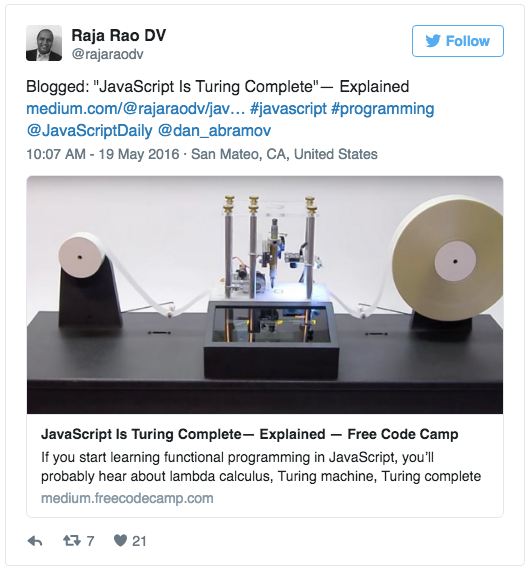