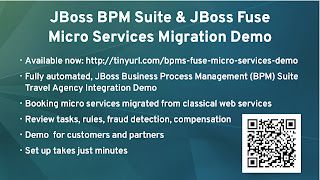 Early this year we announced the exciting example project for JBoss BPM Suite that centers around a working online Travel Agency project.

This initially leveraged web services, that we later migrated to microservices with the help of JBoss Fuse.

With the release of JBoss Fuse 6.2, we wanted to revisit the project and make sure you had the latest, greatest products at your disposal.

With a bit of work, some spit and polish, we think you will enjoy the all new JBoss BPM Suite & JBoss Fuse Travel Agency Integration Demo up to date and feel that you have a great example of their microservices integration capabilities.

This demo is brought to you in part by our very own Christina Lin who is the JBoss Technology Evangelist that focuses on JBoss Fuse & messaging products. If you have a use case you would like to see then just let us know by raising an issue on the project.

The project can be found on github and has documentation to get you up and running in minutes.

Upon starting the server you will find a JBoss BPM Suite setup with the Travel Agency project ready for you to inspect, build and deploy for use by the JBoss Fuse microservices you will be deploying in their own containers.

The JBoss Fuse component of this demo consists of pre-configured microservice containers which we will then have you start once JBoss Fuse has started. Once they are up and running each instance of booking a flight will leverage the microservices which you can view in the JBoss Fuse console.

The following steps will get you up and running in a matter of minutes with this fully automated and repeatable demo: