Network service automation-related requirements are usually realized by means of commercial or open-source network orchestrator or controller software system. However, for some temporary or urgent needs, software patch or version development, upgrade, and change are often involved, which sometimes makes network engineer feel like "to break a fly upon a wheel". In fact, it can be realized through a light-weight way, JMeter Netconf plug-in implementation and network service automation process customization without compiled code based on JMeter framework.

Because the Netconf client just need the CRUD operations on the network device configuration data, so the plug-in only need support the following functions in the Netconf protocol stack: the configuration data in the content layer, all of the operation layer such as get-config, edit-config, etc., rpc, rpc-reply in the message layer, ssh in the secure transport layer. 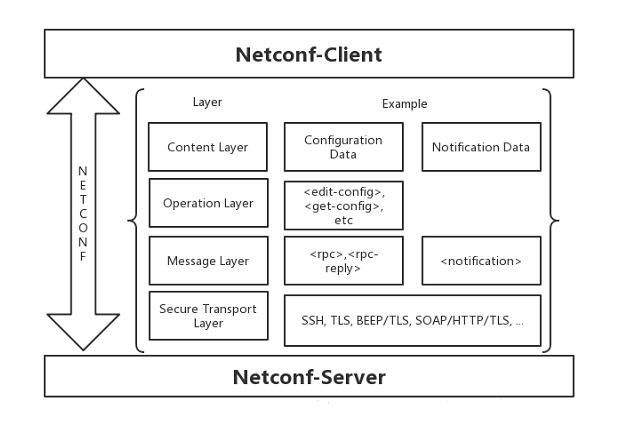 JMeter online document has provided the guide about the plug-in development, the self-defined class, the related JMeter framework class and the relations between them have been described as follows. 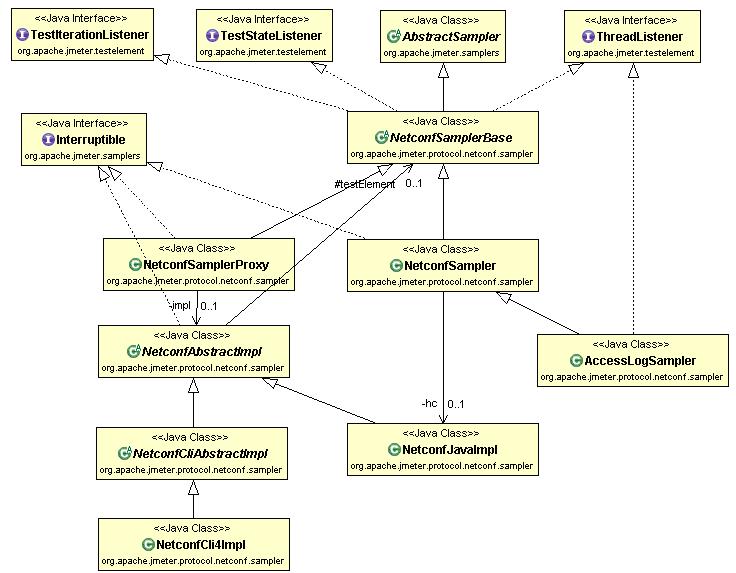 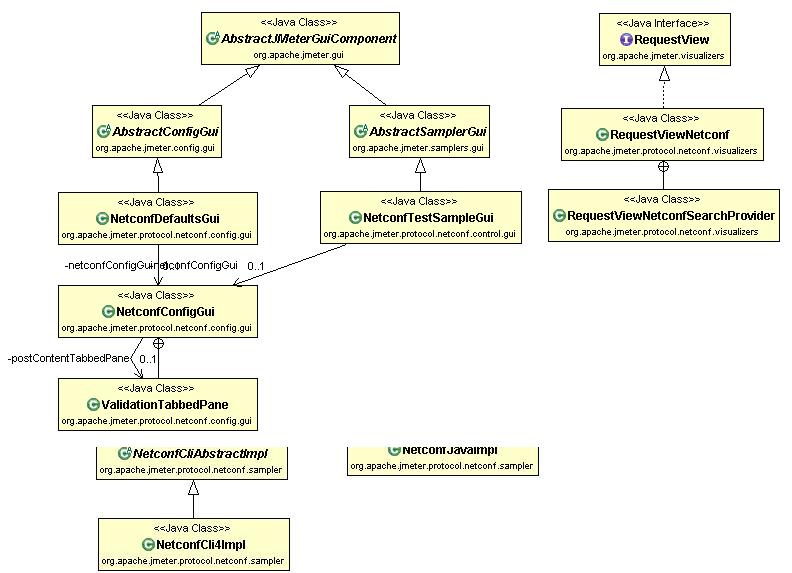 With Netconf plug-in implemented above, we can use JMeter to customize the network service automation process without any compiled code. The network connection for the process is shown as follows, that is, through the JMeter with Netconf plug-in deployed on NMS(Network Management System) host, the network service configuration data can be deployed to the switches, routers or firewalls which support Netconf. 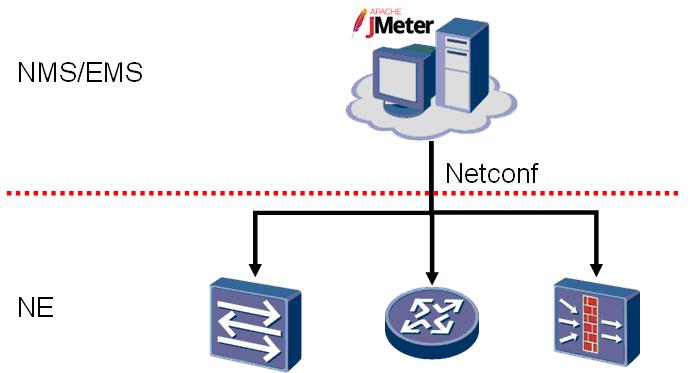 Here, we take the network device IP configuration scenario as an example to show how the network service automation process is running. Due to different Netconf/YANG model for different type of device provided by different network device vendor, there are usually some differences between the Netconf request messages from them. In the following example, we use IETF standard Netconf/YANG models to show the automation process and saved the process as a JMX file.

The JMeter framework provides parameter configuration GUI and the parameters can be invoked in the process. In the example, the network device login and the specified port information have been provided. 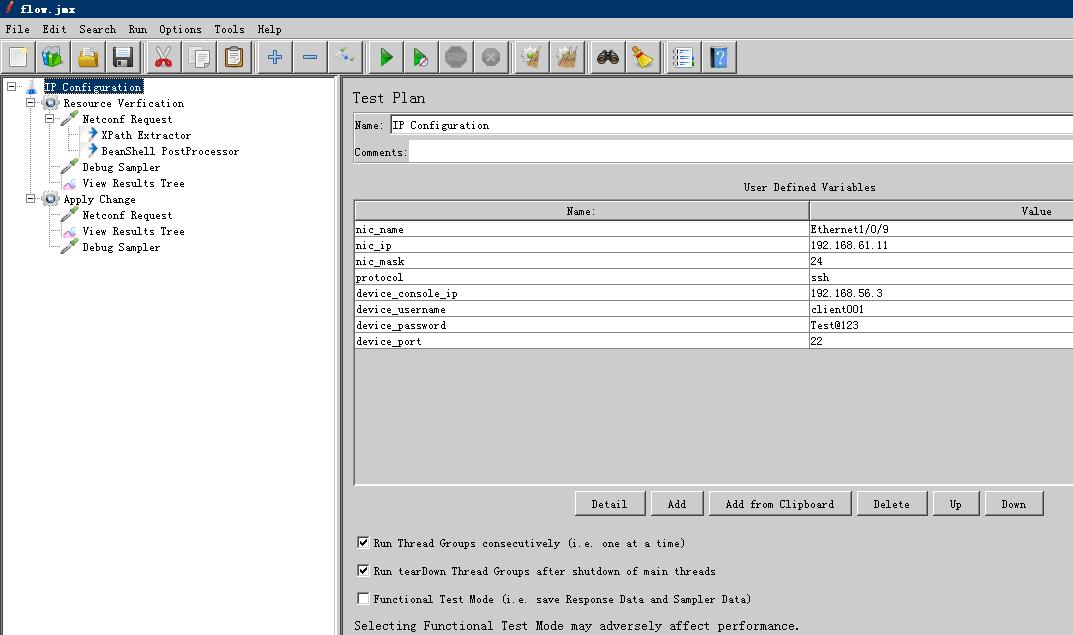 With the information provided in step 1, the automation process will connect to the network device, query all ports resource information in it with get-config message through Netconf plug-in and verify the port specified exists or not in the response message. 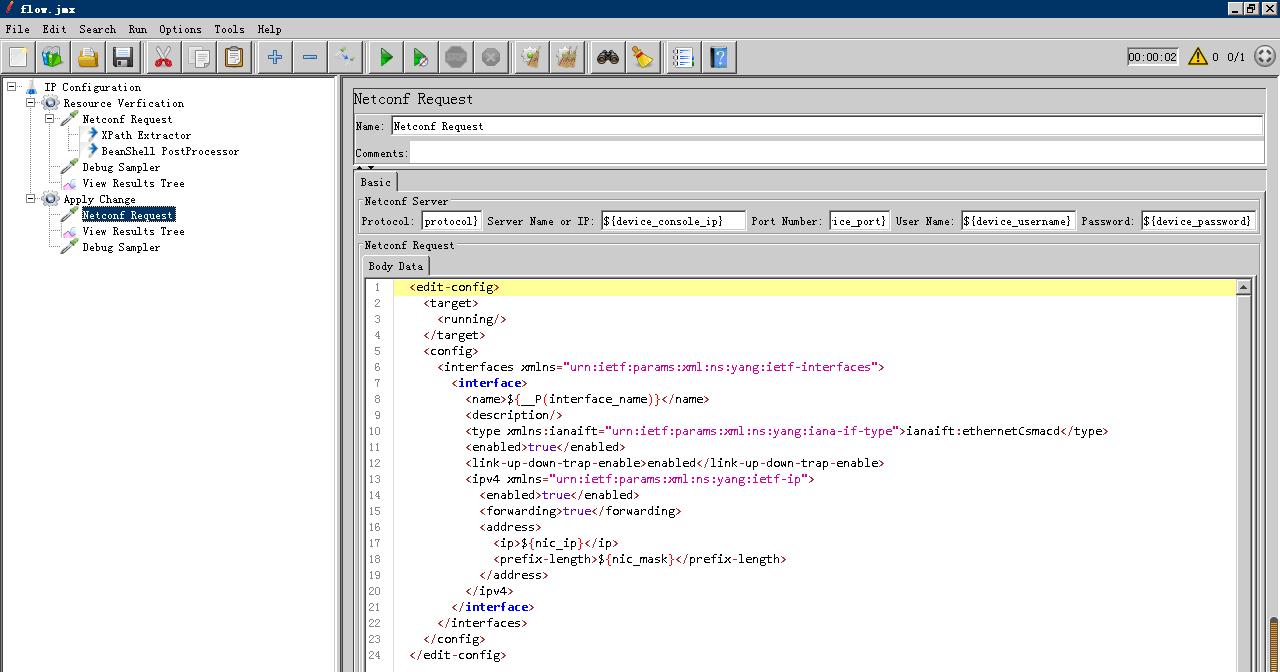 If step 2 is passed, the process will assemble the edit-config message according to the device information input in step 1 and the validated device port information in step 2, and send to the network device through the Netconf plug-in.