JDK 16 early access has a build available including Project Loom, which is all about virtual, light-weight threads (also called Fibers) that can be created in large quantities, without worrying about exhausting system resources.

Project Loom is also the reason why I did not use a reactive framework for JobRunr, as it will change the way we will write concurrent programs. It's Virtual Threads are supposed to be a drop-in replacement for the existing threading framework and I tried it out with JobRunr today.

This also means that JobRunr, as of v0.9.16 (to be released soon), will support project Loom out-of-the-box while still also supporting every JVM since Java 8!

Implementing support for Project Loom was easier than I thought using a ServiceLoader. I extracted a simple interface called JobRunrExecutor from the existing ScheduledThreadPool.

I then created another implementation of the interface using JDK 16 making use of Project Loom which does nothing more than delegating to a Virtual Thread:

Using a standard ServiceLoader, I was able to inject the VirtualThreadJobRunrExecutor thus adding support for Virtual Threads!

With all this in place, it was time to test and see if performance is better.

As I want to make sure performance is as good as it gets, I have some end-to-end tests which I run regularly, which can be found in the following GitHub repository: https://github.com/jobrunr/example-salary-slip. In this project, paychecks are generated for 2000 employees using a Word template and then transformed to PDF.

To compare Java 11, Java 16 and Java 16 with Project Loom, I ran this project again and hooked up JVisualVM. To give the JVM some time to warm up, I ran each test 3 times.

Comparing performances is not fair as JobRunr only checks for new jobs every 15 seconds and thus comparing these numbers just depends on the fact when I enqueued the jobs. Just to be complete, you can find the numbers below:

All numbers are in seconds.

What we can compare is the results from JVisualVM. And boy, are these worthwhile! 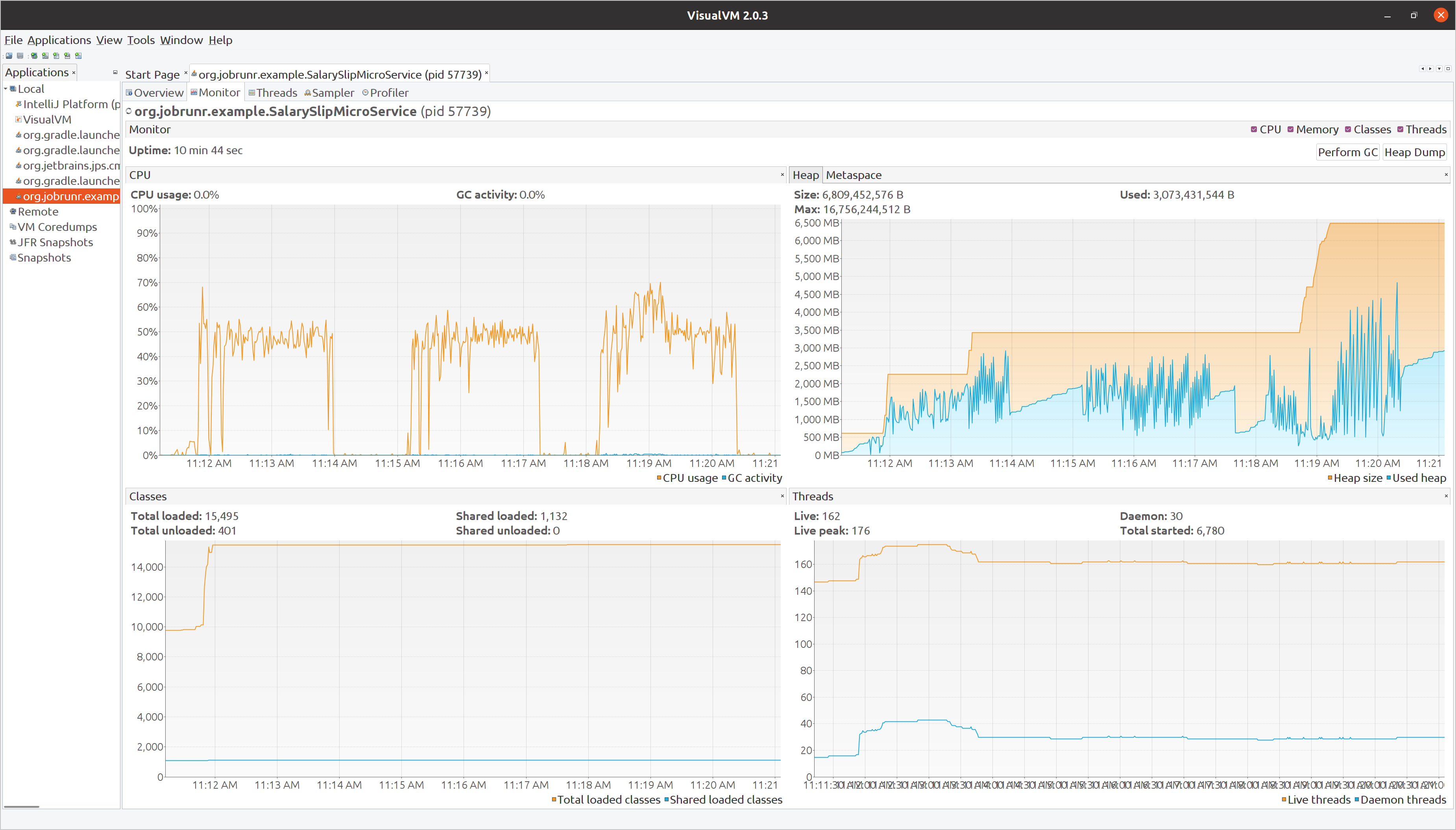 The biggest difference is memory usage:

So, using JDK 16 with these light-weight virtual threads resulted in:

While I initially thought that Project Loom would increase performance a lot, I currently see major improvements in memory usage. I also was surprised as how easy it was to support Project Loom thanks to the use of the ServiceLoader.

Do note that JDK 16 is an early-access build and it's not even sure if Project Loom will be part of JDK 16.

The source code for this article is off-course available on GitHub.

I hope you enjoyed this post and you can see the benefits of JobRunr and Project Loom with it's Virtual Threads.

To learn more, check out these guides: