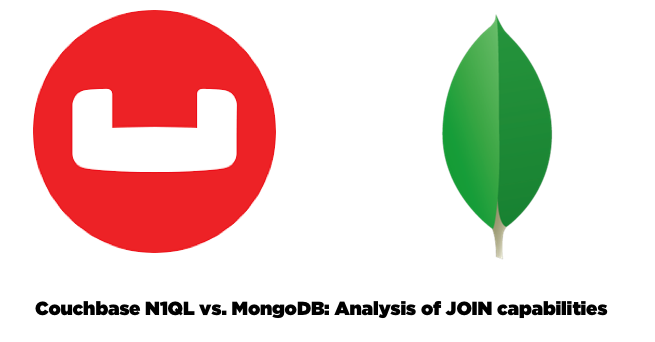 As NoSQL databases evolved, each added higher level APIs or languages to help programmers to complex things easily. SQL, having done that for relational data, showed the way. In SQL, developers say"what" needs to be done and the database engine figures out the "how." "How" is the efficient procedure/algorithm to execute the statement. Select, join, and project are the basic operations SQL processing. Even in NoSQL systems, when you model data without much normalization, you still need to join a collection of objects. Customers with orders, orders with inventory, inventory with suppliers, suppliers with credits, and so forth. Hence, Couchbase N1QL has supported join operations since its first release. Following that, MongoDB, in version 3.2, added $lookup operator to the aggregation framework to perform the join operations.

Without an expressive and high-performance query feature, application developers have to do it within the application or export the data to a system that does it. Both expensive propositions.

In this article, do a comparative study of joins between MongoDB and Couchbase. Joins are unsupported in Cassandra CQL, DynamoDB natively. Applications have to do it themselves or have to use other layers like Spark or Amazon EMR do it separately. So, we won’t cover them in this article.

Couchbase introduced INNER and LEFT OUTER joins starting with Couchbase 4.0 (2015). This supported joins of in a child-to-parent relationship. Children documents (e.g. Orders) can be joined with parent documents (e.g. customer). In 4.5 (2016), Couchbase introduced index joins to query from parent to child joins. In both cases, there was an implied attribute-value to document-key equality predicate, specified by the ON KEY clause.

Joins are supported via the $lookup operator within the aggregation framework.

Following is the excerpt from the MongoDB documentation.

Eliot Horowitz, MongoDB CTO, said: “MongoDB aggregation is similar to Unix pipeline. The output of one stage goes into another...[it’s] very procedural. Lets you think about in a very procedural way.”

Interested in learning more on JOINs? Read this article by Lukas Eder.

Couchbase N1QL: Supports INNER JOIN, LEFT OUTER JOIN and limited RIGHT OUTER JOIN. The query language, like SQL, is declarative. Developers write, tools generate the query to the N1QL syntax. The engine figures out the plan and executes the query.

MongoDB: Supports LEFT OUTER JOIN for scalar values only. The design of the joins into the MongoDB query language is done help write the query and process data in a procedural way.

We use the simple travel-sample model and data. Here are the details of the model data.

We simply exported the data from Couchbase and imported to a mongo database called travel-sample. In MongoDB, the 5 different types of the document (landmark, route, airline, airport, hotel) are stored in 5 collections with respective names.

Example 1: LEFT OUTER JOIN with ON clause on scalar values.

This is a fairly simple left outer join query joining two collections and then simply counting the total number of documents produced. Notice, unlike N1QL (and SQL), in MongoDB, you’d still have to group the resultset to get the count, even if you have a single group.

As expected, the MongoDB join query is procedural and you’ve to understand the execution plan and write code for each stage.

Example 3: Starting from San Francisco, find all the destination airports (those have routes from SFO).

Example 4: Find all the hotels and landmarks in Yosemite. Hotels should have at least 5 likes.

The converted query in MongoDB

Example 5: Find all the hotels and landmarks in Yosemite. Hotels should have at least 5 likes.

This is just like Example 4, but do it faster!

The default join method in Couchbase N1QL is nested loop join. This works fine when you have a smaller number of documents involved on each side of the join. When you have a larger data set, typically in reporting queries, nested loop join slows down. Couchbase N1QL has hash joins and this speeds up joins significantly. When each side of join has thousands of documents to millions of documents, the speed increase can be 2x to 20x or more. See the detailed Couchbase blog on ANSI Joins for more information.

From the documentation and explain plan, it’s unclear what join method MongoDB uses. Some of the blogs indicate that they’ve used a nested loop join to implement the $lookup operator.

How about performance? Good question. That’s for a future article!

And now, a quote: