for many web-based client-server applications, the old http request-response model has its limitations. information has to be transmitted from the server to the client in between requests, rather than upon request only.

a number of "hacks" have been used in the past to circumvent this problem, for example, long polling and comet. however, the need for a standards-based, bidirectional and full-duplex channel between clients and a server has only increased.

the websocket protocol leverages the http upgrade technology to upgrade an http connection to a websocket. once it is upgraded, the connection is capable of sending messages (data frames) in both directions, independent of each other (full duplex). no headers or cookies are required, which considerably lowers the required bandwidth. typically, websockets are used to periodically send small messages (for example, a few bytes). additional headers would often make the overhead larger than the payload.

jsr 356, java api for websocket, specifies the api that java developers can use when they want to integrate websockets into their applications—both on the server side as well as on the java client side. every implementation of the websocket protocol that claims to be compliant with jsr 356 must implement this api. as a consequence, developers can write their websocket-based applications independent of the underlying websocket implementation. this is a huge benefit, because it prevents a vendor-lock and allows for more choices and freedom of libraries and application servers.

jsr 356 is a part of the upcoming java ee 7 standard; hence, all java ee 7–compliant application servers will have an implementation of the websocket protocol that adheres to the jsr 356 standard. once they are established, websocket client and server peers are symmetrical. the difference between a client api and a server api is, therefore, minimal. jsr 356 defines a java client api as well, which is a subset of the full api required in java ee 7.

a client-server application leveraging websockets typically contains a server component and one or more client components, as shown in figure 1: 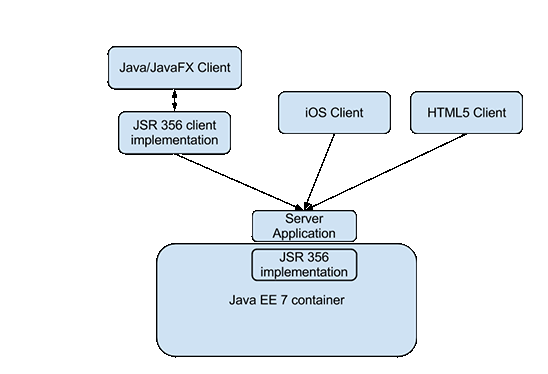 in this example, the server application is written in java, and the websocket protocol details are handled by the jsr 356 implementation contained in the java ee 7 container.

a javafx client can rely on any jsr 356–compliant client implementation for handling the websocket-specific protocol issues. other clients (for example, an ios client and an html5 client) can use other (non-java) implementations that are compliant with rfc 6455 in order to communicate with the server application.

the expert group that defined jsr 356 wanted to support patterns and techniques that are common to java ee developers. as a consequence, jsr 356 leverages annotations and injection.

the typical lifecycle event of a websocket interaction goes as follows:

most of the websocket lifecycle events can be mapped to java methods, both in the annotation-driven and interface-driven approaches.

an endpoint that is accepting incoming websocket requests can be a pojo annotated with the @serverendpoint annotation. this annotation tells the container that the given class should be considered to be a websocket endpoint. the required value element specifies the path of the websocket endpoint.

initiating a websocket connection in java leveraging the annotation-driven pojo approach can be done as follows:

hereafter, classes annotated with @serverendpoint or @clientendpoint will be called annotated endpoints.

once a websocket connection has been established, a session is created and the method annotated with @onopen on the annotated endpoint will be called. this method can contain a number of parameters:

the following method implementation will print the identifier of the session when a websocket is "opened":

a session instance is valid as long as the websocket is not closed. the session class contains a number of interesting methods that allow developers to obtain more information about the connection. also, the session contains a hook to application-specific data, by means of the getuserproperties() method returning a map<string, object> . this allows developers to populate session instances with session- and application-specific information that should be shared among method invocations.

when a text message has been sent by the other peer, the content of the message will be printed by the following code snippet:

another way of sending messages over a websocket connection is shown below:


in this approach, we start from the session object, which can be obtained from the lifecycle callback methods (for example, the method annotated with @onopen ). the getbasicremote() method on the session instance returns a representation of the other part of the websocket, the remoteendpoint . that remoteendpoint instance can be used for sending text or other types of messages, as described below.

when the websocket connection is closing, the method annotated with @onclose is called. this method can take the following parameters:

the following code snippet will print the reason why a websocket is closing:

to be complete, there is one more lifecycle annotation: in case an error is received, the method annotated with @onerror will be called.

the annotation-driven approach allows us to annotate a java class and methods with lifecycle annotations. using the interface-driven approach, a developer extends javax.websocket.endpoint and overrides the onopen , onclose , and onerror methods:

in order to intercept messages, a javax.websocket.messagehandler needs to be registered in the onopen implementation:

the following code snippet listens to incoming text messages and sends the uppercase version of the text message back to the other peer:

the java api for websocket is very powerful, because it allows any java object to be sent or received as a websocket message.

basically, there are three different types of messages:

when using the interface-driven model, each session can register at most one messagehandler for each of these three different types of messages.

the javadoc for the @onmessage annotation clearly specifies the allowed message parameters based on the message type (the following is quoted from the javadoc):

an encoder is defined as an implementation of the javax.websocket.encoder interface, and a decoder is an implementation of the javax.websocket.decoder interface. somehow, the endpoint instances need to know what the possible encoders and decoders are. using the annotation-driven approach, a list of encoders and decoders is passed via the encoder and decoder elements in the @clientendpoint and @serverendpoint annotations.

the code in listing 1 shows how to register a messageencoder class that defines the conversion of an instance of myjavaobject to a text message. a messagedecoder class is registered for the opposite conversion.

the encoder interface has a number of subinterfaces:

the java api for websocket provides java developers with a standard api to integrate with the ietf websocket standard. by doing so, web clients or native clients leveraging any websocket implementation can easily communicate with a java back end.

the java api is highly configurable and flexible, and it allows java developers to use their preferred patterns.

johan vos started working with java in 1995. he is a cofounder of lodgon, where he is working on java-based solutions for social networking software. an enthusiast of both embedded and enterprise development, vos focuses on end-to-end java using javafx and java ee. learn more at his blog or follow him at http://twitter.com/johanvos .