long term success hinges on adaptation and reinvention, especially in our dynamic world where nothing lasts forever. especially with business, we routinely see the rise and fall of products and companies.

the long game mandates change, and the database ecosystem is no different. today, megatrends of social, mobile, cloud, big data, analytics, iot, and machine learning place us at a generational intersection.

data drives our digital world and the systems that shepherd it underpin much of our technology infrastructure. but data systems are morphing rapidly, and companies reliant on data infrastructure must keep pace with change. in other words, winning companies will need to jump the database s-curve.

in 2011, paul nunes and tim breene of the accenture institute for high performance published jumping the s-curve: how to beat the growth cycle, get on top, and stay there .

in the world of innovation, an s-curve explains the common evolution of a successful new technology or product. at first, early adopters provide the momentum behind uptake. a steep ascent follows, as the masses swiftly catch up. finally, the curve levels off sharply, as the adoption approaches saturation.

the book details a common dilemma that too many businesses only manage to a single s-curve of revenue growth,

in which a business starts out slowly, grows rapidly until it approaches market saturation, and then levels off.

they share the contrast of stand-out, high-performance businesses that manage growth across multiple s-curves. these companies continually find ways to invent new products and services that drive long-term revenue and efficiency. 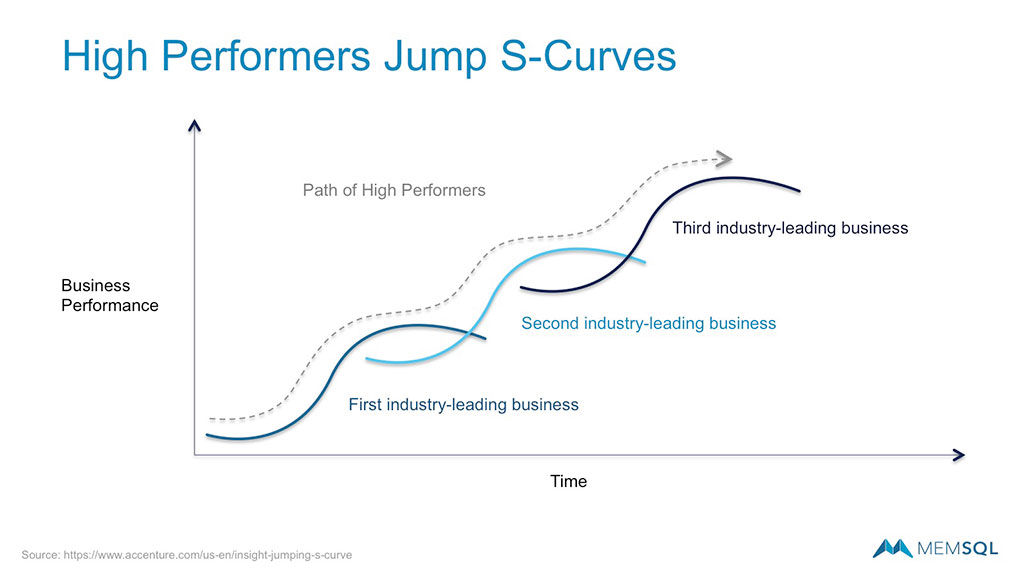 applying the s-curve to data infrastructure

the s-curve applies to new technologies and products, and for the rest of this piece, we apply the concept to the evolving database and data management world.

architects recognized the simplicity of single server systems, and the advantages provided to build robust architectures for mission critical applications.

for most of the last 30 to 40 years, since the development of sql in the 1970s, this model served the industry well.

however, when data volumes and performance requirements increased dramatically, as we see with digital megatrends, the limits of a single server system become readily apparent.

starting around 2007, distributed datastores like hadoop began to take hold. distributed architectures use clusters of low-cost servers in concert to achieve scale and economic efficiencies not possible with monolithic systems. in the past ten years, a range of distributed systems have emerged to power a new s-curve of business progress.

examples of prominent technologies in the distributed era include, but are certainly not limited to

more specifically in the datastore arena are

together these architectural and economic advantages mark the rationale for jumping the database s-curve.

the future of ai augmented datastores

ai will appear in many ways, including

new pattern recognition : discerning new trends in the data without the user having to specify a query

of course, ai will likely expand data management performance far beyond these examples too. in fact, in a recent news release , gartner predicts,

more than 40 percent of data science tasks will be automated by 2020, resulting in increased productivity and broader usage of data and analytics by citizen data scientists

the industry currently sits at the intersection of the monolithic and the distributed datastore eras, and jumping s-curves is no easy feat. by definition, a new s-curve is significantly different from the prior, where many technologies, skill sets, and mindsets likely do not transfer forward.

perhaps nunes is suggesting successful companies have the talent and mindset needed to jump, but need to be creative to discover it.

adopting new products and technologies mandates change, which is rarely easy and often challenging at first. but if there is one universal truth about business, staying in place rarely leads to long-term success. companies that move forward, however, have a chance to jump the s-curve and lead another wave of growth.