i have been playing with kafka on and off lately. it is an excellent addition to the ecosystem of big data tools where scale with reliability is imperative. i find it intuitive and conceptually simple (according to the kiss principle) and the focus is squarely on reliability at scale. unlike the traditional messaging systems that attempt to do many things, kafka offloads some tasks to the users, where they rightly belong anyway — like consuming messages. kafka employs the dumb-broker-smart-consumer paradigm, whereas the traditional systems do the opposite. in kafka, the users get full control over the consumption of messages (like re-processing older messages if they want to, for example) and kafka gets to focus on message throughput, persistence, parallelism, etc. — it is a win-win. more importantly, it enables kafka to natively enable complex stream processing capabilities, so kafka now describes itself as a "distributed streaming platform" rather than a messaging pub-sub system.

the purpose of this post is illustration . we pick a simple, made-up (but intuitive) set of data streams generated by different sensors. each stream of data on its own is inconclusive in assessing the overall health of the process. they need to be looked at in the aggregate, i.e. in conjunction with data from the other sensors in order to compute a health metric for the process. and we will use kafka streams to do just that.

stream processing allows for catching the data in the act, so to speak. this is as opposed to waiting to ingest that data on a back-end platform and then running health queries to check if all went well. if we do find in that case that it did not go well — too bad, it already happened. the best one can do is learn from it and update the processes so the situation doesn't repeat. when this is unacceptable, we need the means to analyze the data as it flows so we can either take a remedial action or at least alert — in real-time. having this ability to generate preliminary alerts based on incoming data "as it happens" can be useful before a deep dive later on as needed. kafka, as the data bus, has been coupled with tools such as spark for stream processing. but this adds extra layers and clusters to the platform. if one is not already heavily invested in these other tools for stream processing, kafka streams would be a natural choice, as the data is already being fielded by kafka, anyway. i do see people converting their apps to use kafka streams on that simple account.

a data stream is an unbounded, ever-increasing set of events , and as such, these data streams are routinely obtained in daily life. in many cases, there is a need for real-time analysis across multiple streams of data for critical decision-making. for example: 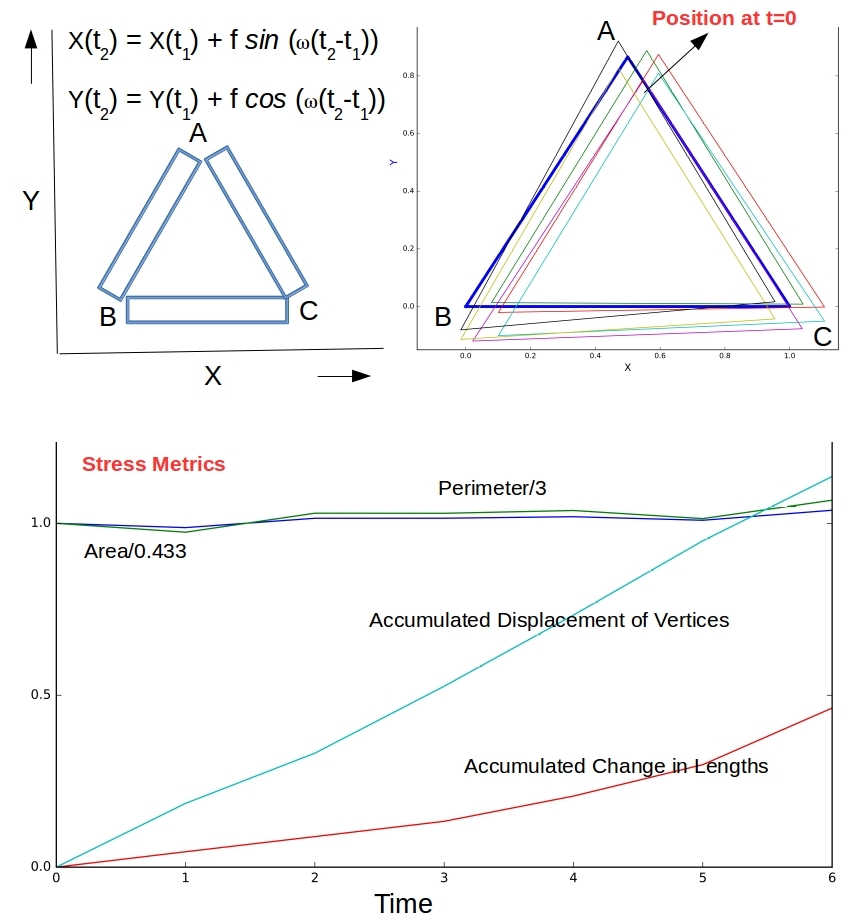 figure 1: a simulated view of deformation as a, b, and c experience somewhat periodic movements. f is a random amplitude designed to create noise around the base signal. cumulative metrics could be better indicators of stress than snapshot metrics.

figure 1 shows three metal plates riveted at their ends forming an equilateral triangle with unit sides (area 0.433 and perimeter 3.0) on a plane. the sensors at a, b, and c continuously throw off positional data — the x and y coordinates in a common reference frame. a pseudo-periodic movement with randomized amplitude f is simulated for the three vertices. movement at the junctions causes stresses in the plates and in the supporting structure. overall stress metrics i - 1 with predictive ability can be computed and used for alerting. with the index i and referring to successive measurements, we have:

converting the above scenario to a topology of data streams & processors is straightforward as shown in figure 2. 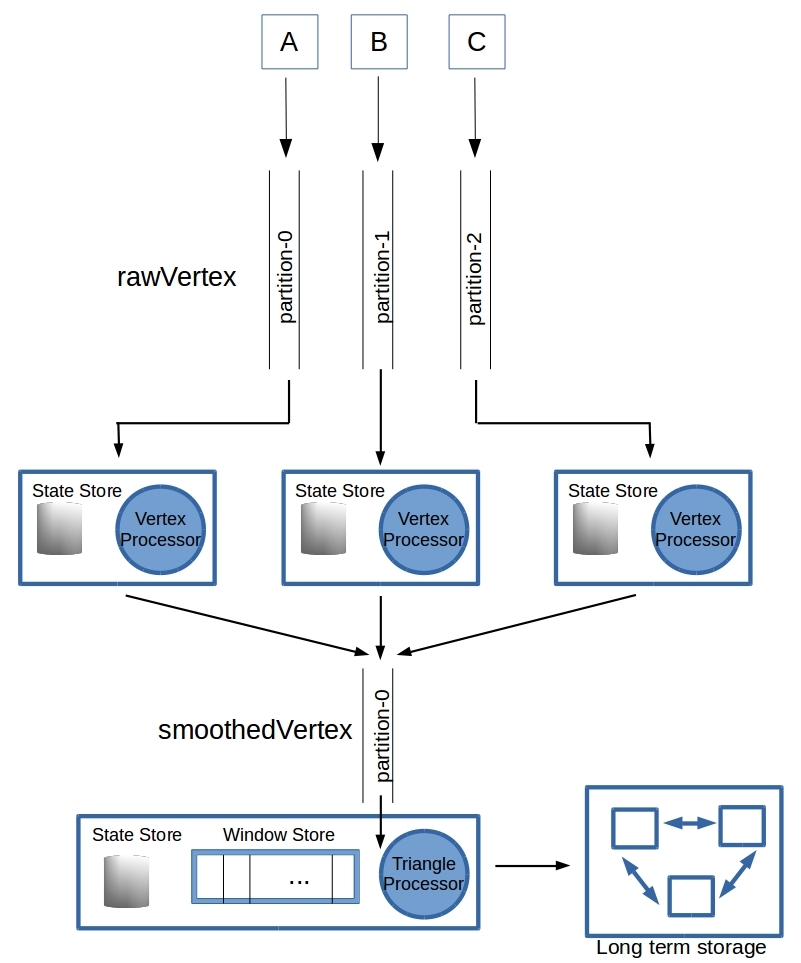 figure 2: as many source topic partitions as the number of sensors/vertices. each processor uses a local store to recover state in case of failure. the triangle processor uses a time-binned event store to detect simultaneity.

the core elements of the topology are as follows. 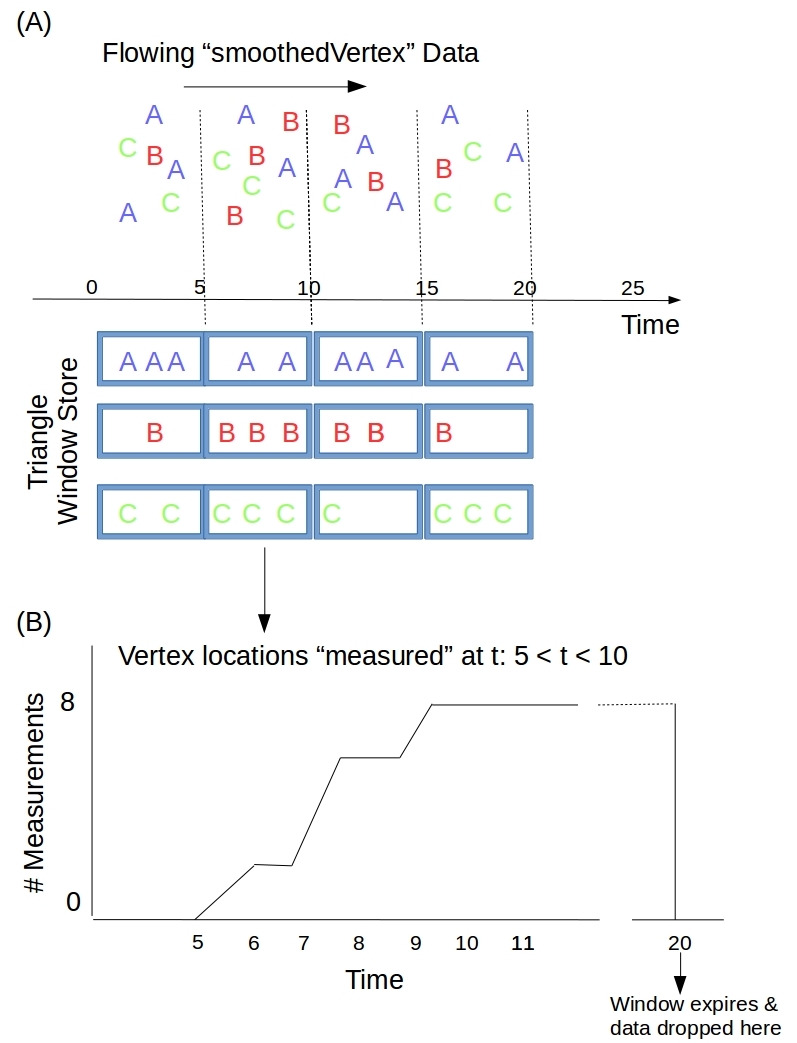 figure 3: the window state store. (a) flowing data is binned into time windows. the measurement time of a data point determines which bin it ends up in. this means that the points in a bin can be used to approximately identify the triangle at a point in time (perhaps the midpoint of the bin). (b) a window starts out empty and accumulates data as measurements flow in from the smoothedvertex topic. it reaches a maximum and stays there until the window is dropped after the retention time is reached. the retention time is chosen so that we can detect the plateauing of the data count in the bin and also have enough time to compute stress metrics for the triangle.

the disk is the life-blood of kafka. reading from and writing to disk is its bread and butter. data is written to disk and pulled from disk as it moves on down from the source topics via intermediate topics to its long-term storage. so, the serialization of our raw and smoothed vertex objects as they are written to disk and their deserialization as they are read back into the code is important. thankfully, we have the avro schemas to define the data structures in and kafka (via confluent ), providing built-in support for the serialization and deserialization of avro objects.

the raw measurement from the sensor at a vertex is the value of the topic rawvertex. the key for the topic is the name of the sensor (a or b or c). x and y are the instantaneous values for the vertex location.

the vertex processor smooths the incoming measurements from the rawvertex topic over short periods of time. it saves the latest one to its local store and also pushes it onto the smoothedvertex topic. x and y in these records are the time-averaged coordinates of this vertex/sensor over the period timestart - timeend. the displacement distance of the vertex due to each successive measurement is accumulated in cumulativedisplacementforthissensor . if the vertex processor were to crash and be restarted, it has enough information in its local store to continue on from where it left off.

the triangle processor is where the rubber meets the road. the evolution of the triangle and the stress metrics are computed and saved to a local store and purged to long-term storage periodically. the model for the triangle will have the usual suspects like the vertex locations, sides, area, etc. and the cumulative displacement of vertices over the entire time. on what basis to alert on is not the focus here: we can make it up.

the core pieces of the problem and the solution approach have been laid out here. what is left is the implementation and a walk-thru of code snippets as needed to make the points. as this post is already getting a bit long, we will take it up in the next installment.

Published at DZone with permission of Ashok Chilakapati. See the original article here.