i was on vacation with my son at yosemite over spring break a few weekends ago. the early part of the trip was washed out due to rain, as they closed the park and we were cooped up in the lodge waiting it out. but we had a patio view of the merced river and the torrent of water gushing through. loads of time to break out the laptop and write up the long overdue second installment to the use of kafka streams. so, here we go.

in the previous post , we laid out a monitoring problem and a solution approach with kafka streams. here, we'll go over the design of the experiment and simulate it to convince ourselves that it all works as expected. we start with the overarching timing belt, the pace, and the resiliency concerns that should be accounted for in the design. we want to have an intuitive feel for the rhythm of the operation and know what to expect before we start generating a lot of data.

the objective of this post is to go over the factors we need to consider in the design, understand the capacity of our system, characterize it in terms of operational delays inherent in the system, and plan for failures and recovery. we'll run a few simulations as we go along to confirm that the results are as per the design.

the apparatus for the experiment to twist the triangle is the laptop. the three producer processes get started at the same time and write the rawvertex data to disk. the stream process pulls the rawvertex data, smooths them over a short contiguous period, writes to various state stores, computes stress metrics, and saves to long-term storage. that is the big picture.

stream operations live and die by time. so first, the operational definition of time in the model is critical as the monitors and/or the stream processors can go down and restart, getting stuck in expensive calculations, or the network slows down the delivery of messages, etc. — even as the wall-clock chugs along uninterrupted. the good folks at kafka have realized this and allowed for the concept of stream time to be defined as per the needs of the use case.

in our case, this would be the time a measurement is made, or a close enough instance in time when all three vertices have a measurement — so, we can approximate a snapshot of the triangle (it certainly will not do to define a continuously deforming triangle with the positions of the vertices measured at widely different times). this stream time will not advance if no new measurements emanate from the monitors — perfect!

second, we need to have an intuitive understanding of the operational rhythm, so a quick glance at the various metrics in a production scenario at, say, 4 am can tell us what may be amiss. this is the clip of the operation — like the number of raw/smoothed measurements and the number of triangle metrics per unit time that we should be seeing on a production dashboard. this pace of the operation is determined by the rate of rawvertex production at the monitors, the smoothing interval at the vertexprocessor before it produces a smoothedvertex, and the window size (and its retention time) in the triangleprocessor. a few obvious considerations would be:

third, we have to take into account the limitations of the apparatus (the laptop, as is the case here) at hand, such as latency and contrast between the steady and unsteady operational states.

in a steady-state operation, the rate at which the raw vertices are delivered stays about the same. but when the stream processor comes back up after a failure, it can get overloaded with all the backlogged measurements. the vertexprocessor gets too busy to spare time to forward the smoothed measurements to the next stage. the punctuate/forward operation is best effort , meaning that if the processor is otherwise busy, the punctuate operation may be delayed or clubbed with the next punctuate op. if the processor has been down for an extended period of time, one can see large delays in producing the first smoothed vertices after a restart.

with the above discussion in mind, we proceed with the simulation in steady state.

running the simulation for over 12 hours and capturing the beat for verification on elasticsearch and kibana, we see that our design holds up with respect to the rate of production of messages and metrics. 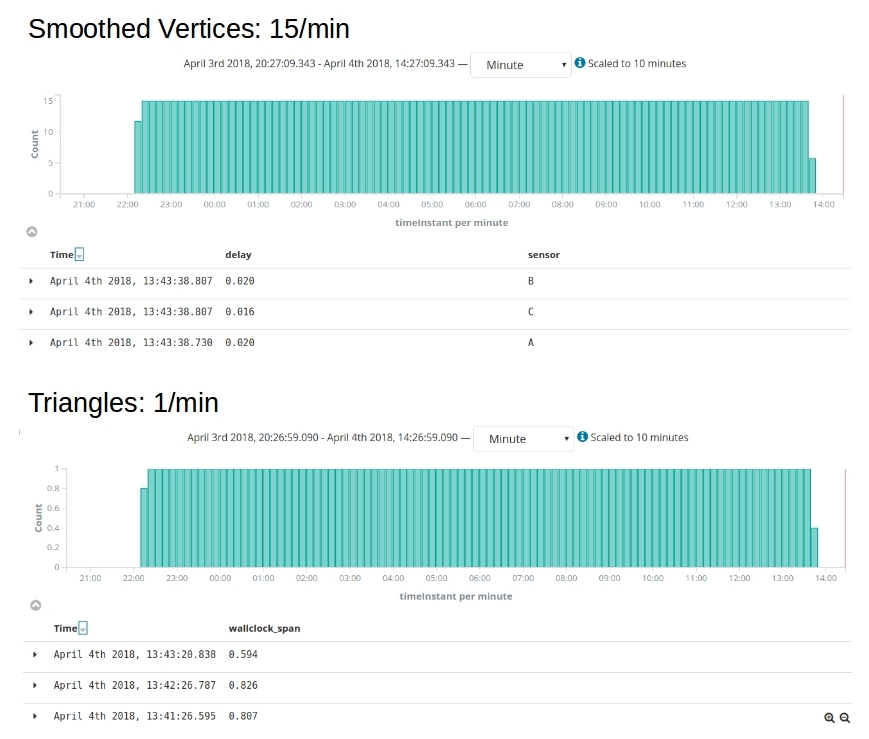 but what about latency? figure 2a below shows the latency of smoothed vertex messages in the stream process. 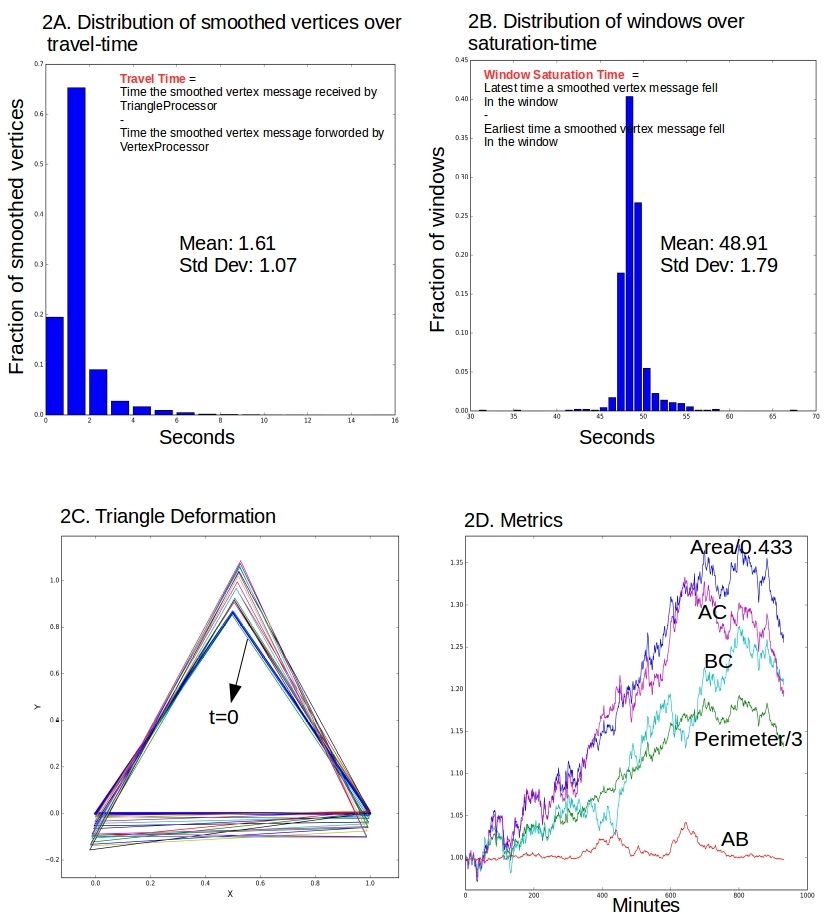 figure 2: steady-state operation. 2a shows the spread of the travel-time or stream-delay for a smoothed vertex messages to go from vertexprocessor to triangleprocessor. 2b shows the spread of the wall clock elapsed time between the earliest and latest arriving messages to a window (that is the saturation-time). 2c and 2d show the deforming triangle and some metrics with time.

a snapshot of the current offsets (obtained with kafka-utils ) during the steady-state shows that the processing is humming along nicely with just a few measurements on the disk waiting to be processed (see lines 7, 14, 20, and 26 below). this is the desired behavior and if anything, it shows that we may be able to increase the production rate and the laptop may still be able to stay current. but we will see in the next section that we do need this extra processing capacity to quickly lead us out of an unsteady state to steady state.

unsteady state results when the stream processor has a backlog of measurements to process. this causes some hiccups in the processing rhythm of the operation until it all stabilizes once more. we know for a fact that it will stabilize given enough time because of our conservative design parameters. our conclusion from our discussion on the steady state above is that we have excess capacity in stream processes that will eat into the backlog and eventually catch up to work on the currently produced measurements. 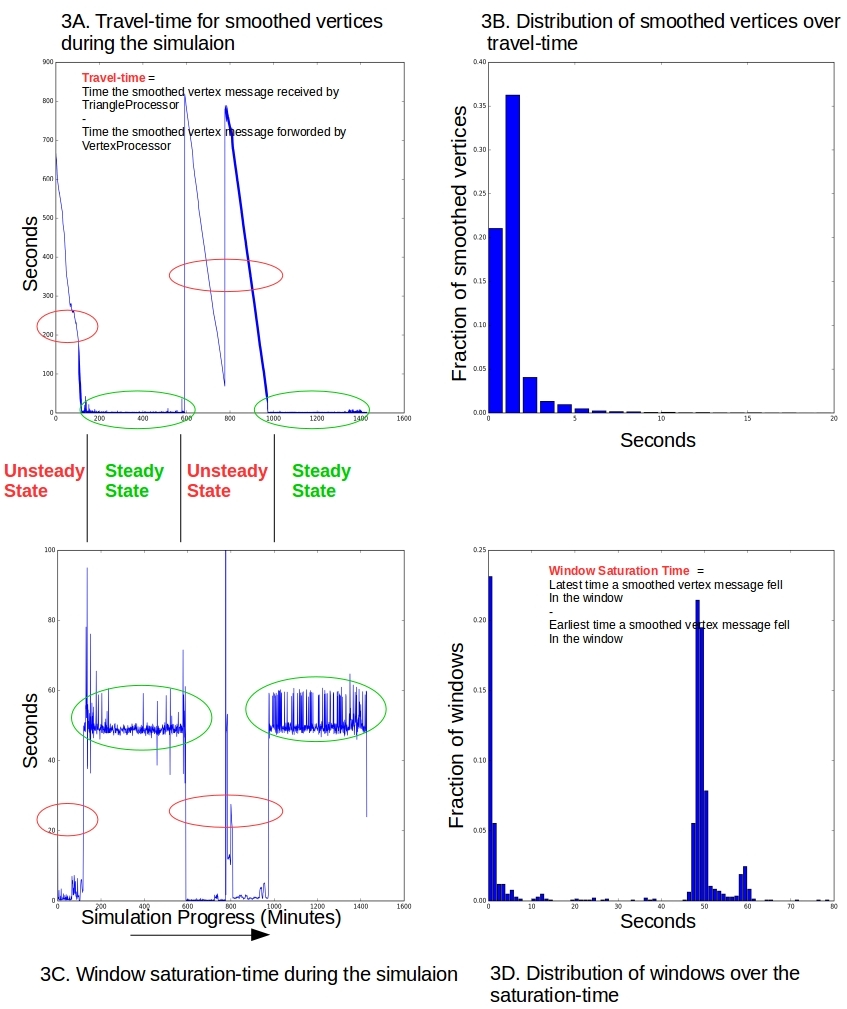 figure 3: unsteady and steady states. 3a : the apparent travel time for a smoothed vertex to make its way from the vertexprocessor to the triangleprocessor is larger during unsteady states. it approaches its steady-state value as the stream processor catches up with the backlogged messages. 3b : smaller fraction (57%) of overall smoothed vertices have less than two seconds of travel time compared to the steady-state-only operation (85% see figure 2a). 3c : windows saturate right away during unsteady-state as a burst of smoothed vertices unloads onto the triangleprocessor. as the stream processor catches up, the natural rhythm reasserts itself and the saturation time goes back up to a minute as in the steady state. 3d : window saturation time has a bimodal nature. the first mode corresponds to the steady-state value, and other near zero, reflecting the burst of smoothed vertices into the triangleprocessor.

the simulation results in figure 3 bear out many of the assertions we have been making about the steady and unsteady states.

we spent a good bit of time looking into the dynamics, and the ebb and flow of messages under different conditions. simulations such as these to establish the operational metrics for normal and failure conditions are essential to developing insight into the system. we will get to the actual code and mechanics under these simulations in the next installment.

Published at DZone with permission of Ashok Chilakapati. See the original article here.