as i have written , eclipse is celebrating 10 years of open source and community during the month of november.   there have been a number of milestones that have shaped the eclipse community but what have been the major accomplishments?  what has eclipse done to actually change the software industry?  here are what i see as some of the key accomplishments for eclipse.

1.  dominant java ide.  eclipse started out as being a really great java ide and continues today to be the market leader for java ides.  if you think back to the late 1990′s and early 2000′s the java ide market was a dog-fight between borland jbuilder, visual cafe, ibm visualage for java.   eclipse is now the clear leader and has approximately 65% market share in the java ide market.

4. integrating alm tools.  the mylyn project has grown into becoming the industry hub for integrating tools across the application lifecycle.   there are now over 70 different mylyn connectors that integrate different projects into the developer desktop.

5. modular runtimes.  equinox and the eclipsert projects demonstrate how modularity can work on a large scale.  everything at eclipse is based on equinox, since it is the osgi runtime.  however, equinox and the eclipsert top-level project has spawned an industry around eclipse rcp and server-side osgi.  the range of applications being built on rcp is impressive, including nasa mars rover, financial institutions, aircraft design, genome decoding, etc, etc.   on the server side, equinox is used by most enterprise java application servers and virgo is emerging as a new equinox based platform.

6. eclipse release train.  the eclipse release trains have demonstrated open source communities can be predictable and scale to large distributed teams.   this is incredibly important as large more conservative companies become involved in open source.  very few other organizations can claim a track record of predictability and scale that compares to the eclipse community.

7. eclipse ecosystem.  eclipse has become one of the two major development tools platform in the industry; ms visual studio being the other.   no matter what language you are using there is most likely an eclipse ide for you.  no matter what developer tool you are using, there is probably an eclipse plugin.   no other platform has been able to create such a diverse and large ecosystem.  it has actually made building and integrating developer tools a lot easier!

it has been an incredible 10 years and the community should be proud of what has been accomplished.   i wasn’t around at the start of eclipse but i have to believe the accomplishments of eclipse has been more than anyone expected.

i know this is not a complete list and i am sure i am missing some projects.  feel free to add suggestions in the comments. 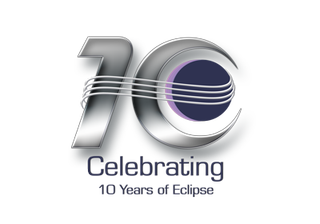