Auditing is an essential administrative input to understand the way a system is affected or being used. An audit trail is a log of the sequence of chronological events that occurred on a system. It helps administrators understand what event occurred, when did it take place and the trigger or the source of the event. It is also a compliance or legal requirement for many businesses and so an important part of IT systems. In this tutorial, we will look at how to do auditing in Kubernetes.

An Nginx pod (podname) was scheduled on a node(nodename) by a serviceaccount(serviceaccountname).The above statement helps an administrator or a developer understand the intent of the event (a pod being scheduled), the object in question (the nginx pod), the affecting system, (the node) and, the actor which was the serviceaccount.

An audit trail would be an effective input to help debug issues, fine-tune permissions, understand the way the system is being used and maybe write dynamic webhooks by looking at the audit logs to further tighten what can be done based on the knowledge of these usage patterns. Let us look at the way Kubernetes auditing is enabled and dive deeper at the actors in play here. Working on Kubernetes objects eventually means using the Kubernetes REST API, which is either via kubectl or via the Kubernetes client libraries. Hence, all the auditing is performed by the kubeapiserver by enabling options for auditing.

Since the kube-apiserver is the one which generates events, the memory consumption of the apiserver pod increases. This is directly proportional to the number of events generated.

Audit policies allow the definition of a set of rules which act on the above events and define the level of data that needs to be logged. These are called as audit levels. Below are the audit levels which can be used in an Audit Policy definition.

Here is a sample audit policy which we will use in the demonstration below.

The above Policy logs at the Request level for the secrets and configmap resources. Let us enable auditing on the kube-apiserver and write and deploy a sample audit policy. We will also create a couple of users and look at the audit events generated for those users. To start off clone the git repository

Allowing an external user to be authenticated to the Kubernetes cluster in order to create/update resources requires performing the following steps. Create a request specifying the details of the user which needs access to the cluster. The users/ folder already has the JSON files for 2 users, user:jai and user:veeru.

Generate the private key and the CSR based on the request JSON. Alternatively, you can also use cfssl print-defaults csr and edit the JSON request file.

With the csr and the private key generated, we now need to create a CertificateSigningRequest resource which is then approved/rejected by a cluster administrator to allow access to this user on the Kubernetes cluster. The request is a base64 encoded string of the generated CSR.

Apply the above spec using kubectl for both the users.

The new user certificate request needs to be approved, which essentially signs the user generated certificate by the cluster CA.

Note: These steps are performed by a cluster administrator.

Get the signed certificate for the user.

Create a kubeconfig entry to be used to interact with the cluster using kubectl.

These above steps will help prove the authenticity of the user. but the user still does not have any roles assigned to him. Create RBAC resources to provide access to the user either across namespaces or within a namespace. Provide the user(s) RBAC permissions as suitable on the cluster.

The user(s) should be able to list pods in the default namespaces now.

Refer sample-kube-apiserver.yaml The above steps would enable Kubernetes auditing and will log the audit events at a location /var/log/audit.log

Deploy Elasticsearch and Kibana to ingest and visualize the logs. Fluentd would be used as the log shipper which publishes the audit log to an elasticsearch endpoint.

This will deploy an Elasticsearch cluster with 3 data pods, 2 master pods and 2 client pods. The Elasticsearch client service is exposed via NodePort. The clusterIP of this service will be used in the fluentd-config.

The Kibana service is exposed over NodePort. Edit the Fluentd Configmap in the fluentd.yaml file. Provide the clusterIP of the Elasticsearch client service.

Note: Fluentd is used as a deployment in this case. It also has a Pod affinity where it gets scheduled to a node which runs the pod with label "component=kube-apiserver"

This will publish the audit log at /var/log/audit.log to the elasticsearch cluster, and these logs can be viewed by Kibana: 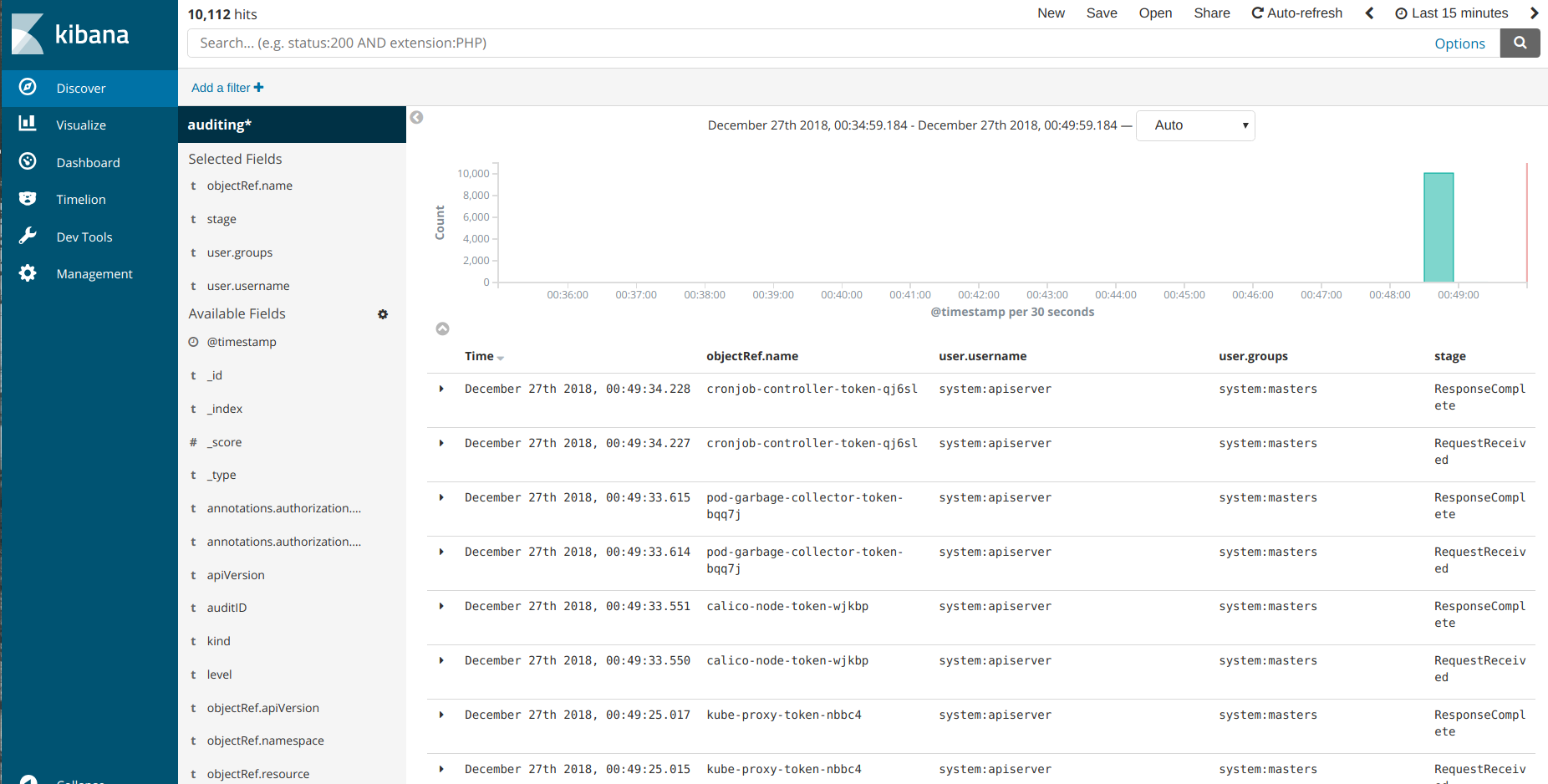 The Audit trail for the above commands should look something like this: 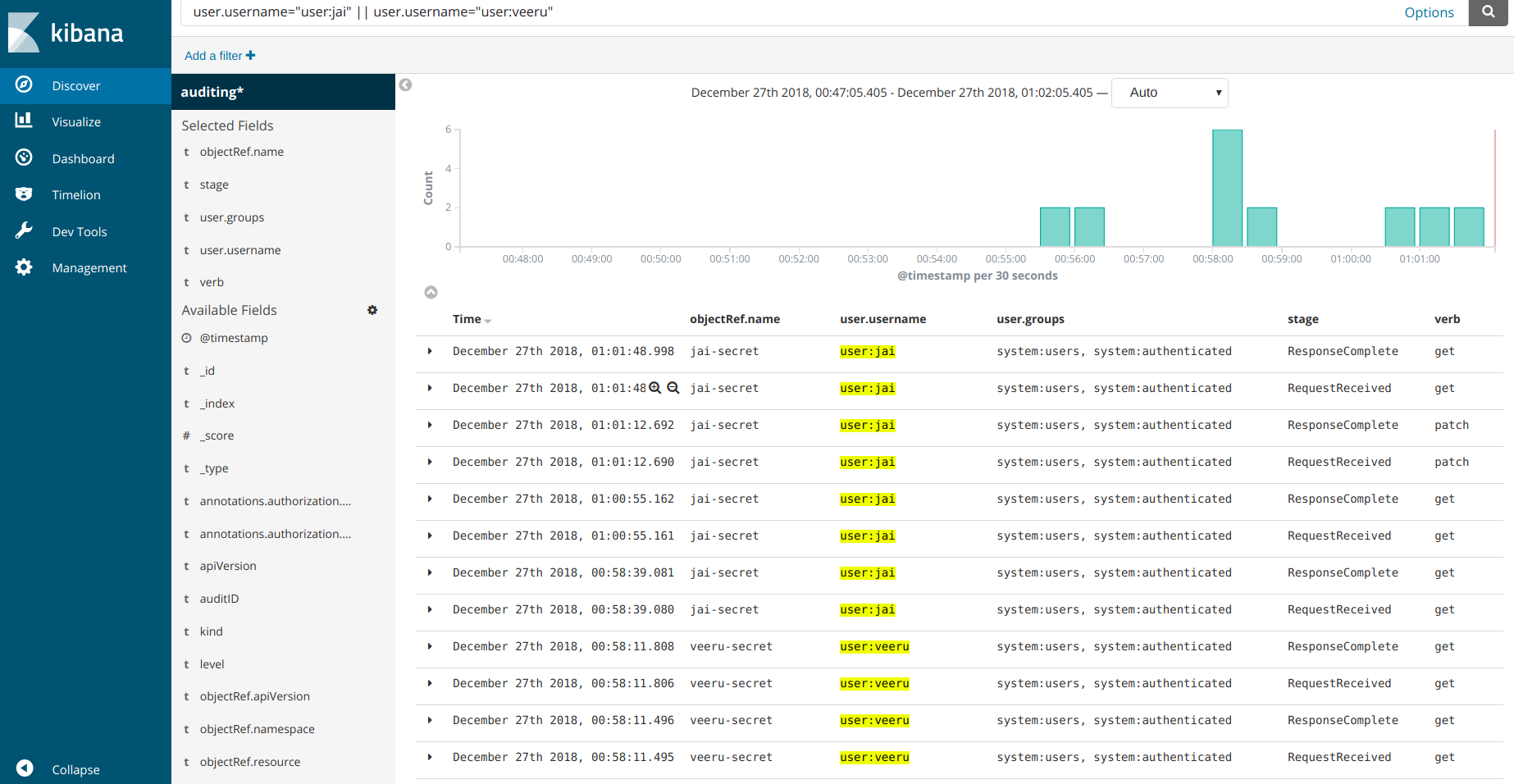 As a side note, webhook and dynamic backends (currently alpha in Kubernetes v 1.13) are also supported for audit trails.

This article is originally published on InfraCloud Blogs.

Published at DZone with permission of Hrishikesh Deodhar . See the original article here.