The CPU or RAM consumption of an application may not indicate the right metric for scaling always. For example, if you have a message queue consumer that can handle 500 messages per second without crashing. Once a single instance of this consumer is handling close to 500 messages per second, you may want to scale the application to two instances so that load is distributed across two instances. Measuring CPU or RAM is a fundamentally flawed approach for scaling such an application and you would have to look at a metric that relates more closely to the application's nature. The number of messages that an instance is processing at a given point in time is a better indicator of the actual load on that application. Similarly, there might be applications where other metrics make more sense and these can be defined using custom metrics in Kubernetes.

Originally the metrics were exposed to users through Heapster which queried the metrics from each of Kubelet. The Kubelet, in turn, talked to cAdvisor on localhost and retrieved the node level and pod level metrics. The metrics-server was introduced to replace Heapster and use the Kubernetes API to expose the metrics so that the metrics are available in the same manner in which Kubernetes API is available. The metrics server aims to provides only the core metrics such as memory and CPU of pods and nodes and for all other metrics, you need to build the full metrics pipeline. The mechanisms for building the pipeline and Kubernetes autoscaling remain the same, as we will see in detail in the next few sections.

One of the key pieces which enable exposing the metrics via the Kubernetes API layer is the aggregation layer. The aggregation layer allows installing additional APIs which are Kubernetes style into the cluster. This makes the API available like any Kubernetes resource API but the actual serving of the API can be done an external service which could be a pod deployed into the cluster itself (You need to enable the aggregation layer if not done already at cluster level as documented here). So how does this work under the hood? As a user, the user needs to provide the API provider (Let's say a pod running an API service) and then register the same using an APIService object.

Let's take an example of the core metrics pipeline and how the metrics server registers itself using the API aggregation layer. The APIService object looks like this:

After deploying the metrics server registering the API using APIService, we can see that the metrics API is available within Kubernetes API: 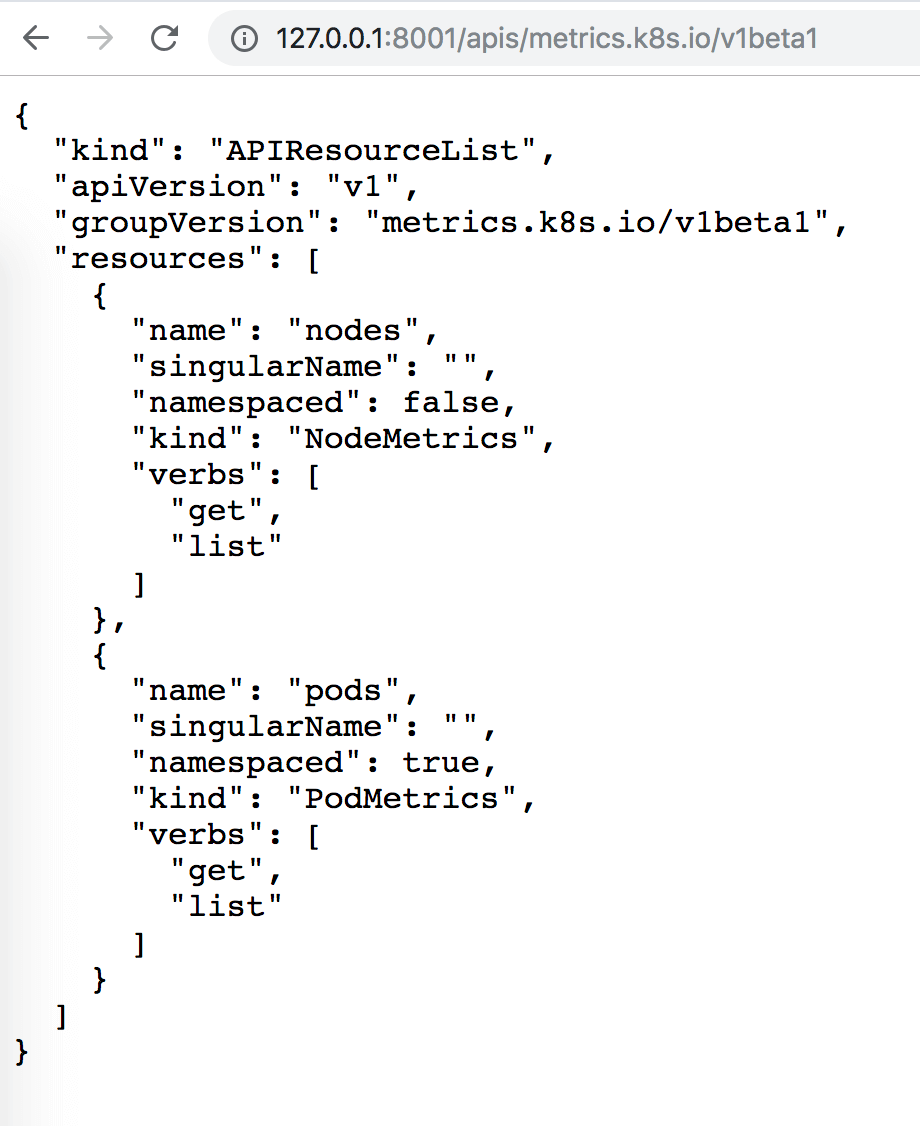 Having understood the basic components, let's put them together to make a core metrics pipeline. In the case of the core pipeline, if you have the metrics server installed properly, it will also create the APIService to register itself on to Kubernetes API server. The metrics will be exposed at /apis/metrics.k8s.io as we saw in the previous section and will be used by HPA.

In order to make the metrics available to the adapter, we will install Prometheus with the help of the Prometheus Operator. It creates CustomResourceDefinitions to deploy components of Prometheus in the cluster. CRD is a way to extend Kubernetes' resources. Using Operators makes it easy to configure and maintain Prometheus instances 'the Kubernetes way' (by defining objects in YAML files). CRDs created by Prometheus Operator are:

You can follow the instructions mentioned here to setup Prometheus.

To generate the metrics, we will deploy a simple application mockmetrics which generates total_hit_count value at /metrics. It's a webserver written in Go. The value of the metric total_hit_count keeps on increasing when the URL is visited. It uses the exposition format required by Prometheus, to display the metrics.

Follow the instructions to create a deployment and service for this application, which will also create ServiceMonitor and HPA for the application.

ServiceMonitor creates a configuration for Prometheus. It mentions the label of the service, path, port, and interval at which the metrics should be scraped. With the help of the label of service, pods are selected. Prometheus scrapes metrics from all the matching pods. Depending on your Prometheus configuration, the ServiceMonitor should be placed in the correct namespace. In our case, it's in the same namespace as mockmetrics.

Now to provide custom.metrics.k8s.io API endpoint for HPA, we will deploy Prometheus adapter. The adapter expects its config file to be available inside the pod. We will create a configMap and mount it inside the pod. We will also create Service and APIService to create the API. APIService adds the/api/custom.metrics.k8s.io/v1beta1 endpoint to the standard Kubernetes APIs. You can follow the instructions to achieve this. Let's take a look at the configuration:

Once you follow the steps, metrics value will keep increasing. Let's take a look at HPA now.

You can see how the number of replicas increases when the value reaches the target value.

The overall flow of this autoscaling is explained in the diagram below.

You can learn more about relevant projects and references here. The monitoring pipeline in Kubernetes has evolved a lot in the last few releases and Kubernetes autoscaling largely works based on it. If you are not familiar with the landscape it is easy to get confused and lost.

Published at DZone with permission of Bhavin Gandhi. See the original article here.