now as usual with big whoppers told by people in fear of their checkbooks, larry's rant has an element of truth. there is much cloud lipstick being sloshed on many a barnyard animal these days. but behind all the buzzwords , a basic shift is occuring - the wholesale outsourcing of core business applications.

forrester research has a simple chart that illustrates larry's dilemma - he paid $30b for a collection of low growth businesses, making oracle is the computer associates of the new millennium (and we know where this strategy got ca).

larry's rant is an extraordinary example of whistling past the graveyard. oracle's huge transformation over the last 10 years has been from an infrastructure company (databases & middleware) to an applications company (erp, crm, sfa ect). now, just as this transformation is completed, along comes an infrastructure that will obsolete all the applications oracle just got done rolling up.

no wonder he sounds ticked - you would be too if you just spent more than $30b (see oracle acquisitions chart below) on a bunch of wasting assets that are going to be shafted by the cloud/saas shift just as siebel's market share was eviscerated by salesforce. 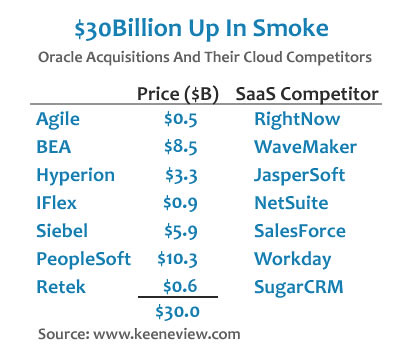