Are you a web developer or a website owner? Do your sites run on on custom PHP frameworks or PHP-enabled CMS such as Drupal, WordPress, Joomla or Magento? Then, this article is for you. Here, we will discuss everything about the latest version of one of the most popular programming languages in the world: PHP.

On June 23, 2016, the PHP development team announced the stable release of PHP 7.0.8. From security issue fixes to new capabilities, there’s a lot to get excited about in the latest PHP overhaul.

What Drove the Need for PHP 7?

Nearly 82 percent of websites use PHP, which means that most of the Web relies on the language to at least some extent. With an increasing number of people coming online, including a rapidly growing number of mobile users who often rely on relatively slow 3G connections, it is necessary for the servers that power the world’s websites to be able to react quickly to user requests. Studies show that 40 percent of people will abandon a web page that takes more than three seconds to load, demonstrating that speed is a crucial factor in website design.

Significant changes to PHP have increased the performance of sites that use the language dramatically. In fact, it is estimated that PHP 7 offers a 100% improvement in performance speed over PHP 5.6. This major improvement in speed allows web developers to create sites that provide interesting and engaging interactive features that still respond to user input as quickly as modern web users have come to expect.

Another motivation for the development of PHP 7 is the need to develop scripting languages that run more efficiently. This demand is driven by two factors: the need to reduce costs and the need to reduce power consumption to protect the environment. Compared to PHP 5.6, PHP 7 places substantially reduced demands on servers, which makes it a more cost-effective and environmentally friendly choice, as comparatively less energy is needed to power servers running PHP 7 applications.

Read More- PHP Vs ASP.NET: How to Choose the Right One

Since 1999, Zend engine is responsible for powering all versions of PHP.
Note that the Zend engine is not the same as Zend Framework. Zend Framework is an open-source C-based engine which works as an interpreter for PHP language.
Currently, the PHP 5.X uses Zend Engine II which powerfully enhances the functionality of the PHP 5.x based websites and adds the extensible object model, providing a performance boost to the language.

2. Twice the speed of Previous Versions

One of the most undeniable and visible advantages of the new PHPNG engine is the improvement in performance. PHPNG’s development team successfully refactored their Zend Engine and strives to provide remarkable improvement in memory. It also includes Just-In-Time (JIT) that provides the compilation done in run time – avoiding it to be done before the code execution.
A huge improvement in speed between PHP 5.6 and PHP 7 can be seen from the following benchmark tests for the WordPress versions, 4.1 and 3.6.
This concludes that fewer servers will serve the exact number of users when using PHP 7, but a code will be executed just as quick if not quicker. PHP 7 has also managed to outdone HHVM.

For PHP coders (until now), handling catchable fatal and just fatal errors was never an easy task. The newest Engine Exceptions allows you to replace such errors, keeping exceptions. Just in case the exception remains undiscovered, PHP will return the same fatal errors as they have in the 5.x version.

The newest EngineException object does not spread to the Exception Base Class. This cases backward compatibility and leads to two kinds of exceptions in terms of error handling:

In order to allow the developers to catch both errors, PHP 7 gives a whole new shared Parent Class, named as BaseException.

For those who didn’t know, PHP is a vital member of LAMP stack. This concludes that LINUX is their native environment, but it is possible to use PHP on Windows system as well. The 5.x version does not provide the 64-bit integer as of yet.

On the other hand, PHP 7 is set to change this by launching their consistent support to 64-bit, meaning that it will give both natives the support of large files and 64-bit integers. It gives developers the confidence of running language on their 64-bit Windows system as well.

With the benefit of adding Java and C+, PHP 7 allows programmers to add any anonymous class to their code. For those who do not know, an anonymous class is a class that has no name. Nonetheless, the object being instantiated has similar functionality as the named class object.
The Syntax is similar to the previous traditional PHP classes – just that the name is missing.
If you know how to properly use the anonymous classes, then you can speed up the execution time and the coding. It is wise to use anonymous classes just for the execution and in times when there is no need for a class to be documented.

6. Some Other Important Changes 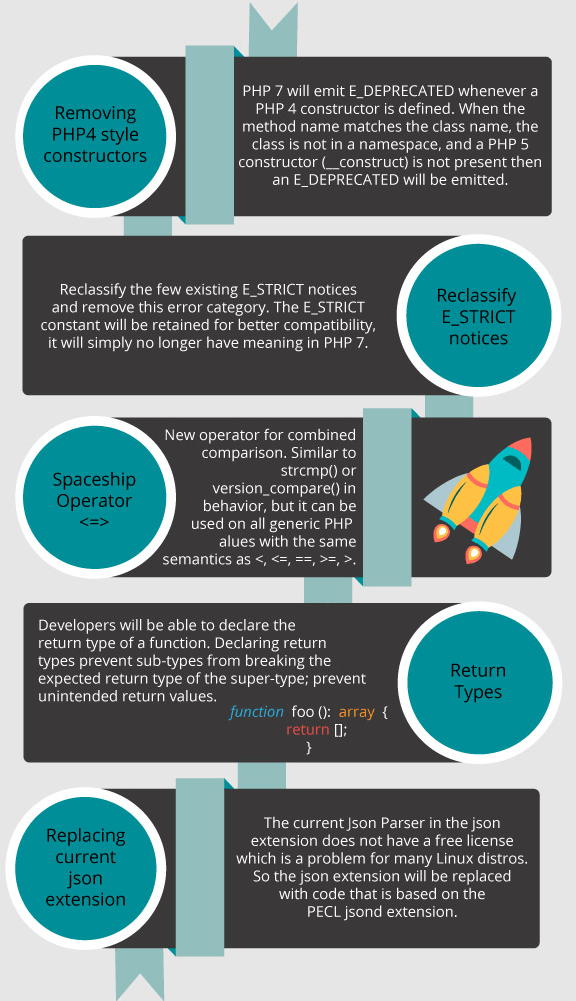 After getting acquainted with the exciting features of PHP 7, you would definitely want to know why PHP moved to version 7 from version 5. What happened to version 6? Well, PHP 6 was an experimental project that was officially started in 2005 and unfortunately abandoned in 2010. One of the main reasons behind the termination of version 6 was technical difficulties faced by PHP core developers during the implementation of language-integrated Unicode.

Meanwhile, people around the web adopted the name PHP 6 and started writing books and developing resources related to version 6. Since there might be confusion between the former attempt and the current development work, the PHP core team was compelled to seriously think about the name of the new major release. And finally, the development team decided to skip the logical number 6 and launch the new version under the name of PHP 7.

It’s clear that the new version of PHP boasts many new & exciting features and now its more efficient. PHP 7 cater to the need of present website.

Published at DZone with permission of Varun Bhagat. See the original article here.