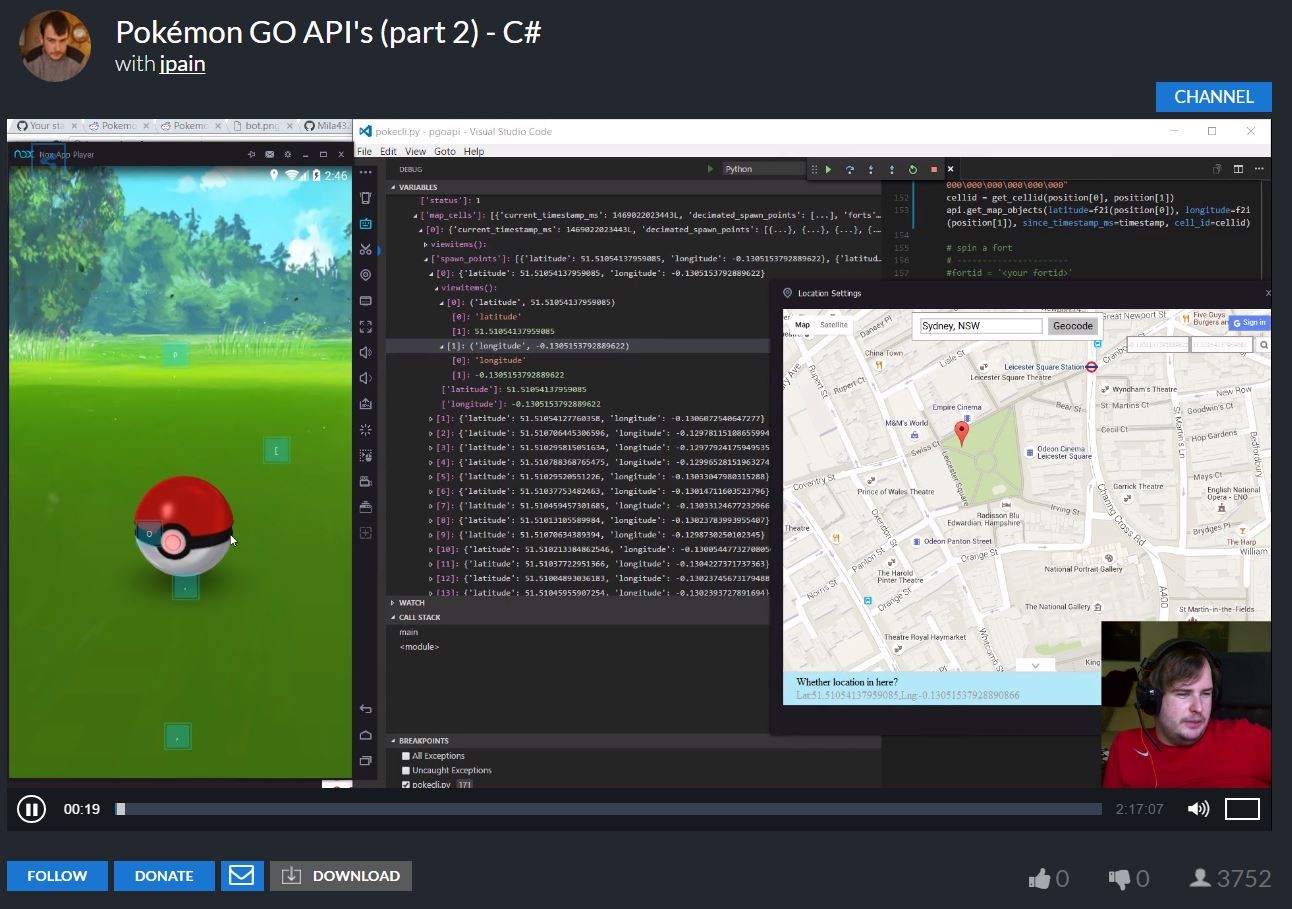 Hacking a game is not a big deal nowadays as almost every game is hacked to a certain extent. The repercussions, however, can easily be seen among the loyal followers as it tends to ruin the original experience. But hacking is not always a bad thing. For example, Pokévision, a geolocation app that utilizes Pokémon Go API, enables players to track Pokémons near any location. Sadly, Pokévision has been shut down, but that is due to API restrictions in the new Pokémon API update. In the meantime, new alternatives are already out!

In the past, hacking was generally viewed as destructive, breaking a system, or doing something bad. But, that’s not always the case. Hacking is a form of manipulating resources to bring the best to everybody. If you have ever changed or configured a device outside its default status, you have hacked the device. Hacking is better defined as experimenting rather than a destructive outlook as showcased in movies.

The approach to the game depends on what you are looking for. If you love Pokémon Go and find the exploration more enticing, you are in for a treat as we are going to discuss some simple hacks to gain more experience points (XP) points in an ethical way.

Note: Hacking doesn’t mean that we need to break the game. We utilize different game mechanics to bring in a lot of points.

For those still interested in playing the game the old way, you can check how developers like Jpain are taking advantage of the Pokémon APIs to create excellent tools for players.

You might ask why is it necessary to go through an optimal way to gain XP. According to a Reddit post, grinding easily sets in after hitting level 20. You can gauge the grinding needed at higher levels by checking the image below.

Before we move forward and discuss the different ways to earn more points in the game, let’s list the different events that offer XP in-game.

As you can see the most points are from either capturing a new Pokémon or evolving an existing one. Hatching a Pokémon also carries good weight, as it offers 200XP after completing the action. Other actions are valued less and range from 10XP to 150XP. It is not rocket science to know that you need to focus on capturing new Pokémons and evolving existing ones. After all, they give 500XP each!

Let’s discuss the different methods you can use to get more XP in Pokémon Go.

1. Learn How to Throw the Pokéball and Capture Pokémon

The first challenge is to master the craft of capturing Pokémons. It all starts with throwing the Pokéball. If your throw is not good, you might miss the Pokémon! Also, there are extra points for skillfully capturing the Pokémon. For example, you can throw the Pokéball in three skill types: Excellent, Great, and Nice. Mastering the Pokéthrow can give you a distinct advantage compared to other players. To make a skillful throw, you need to aim the Pokéball so that the Pokémon is within the smallest capture ring (shrinking). Initially, it will be tough to handle the throws, but with time you can master it and earn 100XP with Excellent throws!

Another way to capture the Pokémon is by curveball throws. Curveball throws offer small XP boost. It should also be noted that throw bonuses don't stack, and you will only get XP for one type of throw. For curve ball, you need to practice a lot. So how do you approach a curveball throw? All you need to do is swirl the Pokéball and release it when the sparkle appears. Simple, isn’t it?

2. Get Pikachu for Start [nonxp]

The game starts by offering you one of three Pokémons: Charmander, Bulbasaur, or Squirtle. Pikachu is everyone’s favorite Pokémon. But, how do you get a Pikachu? All you need to to do is refrain from picking any of the available Pokémons at the start of the game. The trick is, move away from the initial location a few times and come back. The game will automatically update the available Pokémon to Pikachu. Even though this trick won’t give you any XP boost, we highly recommend it! Go catch Pikachu and start your journey to catch ‘em all.

Capturing Pokémon is rewarding. But, evolving your Pokémon is equally rewarding! In both cases, you will get 500XP each. We have already discussed how to catch a Pokémon. Evolving a Pokémon requires clever use of two in-game elements such as Stardust and Candy.

To hack for more points, you need to sell the duplicate Pokémon to the professor. In exchange, you will get candy, which in turn can be used to evolve your Pokémon to the next level.

Also, there is no point in gathering low Combat Point(CP) Pokémons as they don’t yield much value when fighting other Pokémons. They also don’t add value to your collection. You make the most of the low CP Pokémons by selling them and concentrating on evolving your higher level Pokémons. The higher CP Pokémons will help you win Gym battles, which will earn you a hefty XP in return!

If you don’t want to get distracted by the background and want to capture Pokémons without any disturbances, it is a good idea to turn off AR, or in other words, turn off your camera. The game uses the camera of your smartphone to project Pokémons in the environment. Turning off the camera will help you capture Pokémons with added, skillful throw bonuses and let you focus on the Pokémon rather than the environment.

Pokémon Go requires a lot of walking. To maximize the benefit of walking, you might want to install it on all your devices. This way you won’t miss the smallest bonus when using other devices. Also, it is a good idea to install it on the most-used device, which you carry around at your workplace, while shopping, while with friends, etc. This simple hack can help you gain a lot of XP in Pokémon Go.

If you are feeling lazy and don’t want to walk to complete small game actions such as hatching eggs, you can actually trick the game to capture motion even if you are not moving! Movement for the app is defined as the change in coordinates, and it doesn’t really take into account how it is done.

Below are simple hacks that you can utilize to fool the app to think you are moving.

Note: Don’t hop in your car and drive, as the game won’t register the high speed of movement. It is better to use the tricks mentioned below:

7. Do Not Play Pokemon Go Directly on Phone

Smart Pokemon Go hackers play Pokemon Go from their Linux Terminal command line using scripts built in Java and Python, which take over the actual playing of the game. They gain experience points even while sleeping.

In short, you can use any moving device in your home to take advantage of the inability of the app to read how the movement occurs.

Here you go! Now you have learned the methods of Pokémon Go hacking. The methods are not game-breaking, and do not violate any game rules. So you can proceed with them without worrying about your account getting banned.

Coming to unethical hacking, hackers have already started developing APIs for Pokémon Go. Check it out by clicking here. Also, the new Pokémon Go update by Niantic has limited the use of their APIs in a very restrictive way. The restriction led to the shutdown of PokéVision and similar apps.

So what you think about playing Pokémon Go? Do you think it is okay to use hacks and simplify your gameplay? Or do you believe in playing the vanilla game? Let us know in the comments section below.