The goal of Levels of Testing is to make software testing more structured and efficient, as well as to make it easier to identify all available test cases and test scenarios at a given level. There are various steps in the SDLC paradigm, such as requirement gathering, analysis, coding, design, execution, testing, and deployment. All of these steps go through the software testing process's tiers of testing.

There are numerous testing levels that are employed or assist in the verification of actions and performance in software testing. These testing levels are intended to fill in any gaps, and they are re-coded and re-linked as the development lifecycle progresses. 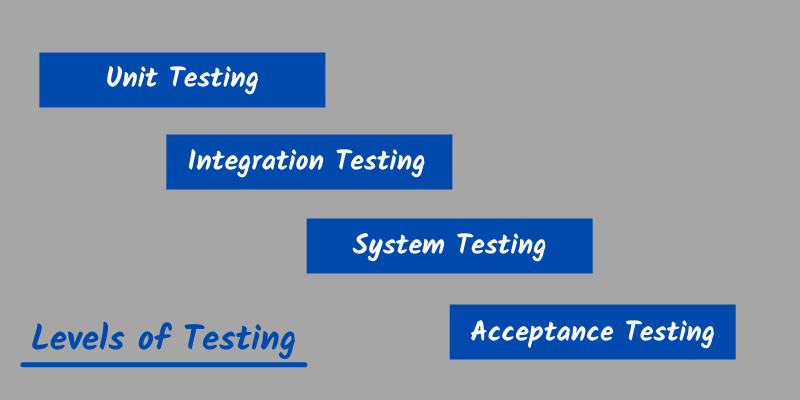 In software testing, this sort of testing is used to test a single component or unit, and it is carried out by the developer.

The fundamental goal is to verify each individual component or unit is proper in terms of fulfilling requirements and desired functionality, and the unit is the smallest testable element of the system or application.

The key benefit of these tests is that by finding any mistakes in the software early in the day, the team decreased software development risks, as well as the time and money wasted in having to go back and fix fundamental flaws in the program when it was virtually finished.

Integration testing is merging several software modules and phases and testing them as a group to determine whether the integrated system is ready for system testing or not, and there are numerous techniques to test how different components of the system interact.

Integration testing is carried out by testers, and it determines how data flows from one module to another.

System testing is most likely the last step in ensuring that the system fits the requirements and criteria, and it assesses both functional and non-functional requirements.

System testing allows you to examine the system's compliance with the requirements, and all of the software's components are tested as a whole to guarantee that the overall product fulfills the specifications. It involves load, reliability, performance, and security testing.

System testing is critical because the software is virtually ready for market production, and once deployed, it can be tested in an environment that is extremely similar to the market/user-friendly environment that the user will encounter.

Acceptance testing is used to determine whether a system meets end-user criteria and is ready to be deployed.

The tester will test the software using a variety of methods, including pre-written scenarios and test cases, and will use the results to identify ways in which the system can be improved. The QA team or testing team will also be able to determine how the product will perform once it is installed on the user's system.

Acceptance testing covers a wide range of topics, from simple spelling errors and visual flaws to issues that could result in a catastrophic application failure.

Other Types of Testing

All layers of testing are required and must be completed before the application/software can be released. Meanwhile, you could want to look into the different methods of software testing to double-check the most crucial details.

It is really important that you test as soon as feasible and as frequently as possible. By adopting a constant vigilance and checking viewpoint in all your projects, as well as by a systemized approach to testing, the tester can detect any defects in the system as soon as possible, which is a waste of time and money later.

Published at DZone with permission of Lakhaman Katara. See the original article here.