What is Li-Fi? What is the difference between Li-Fi and Wi-Fi? Is Li-Fi replacing the Wi-Fi? What will be the reward of using Li-Fi as compared to Wi-Fi. These are a few very important questions that are bound to be in your head. We will answer all of your questions in this very meaningful and detailed article. 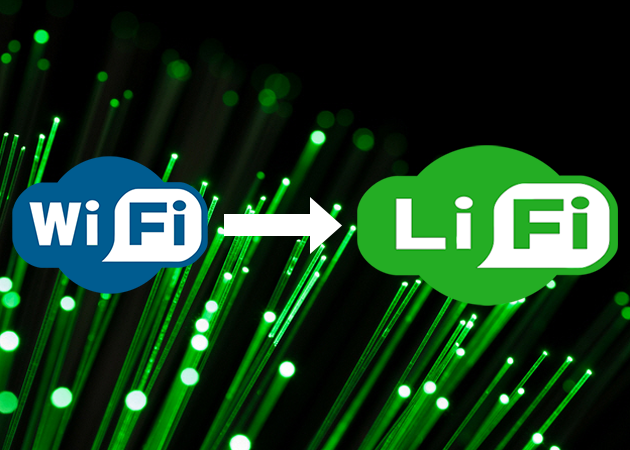 5 Great Points About Li-Fi You Must Know

Li-Fi is a great innovation in the IT world and does not use radio waves like Wi-Fi, but uses infrared light as the source, with the help of an LED (light-emitting diode) as a way to complete its transmission of data. Scientists say that Li-Fi can reach speeds of 1 Gbps in real-world use and is 100 times faster than average Wi-Fi speeds, which means you could download a high-definition movie within a few seconds. How amazing is this?

The People Behind Li-Fi

Li-Fi was first invented in 2011 by Harold Haas of the University of Edinburgh. Haas uses VLC (visible light communication) to send data at very high speeds. In addition to this, Velmini, a tech company in Tallinn, Estonia, is the first to test VLC technology in a real-world scenario, and using Li-Fi-equipped LED lights. According to the International Business Times, “Data transmission rates reached 1 gigabit per second (Gbps), however, Li-Fi lab simulations recorded speeds up to 224 Gbps." Apart from the superior speed of Li-Fi, it boasts many other benefits over Wi-Fi. For example, the signal is carried by optical light in Li-Fi, which means it cannot travel through walls. The utility challenge of this can potentially be overcome, but it does mean better security. 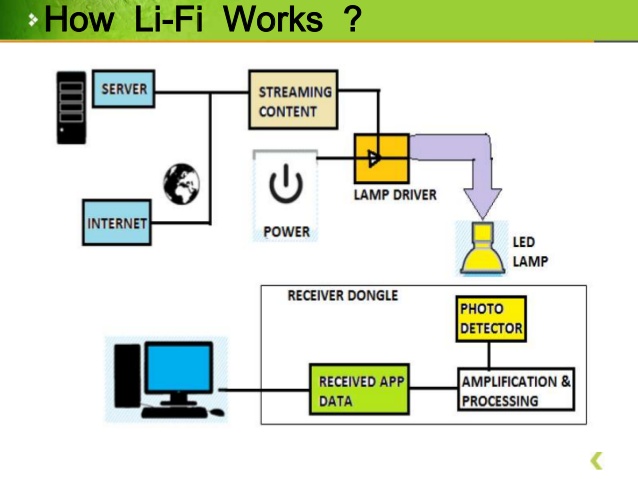 In a recent TED (technology, entertainment, design) talk, Haas insisted that house LED lightbulbs could be converted into Li-Fi transmitters easily, giving Internet users more efficient connections. Also, the inventor of Li-Fi, professor Harald Haas stated in an interview with TED, 'No we do not need costly types of light for Li-Fi to work. All we need to do is fit a tiny microchip to every potential illumination device, and this would then combine two fundamental functionalities, which are illumination and wireless data transmission.”

Haas also said, “This new innovation would transform any LED light-bulb into an ultrafast wireless router. Also, we will not only have 14 billion lightbulbs in the future, but we may have 14 billion Li-Fi lights deployed globally for a cleaner, greener,  or brighter future.”

How Does Li-Fi Works?

Usually, Li-Fi networks work like any of your Internet networks, but it uses the light of your LED for data transmission, also known as VLC.

A VLC light source could come from an LED bulb, which are the best option for implementing Li-Fi, because a robust Li-Fi system needs very high rates of light output. LED is a semiconductor light source, which means that LED light bulbs can amplify light intensity quickly. So, LED cells can modulate thousands of signals, and in turn, the changes in light intensity are interpreted and converted as electrical current by the semiconductor device. In addition to this, once the electronic signal is demodulated, then it is converted into a nonstop stream of binary data consisting of audio, video, web, or application information to be taken in by any Internet-enabled device.

Li-Fi can also function as a bidirectional communication system like conventional broadband and Wi-Fi. A mobile phone can send data back to the light source for uplink by interchanging infrared light and visible light from a photo detector,

What is The Difference between Li-Fi & Wi-Fi? 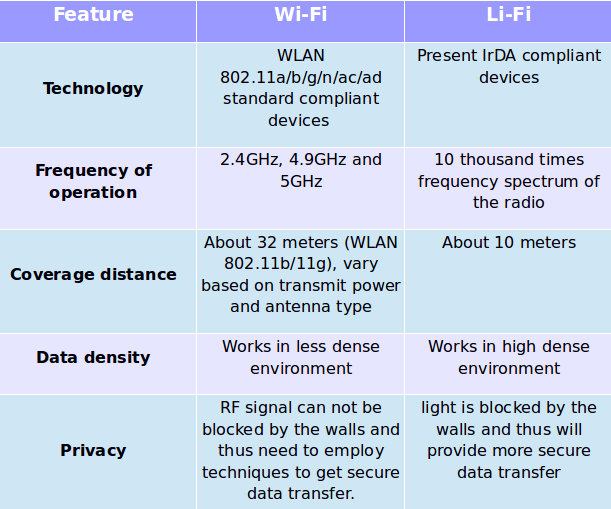 Do you know that Li-Fi has already become a popular way to transfer data? Optical light is already used in fiber optic cables, but Li-Fi has never been used on a large scale as it is still in the initial stage of development. China has become the most advanced country in the sphere of using Li-Fi in place of Wi-Fi recently. So we can hope that this new way of connecting via Li-Fi will be here soon. Haas estimates that the technology be ready for public use within the next 2-3 years.