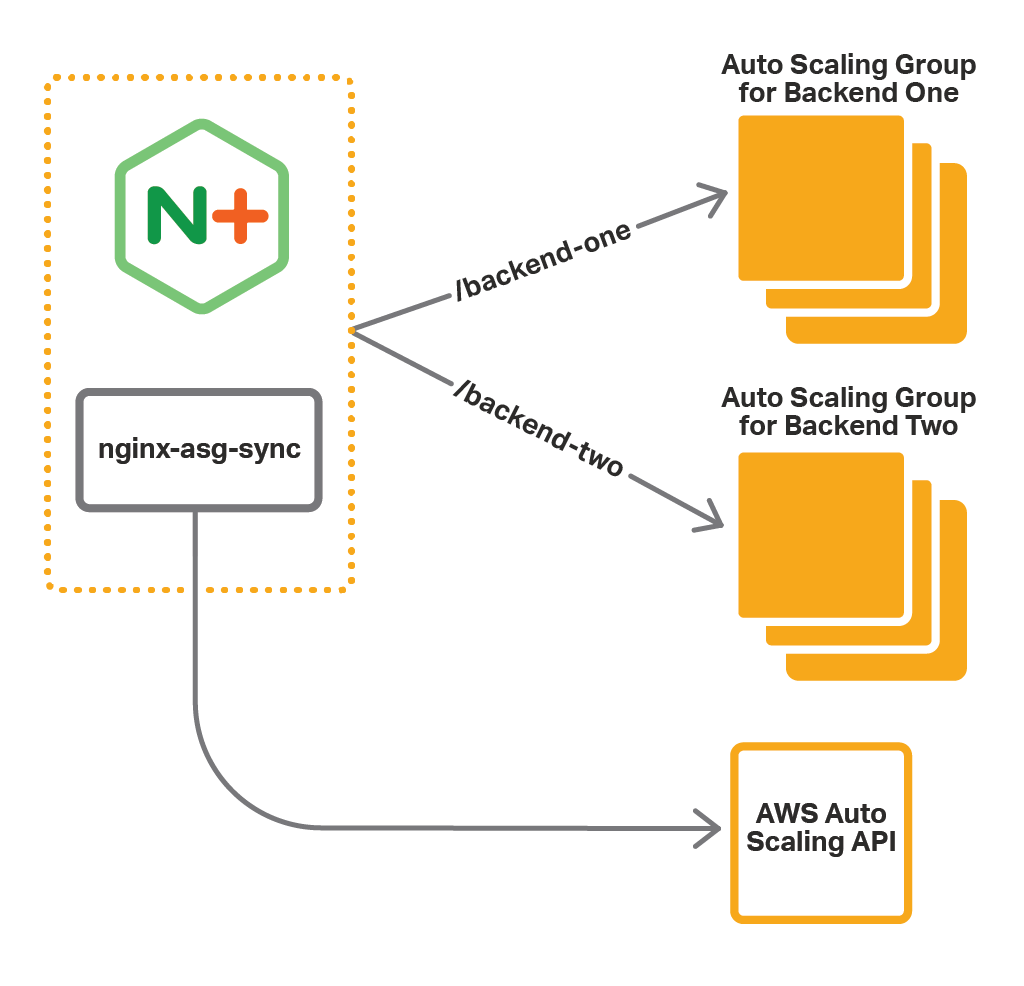 There are three main reasons to choose NGINX Plus as a replacement or an addition to the built-in AWS cloud load balancers:

To see how NGINX Plus compares to (and works together with) the AWS built-in solutions, read our blog posts on ELB and ALB.

In this blog post we show two methods of configuring NGINX Plus to load balance Auto Scaling groups, and explain when it makes sense to use each method:

After reading this blog post you will be ready to deploy NGINX Plus on AWS to provide advanced load balancing for Auto Scaling groups. 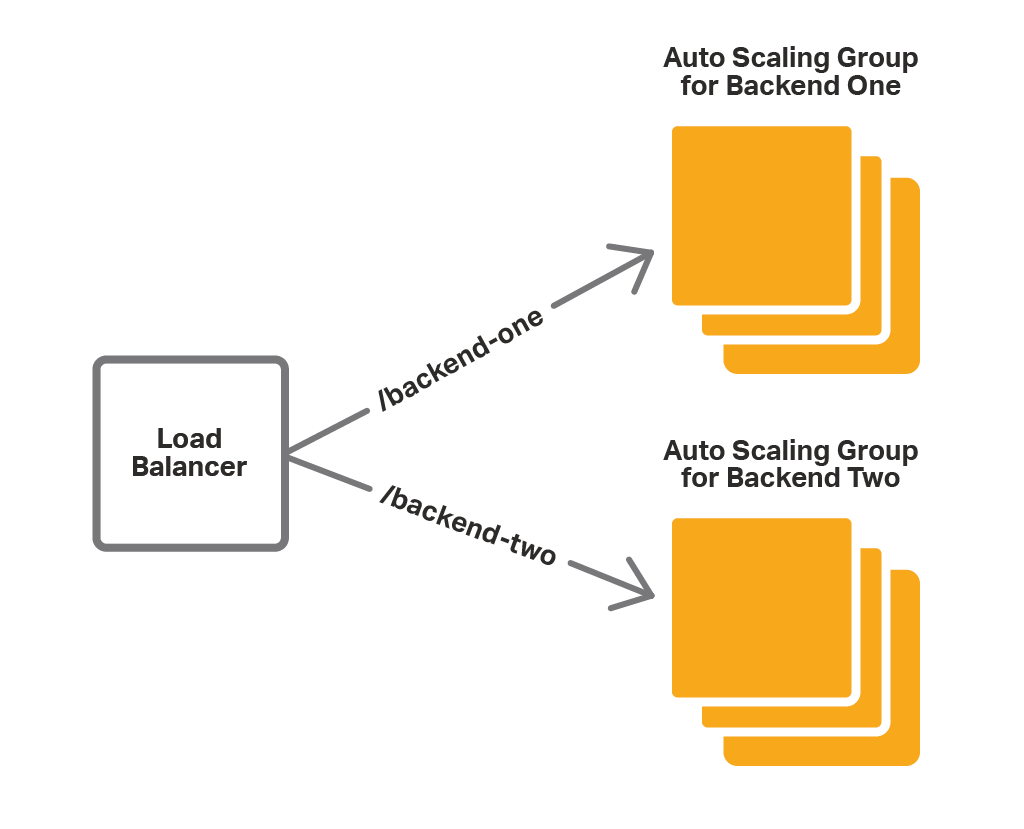 When we scale the application Auto Scaling groups (either automatically or manually), the load balancer configuration must be updated to reflect the new number of application instances. The built-in AWS load balancers do this automatically. For NGINX Plus, we need to propagate scaling events to the configuration with one of the methods mentioned above (NGINX Plus in front of ELB, or NGINX Plus with the integration software).

Another way to update the NGINX Plus configuration in response to scaling events is with an external service registry. NGINX Plus supports integration with service discovery systems that provide a DNS interface, such as Consul. In this blog post, we focus on solutions that do not rely on using external systems and that are easy to set up and use.

Using NGINX Plus in Front of ELB

If you are already using Auto Scaling groups and ELB, the easiest way to bring some of the advanced features of NGINX Plus to your application is to place NGINX Plus in front of the ELB cloud load balancers, as shown in the diagram: 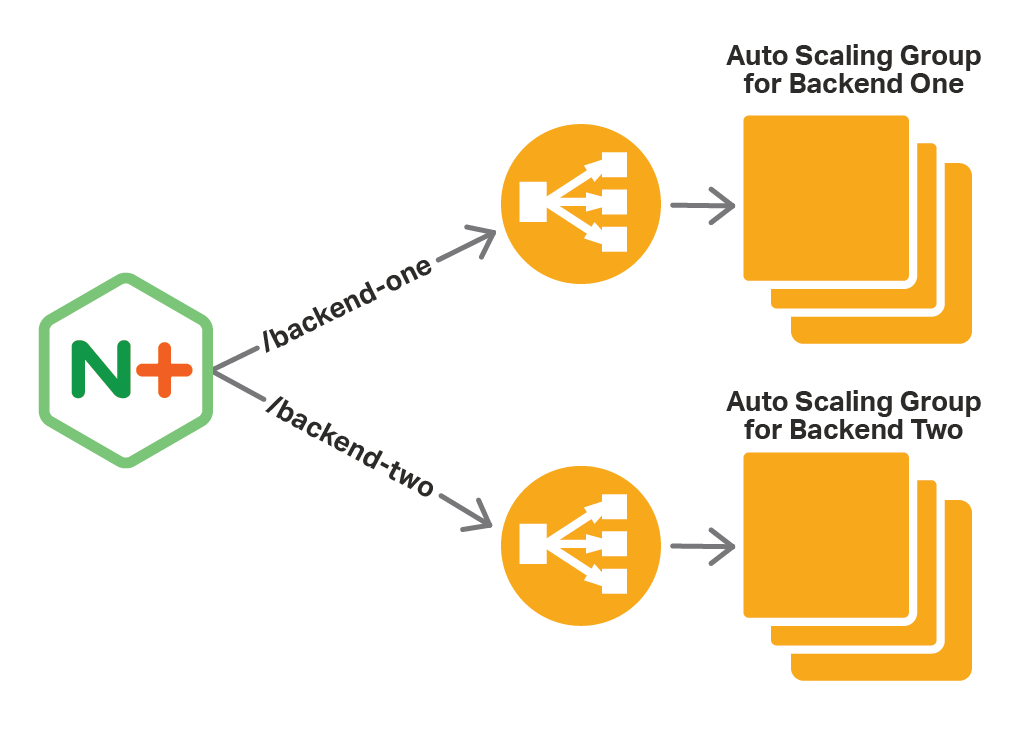 In this case, NGINX Plus acts as a proxy/load balancer for one or more ELBs. Using its advanced routing capabilities, NGINX Plus forwards requests to the appropriate ELB based on the request URI. The ELB then passes the request to one of the instances in the Auto Scaling group. In this configuration, ELB provides the support for scaling.

Here is the NGINX Plus configuration:

The resolver directive defines the DNS server that NGINX Plus uses to resolve the DNS names of the internal ELB instances. Here it is the IP address of the AWS DNS server.

We create two upstream blocks, one for each Auto Scaling group corresponding to our services, Backend One and Backend Two. We identify the Auto Scaling group by the DNS name of the ELB that load balances traffic to it. Using the resolve parameter, we tell NGINX Plus to periodically re-resolve the name – the frequency is set by the valid parameter to the resolver directive discussed in the previous bullet. Here we set it to 10 seconds because the IP addresses of ELB are subject to frequent change. The zone directive allocates memory (here up to 64 KB) for storing the resolved IP addresses.

As you can see, this method is easy to set up and use, especially if you are already using ELB. However, there are several drawbacks:

The next method does not rely on ELB and consequently does not have those disadvantages.

Using NGINX Plus With the Integration Software

To use the integration software, perform the following steps:

The instructions assume that the Auto Scaling groups for the backends already exist. They also assume that NGINX Plus is running on an Amazon Linux AMI.

Communication with the Auto Scaling API is authenticated, so you must provide credentials for nginx-asg-sync. AWS uses IAM roles to handle credentials, so you need to create a role for the NGINX Plus instance before launching it. For step-by-step instructions, see IAM Roles for Amazon EC2 in the AWS documentation.

To install the integration software, download the package for your operating system from the nginx-asg-sync GitHub repository, and install it on the instance where NGINX Plus is running.

For Amazon Linux, CentOS, and RHEL:

For complete installation instructions, see the documentation on GitHub.

The integration software updates NGINX Plus configuration using the on-the-fly reconfiguration and live activity monitoring APIs. For the software to work properly, you must configure those APIs as well as declare the necessary upstream groups:

The following example represents the configuration for our simple web application:

The integration software is configured in the file aws.yaml in the /etc/nginx folder. For our application, we define the following configuration:

After you edit the aws.yaml file, restart the software:

Now, we scale up the Backend One group from three to five instances by changing the capacity of the Auto Scaling group. After the new instances are launched, nginx-asg-sync adds them to the NGINX Plus configuration. Soon enough the new instances appear on the dashboard: 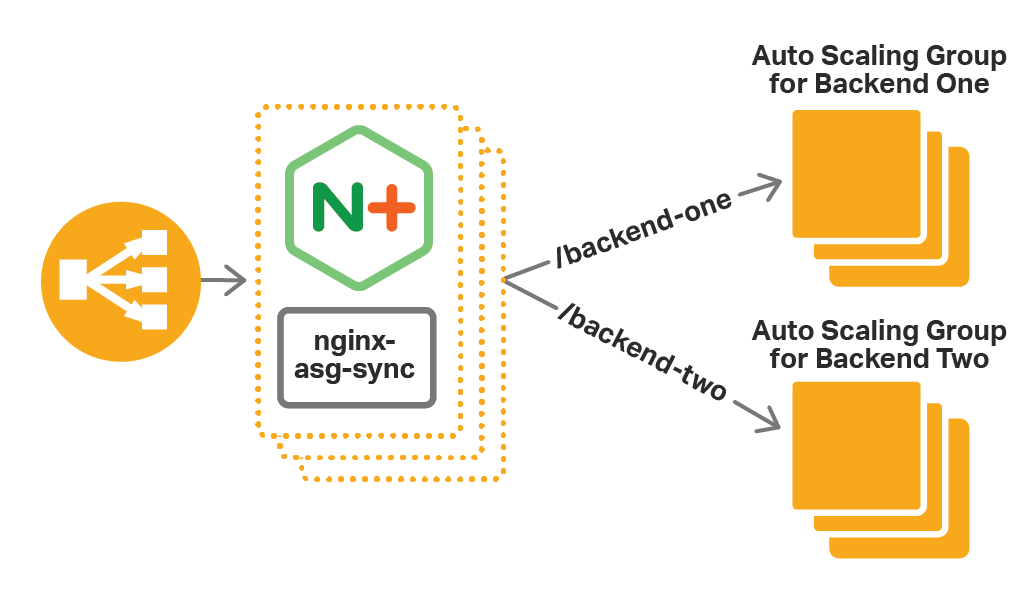 So, which method of configuring NGINX Plus to load balance Auto Scaling groups is better for you? The table briefly compares the two:

AWS Auto Scaling provides the benefit of adjusting the number of application instances to the level of demand. NGINX Plus provides advanced load-balancing features that can be used in conjunction with AWS Auto Scaling groups.