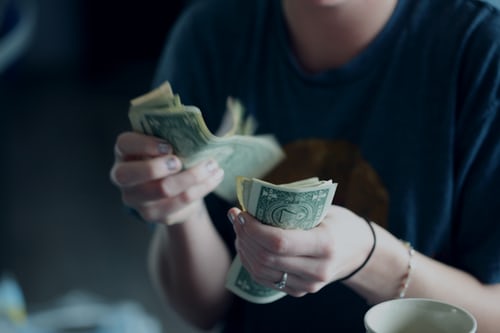 In the United States, the money spent for political reasons is immense and growing, especially since the Supreme Court struck down limits on federal campaign donations. More than a year away, candidates for the 2020 federal elections have already raised more than $800M. An alternative way to influence federal politics is via independent or non-coordinate spending, also known as soft money, where the political expenditures are not coordinate with candidates but advocate for or against candidates or issues. Dark money is political spending by non-profit organizations where donors can remain anonymous.

An example of political spending occurring outside of election campaigns is lobbying. While the exact definition of lobbying differs — e.g., federal vs. state, state vs. state — in general, lobbying attempts to influence a politician, legislature, or public official to see a specific view on an issue, law, policy, regulation, etc. Lobbying has been present since the founding of the United States and is protected by the First Amendment as freedom of speech and right to petition. In 2018, almost $3.5B was spent lobbying the federal government.

Prior to 1996, there was little transparency about lobbying the federal government, but the Lobbying Disclosure Act of 1995 increased accountability by defining lobbying in law and, more importantly, requires that lobbying efforts are documented through filings made to the US Senate and House of Representatives.

On the Senate site, the filing data is available as zipped XML documents by year and quarter since 1999. A completed XML file contains approximately 1000 filings, though some contain less (likely dependent on their internal system into which filings are uploaded).

Using relational database terminology, the top-level <Filing> node is an associative entity, which pulls together all the related information about the filing — i.e., unique identifier, period represented, dollar amount spent for effort, date of filing — and the child nodes are the specifics.

The basic process for loading the filings data is fairly straight-forward:

The documents are well-formed, so using JAXB for deserializing the XML is fairly straight-forward. I manually created an XSD representing the XML data and generated annotated POJOs that could be used for iterating through the filings.

After different attempts, here's how I ended up modeling the data: 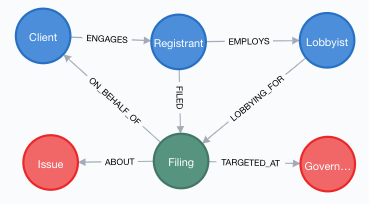 My next article will demonstrate different ways to query the database for interesting facts.

The project source can be found on GitHub.