This is the first in a three part series on looking at creating "local" microservices.

Structurally, Object Orientation joins objects together in a very nice graph. These typically look something like the following: 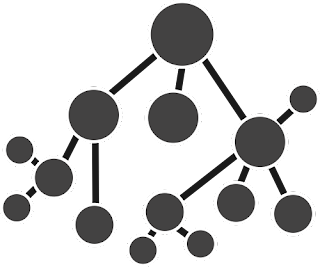 These graphs represent the object relationships in your application. Each line is a field reference to another object. This, for example, allows modelling your personal details to have addresses, phone numbers, and various other objects containing information.

So, we can just draw the above graph with the methods calls, right?  No, the method coupling is a lot more complicated than just an object reference that varies at most by type (see Inversion of Coupling Control).  Methods have:

Drawing a simple line between objects to represent behavioral relationships (program control flow) does not respect the method coupling complexity. In the object structural graph, changing a line is simply changing the reference (memory address) to another object. Yes, restrictions apply based on the type of object referenced, but it is a single address value that couples the two objects into a structural relationship. This is not the case with methods.

Each method call is a different shape. In terms of object structural connectors, the shape of the object reference is the object type and memory address. This is consistent across all object references. However, for methods the call (connectors) are different shapes due to the above five aspects. In other words, one method may haveone  parameter, while another has three and throws two exceptions. The shape of each method call connector varies significantly.

Drawing the behavior diagram of object method calls is more akin to the following: 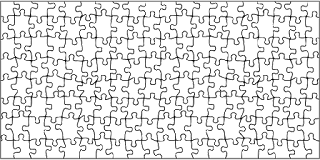 Each call (connector) between the methods is a different shape, just like a jigsaw puzzle.

We piece objects together into a jigsaw puzzle to achieve the behavior of the application. This is why refactoring your application is so difficult. It's like trying to move pieces of a jigsaw puzzle around to make a new picture. We end up having to change the pieces significantly just so they even attempt to fit into the new picture.

It is also the reason, I believe, why object orientation never provided that ideal class re-use. Re-using objects is like trying to re-use jigsaw pieces of one puzzle to complete another puzzle. Now if the puzzles are somewhat alike, you can kinda jam them together. However, more often than not, you have to change the piece (object) to fit into the other jigsaw (application) losing re-use.

Now I can continue the analogy further with much of API development attempting to standardize jigsaw pieces and finding generic pictures that represent the majority of systems. However, I'm hoping you can join me in seeing that much of the Object Orientation behavior coupling problem is not with the objects but rather the use of methods.

Stay tuned for my next part on how microservices are helping with relieving the Object Orientation method coupling problems.