We take for granted opening up an app on our phone and entering an address and instantly getting directions to our destination. When GPS was first proposed, it was almost too good to be true. It seemed so improbable that a bunch of satellites orbiting at high speed and high altitude could locate me within a few feet here on earth. But as it turned out, it works extremely well and is embedded in so many things we use today. Even my latest (completely unnecessary) drone is not flown like aircraft but rather is moved up and down, left and right, and forward and backward on a GPS grid: an invisible set of rails in the sky. So it's a little shocking to realize that when we send a craft to the moon or Mars (and someday soon to Europa and Titan) that we have to rely to a great extent on dead reckoning, looking out the window, and aerial photographs. If (like me) you stay up nights late worrying about that problem, then rest assured NASA is working on a solution.

It turns out that the NASA Frontier Development Lab, which labors on a lot of cutting-edge projects for space-based applications happens to have a project devoted to navigation on other celestial bodies.

[For those of you who are insatiably interested in this topic, there is a 2 1/2 hour video that FDL released covering several of their projects. The presentation corresponding to their AI/GPS localization starts at about 48 minutes into this August 16 video.]

Approaching this problem, NASA realized that placing a large number of very expensive GPS satellites around every planet and moon they wanted to navigate around was prohibitively expensive. So they approached the problem again with the goal of re-creating the functionality of GPS... but without the satellites.  Their idea was to use AI and lots of photographs of the target world. The plan had merit since whenever we visit a new planet or moon we already intend to take highly detailed photographs of the entire global surface.  So, for this project, they created a highly detailed digital model of a virtual moon upon which they could place a virtual rover to drive around and take pictures. A lot of pictures. In this case 2.4 million pictures. But it was virtual so what the heck!

Researcher Andy Chung said "... using the real moon isn't actually critical, it would likely improve performance in a real mission but a key point of our work is that it teaches a network to learn general distortions caused by general landscape topologies." The idea behind this new space-based GPS is that a rover or an astronaut could just snap a picture or two of the surrounding landscape and the AI could understand the distortions that would occur with known features from the point of view of the camera's arbitrary position on the surface.

Andy and his fellow researchers Philippe Ludivig, Ross Potter, and Benjamin Wu developed a system to teach an AI what the moon looks like by feeding it millions of images and then use a neural network to examine this virtual moon. The idea is that it should be theoretically possible to identify your location by comparing a picture from your location to an AI digested database of previous pictures of the moon surface. It isn't perfect yet, but NASA seems hopeful.

Given the promise shown by this technique on a well-controlled virtual moon, the research team believes that there are enough images of Mars (and that number is growing all the time) to do something like this for Mars in the very near future. 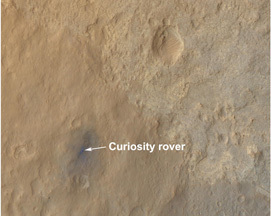 Clearly, this kind of system is not as easy to use or as accurate as conventional satellite-based GPS, but it will certainly provide much-needed location services for the early exploration of every new planet and moon. NASA has been critically aware of the need for GPS on Mars for a long time. Here's an interesting story from July 2004 about NASA's early work for an actual Martian satellite-based GPS system. In this story, Mark Maimone, MER mobility engineer at JPL, points out the tedious dead reckoning mechanisms that are required for rover navigation without GPS. But being totally realistic (from a 2004 perspective) Chad Edwards Chief Telecommunications Engineer stated, "That's a luxury we won't soon see at Mars." 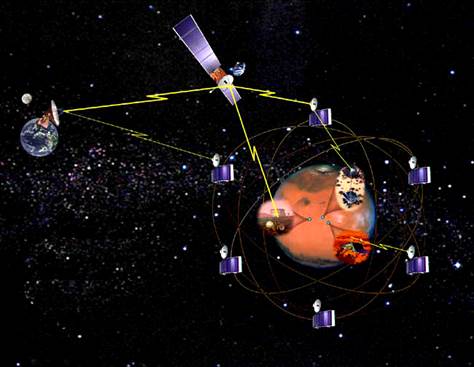 In the future, exploration and colonization will require this on Mars. But no worries: who among us doesn't believe that Elon Musk and SpaceX aren't making plans to drop a few GPS satellites around Mars as part of their early colonization efforts?

Then, we will all be able to geotag our Martian vacation pics!