in the previous entry, we tried to cover what we saw at the first day of lucene eurocon 2011 conference. however, from our point of view, the second day was the more important one, due to the fact that this was the day we had our talk. but let’s start from the beginning.

day two began with one of the better, in my opinion, talks during lucene eurocon 2011. michael busch, during his presentation titled “realtime search at twitter” ( slides , video ) showed us what the twitter team to handle real-time search based on lucene, so that the whole system was able to handle the daily traffic of twitter. the presentation consisted of a very large amount of technical details, details that were explained in details. conference participants, in addition to the information about lucene, also got a brief lesson of java multithreaded programming

what will come (lucene today, tomorrow & beyond, simon willnauer)

the conference was divided into three parallel sessions, and we chose the presentation titled “lucene today, tomorrow & beyond” ( slides , video ) , led by simon willnauer. the presentation focused on what lucene is not capable of at this time, and what it may be capable of in the future (for example, in version 5). simon began by presenting the history of lucene, the people involved in the development of the project and the companies they work for. then we found out what users can expect from lucene (in terms of functionalities), when version 4.0 is officially released. during the talk, simon also talked about that the role of positions of tokens in the token stream, incremental updates and jit. at the end we were shown a part of his vision of lucene and solr as a modular projects. 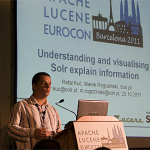 for personal reasons and because i wanted to prepare for the talk i desided to skip one of the talks. and after the lunch, my talk began. the presentation titled “understanding and visualising solr ‘explain’ information” ( slides ) was divided into two parts – first, the theory regarding the information returned by apache solr and the second – what we have done for http://explain.solr.pl . let me not to comment on my own presentation, and focus on what i felt after it. unfortunately, i was not pleased after the talk, stress ate me alive – i didn’t say all i wanted to say, i rushed and not explained what i wanted to. but now, after having some experience i can promise one thing – next time will be better, much better. i am pleased with the positive reception of the talk and the topic itself.

after a short rest we went to listen as david weiss talks about tests using a random factor during the talk titled “randomized continous testing: solr & lucene use case” ( slides ). if you are interested about the automated testing (and you should be) i definitely recommend the slides, as well as video as soon as it’ll be available. david started with the theory about where you can add a random factor to the tests (of course everything in the context of lucene and solr). then we got a good deal of technical information on how to implement a randomized test (with examples of course). there were also information on how to test multi-threading.

staying in the topic of testing, we decided to go to the last talk during lucene eurocon 2011 titled “better search engine testing” ( slides ), led by eric pugh.

the last attraction in the lucene eurocon 2011 was the “commiter panel” – the meeting of conference participants and the people that develop apache lucene and solr every day. after brief introductions, there was a series of questions and answers. if you are interested how the meeting went, you will have to wait for the video material. another interesting presentation, at least from my point of view. eric started from the fact that search, and particularly good search is increasingly important in today’s world. what’s more, data storage is cheap, but data management is by no means cheap, and therefore the role of search engines will increase. eric then turned our attention to the problem of testing the search engines, what should be tested and how we can automatically test the search engines. it’s hard to write a summary of that talk, due to the large amount of information that eric had given.

i would also like to invite persons interested in presentations other than those discussed in this and the previous entry to the following sites:

the talks at the conference were miscellaneous – there were strictly technical subjects and those that focused on the user. because of the three parallel sessions, it was impossible not to find the presentation for yourself – the organizers deserve thanks and congratulations, they did a very good job. i hope that we will meet most of this year’s participants in the lucene eurocon 2012