At the Build conference in September 2011, Microsoft provided details about their next operating system release, code name“Windows 8.” Leading up to this conference there has been a fair amount of uncertainty about the future direction of the Microsoft development platform, including Microsoft .NET and Silverlight.

The new WinRT API and the Metro style applications it enables may represent the future of smart client development on the Windows operating system. However, it is important to understand that Microsoft stated their clear intent that all applications that run today on Windows 7 will run in the Windows 8 desktop environment. This means that applications built using Silverlight, WPF, Windows Forms, or other existing technologies will continue to run on Windows 8.

WinRT is a new operating system programming interface (API), updated for modern technologies and concepts. It replaces the aging Win32 API, enabling the creation of applications that can better take advantage of modern networking, power, and user experience technologies.

No current technologies directly map to the WinRT/Metro environment. The current technology that is closest to WinRT is Silverlight. Developers using Silverlight today will find that their skills remain relevant, and that much of their code can be rewritten for WinRT with reasonable effort.

Developers using WPF and HTML5 today will find that their skills transfer to WinRT, but it is unlikely that existing WPF or web application code will easily move to WinRT. This document will explain the Windows 8 development environment, based on the current understanding of the technology. It will then discuss high level migration strategies from today’s technologies to WinRT. 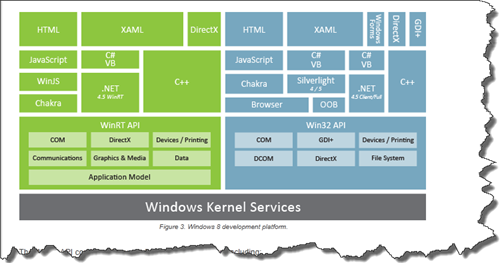 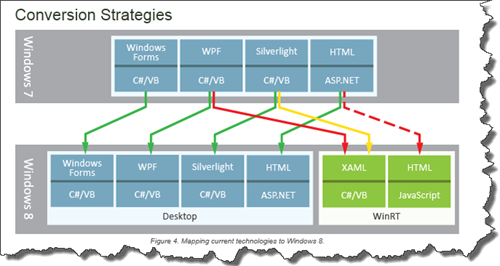 I had to chuckle at the Windows 8 Development Platform diagram (aka the Win8 Dev diagram that everyone redraws). I swear we need to have a contest to see who can best articulate and diagram what Microsoft tried to do at BUILD...

Even though we're not even at the Win8/WinRT beta stage yet, I thought this an interesting White Paper and if you're starting to wonder about this whole Win8/WinRT thing, this Paper should be at the top of your stack.

BTW, if you're thinking about printing this, make sure you grab the 6 page PDF version (click through and the link is on the right... hard to miss it). 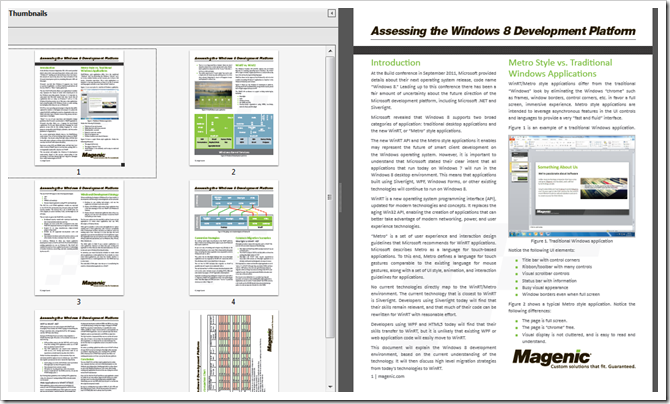