Docker Swarm Mode is the built-in orchestration engine bundled with Docker 1.12. The Docker team has made a product that allows deploying a multi-host docker cluster a ridiculously simple and amazingly quick affair. I am not sure if it is still production grade compared to some of the older compatriots such as Kubernetes, but the experience of playing with it is surreal.

The objective of this article is to show you how to quickly deploy your complete application in Docker Swarm. I am building on the example that I showed in my previous article – Serverless Computing with Spring Cloud. I have identified Docker containers in the application below that we would deploy on a swarm cluster. 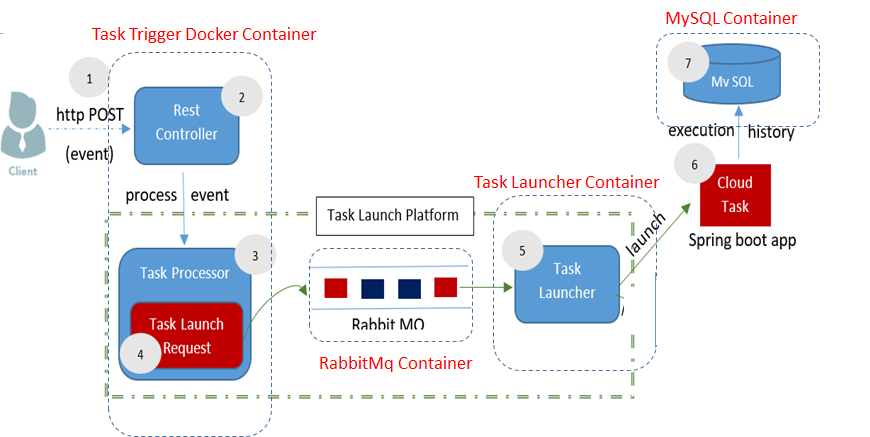 Quick Recap of the Application

Docker Swarm has two types of Nodes – (i) Manager (ii) Worker. You can have multiple manager and worker nodes. One manager node is qualified as the leader. Managers talk amongst themselves using the Raft Consensus algorithm. Workers gossip (protocol) among each other.

You launch services on the swarm. Each service has multiple tasks (read containers) associated with it. Service can be scaled up by launching multiple tasks across available nodes in the cluster

I am using a single node cluster for this example. Don’t be alarmed, since swarm mode allows us to do so. Also, no drastic steps are needed in this example to make it run on a multi-node cluster.

Let us get cracking on setting this up.

There is a service by the name of portainer (portainer.io) that you can use to manage the Swarm through a user interface.  Here is how you can get that going

You now go to your browser and do whatever we do next using a UI instead of the CLI. Portainer is listening on port 9000.

We now create two networks, as per our topology.

The ingress network is automatically created by Docker Swarm.

Now we need to create our services. Let's create them one by one. Note we have specified the network while creating these services (highlighted in commands). Also, I have published the images of TaskTrigger and TaskLauncher on my DockerHub public repo, hence these commands should work seamlessly for you.

You may notice that we did not specify the ingress network as part of the command. This is because of the very fact that we are publishing the port to the outside world that connects it to ingress network.

That is it, we are done. Our application is now running on a Docker cluster. We can scale up and down at will. We can add more nodes, and Docker orchestration would manage the containers automatically. You may want to use Portainer UI for such activities.

Before I conclude, I want to mention the seamless service discovery that happens in a swarm cluster. I can refer to the service name, for example, the Rabbit service that we created above. Docker would be able to identify the right container IP and route the traffic. Not only that, Docker is able to load balance across multiple container instances using just the service name.

Under the hood, Docker manages a virtual IP against the service. This virtual IP is used to route to multiple containers with different IPs using the Linux Kernel’s IPVS module. Docker automatically creates an Ingress Container connected to both the bridge network in node and the ingress network. A request on the Node IP is routed to the Docker bridge, which eventually routes it to the Ingress Container, and that is where further routing magic happens. If you are still curious, more is available in the Docker documentation.