Successful teams innovate often and deliver frequently. But because they move so fast, one of their challenges is ensuring that the rapid pace of releases doesn’t break their product. As more and more features are added, the risk of broken releases increases.

As a solution, DevOps teams often look to Spinnaker—an open source deployment tool that helps teams to deploy quickly and consistently. But there’s an even more powerful solution available. Armory—which is built on top of Spinnaker—gives teams all the benefits of Spinnaker, but adds mission-critical feature extensions and enterprise-grade stability.

In this article, we'll see how Armory's enhancement of Spinnaker ensures that modern applications can be deployed safely.

The first challenge to achieving a successful product rollout is understanding that unit, integration, and performance tests in isolated environments don’t always guarantee a successful release—and won’t completely prevent unforeseen issues in production. Issues can still occur due to reasons such as:

Over time, robust deployment patterns have evolved to provide a safe way to address these above challenges. These include deployment models like blue-green, rolling, and canary, as shown below: 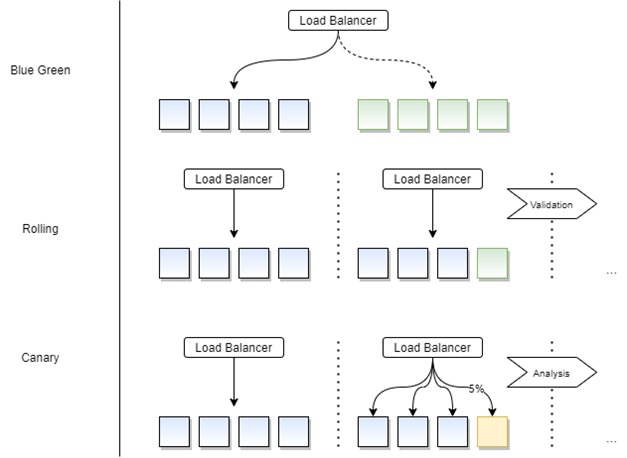 Deciding which of the above deployment models is the best for your team depends on the complexity of the application, the risk of degraded performance or outage, and your team’s capability to implement full analysis versus simple post-deployment tests.

In general, however, a sound deployment infrastructure and process should be:

Spinnaker is a popular open source, dedicated Continuous Deployment (CD) tool that can provide fast, safe, and repeatable application deployment of any size. It was created and open-sourced by Netflix and has since had contributions made by industry giants like Google.

As a specialized CD tool, Spinnaker simplifies the integration with your cloud infrastructure by letting you directly manage the clusters, server groups, load balancers, and applications. Spinnaker natively implements the industry-standard deployment patterns described above, including a full deployment flow with validation steps, manual approval, and parallel deployments.

Unlike Continuous Integration (CI) tools—which focus on the pre-deployment build phase—Spinnaker focuses on deployment capability. It expects the application to be already compiled, tested, and packaged in the build phase with CI tools such as Jenkins, CircleCI, Bamboo, and so on.

By specializing in only the deployment phase, Spinnaker provides better control of this process and ensures a better outcome for complex deployments. (For a more detailed comparison, check out this analysis of Spinnaker over Jenkins X for Enterprise).

As a deployment tool, Spinnaker integrates as a simple step in your CI/CD deployment pipeline and can be triggered based on Git events. The complexity of the build phase, which includes packaging and testing the application, is left to the CI tool. Meanwhile, the focus of Spinnaker is to provide a fully controlled deployment process, ensuring strict validation between each stage of the deployment and application release.

Finally, with native support for multi-cloud environments such as AWS, GCE, Azure, and also Kubernetes, Spinnaker offers simple configuration of the services and deployment steps as well as secret management for your application.

It’s clear that Spinnaker has a lot to offer, but there are certain use cases where Spinnaker alone—without enterprise-grade enhancements—may not be a good fit.

Open source projects can be powerful options, but they rely on community support and engagement. Compared to a commercial solution, there’s no guarantee of timely assistance when things go wrong.

If your organization’s infrastructure is mainly on-premise and not using Kubernetes or cloud-native tools, vanilla Spinnaker could be lacking the tools needed to manage deployments. In this case, you would need to build those tools yourself.

If your business is subject to strict compliance regulations, Spinnaker might lack the advanced security controls needed for your deployment pipeline configuration.

And finally, although Spinnaker has a strong Role-based Access Control (RBAC) feature, power users have a wide variety of permissions and can write pipeline configurations alone and run those without review and approval. They can even overwrite anyone else’s configuration without oversight. This lack of fine-grained permissions can be an issue for organizations where one team is responsible for managing security and the application team is responsible for deployment.

For companies in need of a solution to these limitations, that’s where Armory comes in.

Armory is a feature-packed, enterprise-grade, reliable deployment solution with Spinnaker at its core. Armory is suitable for organizations that have hit the limitations of Spinnaker or are looking for an easier way to maintain Spinnaker.

As Armory is built on top of Spinnaker, it already includes all of Spinnaker's main features, while addressing some critical limitations. 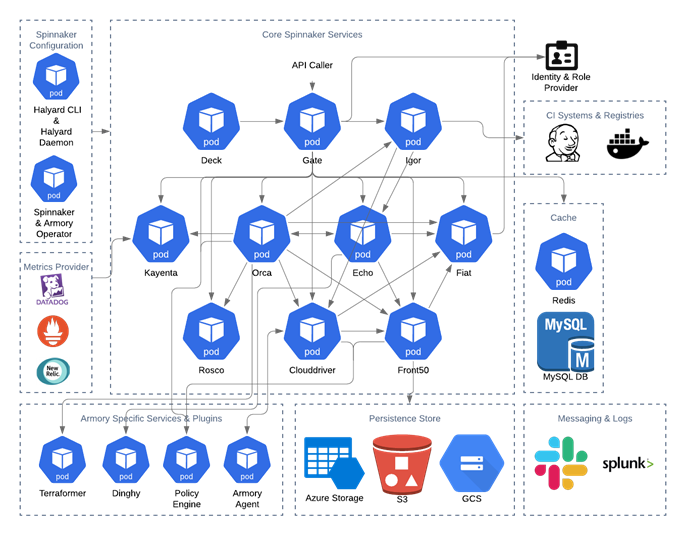 Armory architecture expands on Spinnaker by using external agents and a custom halyard configuration module. Its bundled-in set of microservices bring robust and resilient tools which enable users to manage deployments more easily than with Spinnaker alone. This allows it to make better use of the Kubernetes resources and to scale in several dimensions like the number of users, application pipelines, rate of deployments, or cluster target size. When it comes to Kubernetes cluster deployment and management, Armory Spinnaker can manage clusters spanning thousands of nodes.

The Armory Policy Engine extends the Spinnaker RBAC framework and allows enterprises to balance deployment velocity with control over the delivery process. Armory implements the policy using hooks during the pipeline configuration and execution. The Policy Engine helps to create a division of ownership between the app owners (owning the pipeline configuration and deployments) with the compliance owners (ensuring the security of the organization). This addresses the compliance limitation of vanilla Spinnaker by allowing Spinnaker users to maintain their deployment pipelines within the guardrails defined by the security team.

There’s a Terraform plugin available for Armory to manage additional cloud and on-prem infrastructure. The terraform plugin is simply another type of Task that Spinnaker can execute, and Armory uses a wide range of locations for the terraform manifests:

Finally, Armory provides certified releases and paid support (from Development to Enterprise level support) to ensure that the system is always stable and operational.

There are three ways you can start using Armory in your organization:

Spinnaker is a great choice for CD, and Armory extends Spinnaker's already-robust deployment features to make it even better. To try out Armory, you can install Armory Enterprise for Spinnaker in a Lightweight Kubernetes environment using an open source command-line tool called Minnaker. You can even install Armory to get up and running in 10 minutes. For the more adventurous, you can request a demo.