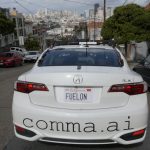 despite tremendous strides being made by uber, google and the like in driverless technology, arguably the most interesting angle on this is the advances being made in technology that turns existing vehicles into driverless ones.

i’ve written a few times about companies such as otto and oxbotica , both of whom are making strides in this direction. indeed, otto was recently bought by uber to support their own march into driverless technology.

arguably the most advanced of these startups, however, is comma.ai, which has received considerable publicity lately for their claims of offering an automation service for under $1,000, although there will also be a $24 monthly subscription to pay for software updates. they plan to begin rolling it out by the end of this year.

now, it should be said that the device won’t make your car completely automated, but it will give it a number of automated features for highway driving, including braking, changing lanes, and accelerating.

the device operates via a number of camera sensors that are added to the vehicle. it is reliant, however, on the radar systems that come in higher end models today, meaning it won’t be something that will turn your vintage vehicle into a driverless demon.

the company reports that, once fitted, it is capable of performing on par with systems like the tesla autopilot. it’s certainly an interesting development, and notable for the speed with which they have managed to come to market.

what is noticeable about all of these companies is how they are largely operating outside of major automobile manufacturers, and it remains to be seen how effective they will be without that level of engineering heft behind them. with the product set to hit the shelves in a matter of months, we won’t have to wait long to find out.