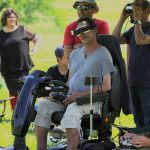 while drones are increasingly capable of doing incredible things by themselves, at the moment, they require a skilled operator to pilot them.

i've written previously about a number of attempts to open the market up somewhat. for instance, a british startup called accelerated dynamics has developed software that allows for more intelligent control of drones, often removing the need for an operator altogether.

"drone technology has limitless applications in numerous industries, but operating drones is expensive due to the requirement of a skilled human pilot. it seems strange that in an age of driverless cars and ar that drones are being manually operated when in fact they can be collaborating with other machines on the ground, underwater, in the air to achieve things that are beyond human capacity or extremely dangerous for a human to undertake," co-founder mantas gribulis said to me recently.

while targeting a very different market, handidrone is also attempting to make piloting a drone easier. the aim of the project is to allow drones to be accessible for people with various disabilities or mobility issues.

the project is a partnership between french charity ladapt and digital company kindai. ladapt exists to support people with disabilities, and they hope to both give disabled people the chance to fly a drone and possibly even open up new career opportunities for them as pilots.

each drone used in the project has some simple modifications to make it suitable for disabled users, and the team is hoping to encourage manufacturers to make these simple and low-cost modifications as a standard part of the build process.

it's certainly a nice project, and you can see the handidrone in action via the video below.