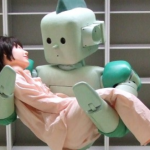 touch is an important part of human communication, but is traditionally something that many robots have either struggled with or avoided altogether. there have been some attempts to rectify matters however, with researchers from the john a. paulson school of engineering and applied science and the wyss institute for biologically inspired engineering doing some interesting work on tactile robots last year , with the aim of improving robotic surgeons.

a team from the university of twente are looking to further improve matters who have explored the importance of social touch to humans, and how it can be integrated into robotic communication.

the researchers explain in a recently published paper a study undertaken using sensors attached to the arm of a digitally connected mannequin to try and develop a system that can recognize when it’s touched.

robots, such as the paro, are increasingly taking on social roles, such as in care homes and other healthcare environments. here, they’re expected to provide not only matter of fact support to patients but companionship and emotional support.

despite promising early trials of such devices, they still lack the ability to translate contact in the way humans can. this could be especially valuable in working with children, with a number of robots used to soothe children awaiting treatment.

the research identified four key stages for the robot to go through to fully comprehend human touch. firstly, they must be able to perceive the very fact of human touch, before recognizing that they’re being touched, interpreting what that touch means, and then responding appropriately to it.

the study focused on the first two of these stages, and by using an array of 64 pressure sensors, they were able to successfully distinguish around 60% of the 8,000 touches they were exposed to.

whilst this seems a mediocre result, when we consider that no social context was given to the device, it’s a good initial effort. to try and provide a more reflective experience, the researchers are now undertaking the same kind of research but in a more realistic and social context.

they hypothesize that this context will allow the robots to better gauge the kind of contact they’re having, and will, therefore, bring social robotics that bit further on.