Fears are normally sourced from the media or some childhood movies we watched where pretty large robots take over planet earth. Quotes of “Will the robots take our jobs?” “There will be nothing left for us to do with the evolution of the computer”.

In reality a synergy between humans and technology can lead to better all-around solutions, rather than in isolation. This is something that is rarely considered in current engineering circles. With so many technology choices, why would we need stupid humans?

A Brief Story to Set the Tone

As far back as 2007, I hosted questions like this as part of the day job. Increased automation in manufacturing is a natural spore for questions of this nature. An example of this was a computer vision application that I built for a Masters dissertation whilst working for Alps Electric (one of the coolest companies in the world). I was inspecting graphics on buttons for correctness, both in finish and symbol.  Naturally, this was a task done by humans historically. We were using classification techniques to perform the task on the images, and the receiver operator characteristic curves (ROC Curves) showed that the classifier was right 93% of the time, which was a pretty good first pass result. Please note that this was a time that data science was called “doing your job”.

We wanted to achieve 100%, so in order to improve the algorithm, we decided to use the main source of intelligence in the room, the humans! By presenting the failures to the operator on the production line, and asking them a particularly simple binary yes/no “Is this a genuine failure?”, saving their response and the original image, we were able to get the classifier to close to 99% accuracy.

This proved something that I felt was always the case. Humans and machines can work in tandem as opposed to viewing it as a competition. With the rapid advancement of technology, along with the obsession with using technology to optimize our lives, I pose a question: Have we forgotten how these can compliment each-other? If any data science/machine learning application can get an accuracy level of 70% for example, we try to squeeze extra accuracy out of it through “fine tuning” the algorithm. Perhaps we could present the results in some way to a human for final classification?

Bring It All Together

Last April, I tried to draw out how I saw Data Science, IoT and Intelligence (both computing and humans) fit together, which is shown below. It is an evolutionary map of sort, where we have always had the verticals and data modalities (data type), and we began on our data journey by building some simple data processing/mining applications (either by us manually or by using algorithms). And lots of the current challenges in data science can be solved by this tier. However, we are seeing an increase in the requirement to bring in machine learning applications to solve more advanced challenges. This is a natural evolution towards artificial intelligence,or deep learning. If we look right down the map in a holistic sense, this is where the top class really comes to the fore. 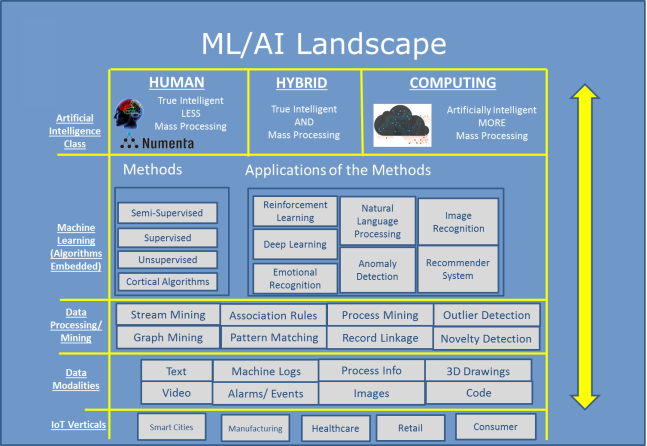 Now I am not saying that all applications in IoT and Data Science can be solved like this. Of course there will be exceptions. But there are some real tangible benefits to this approach. Consider the area of street crime. Imagine every camera in a city feeding video into a central location, and asking a human to monitor it. In reality, this is actually happening individually per building, park, mall, where security guards are monitoring areas in real time. With advancements in video analytics, it was feared that technology would replace humans. But it is not the case. What has happened as more devices/cameras hit our streets, it becomes impossible to monitor everything. By using advanced video analytics/machine learning capability to flag the anomalies to security, it means they can monitor a bigger space.

Thankfully, one of the high growth areas in technology is in Human Machine Interfaces (HMI’s), and there are some really good examples on how humans and computers can work together. Daqri‘s smart helmet is one such product, which is the worlds first wearable HMI. Their mandate is to use technology to improve and optimize how we work. by integrating compute, sensors and computer vision technology into a well designed helmet. Work, in the Future. 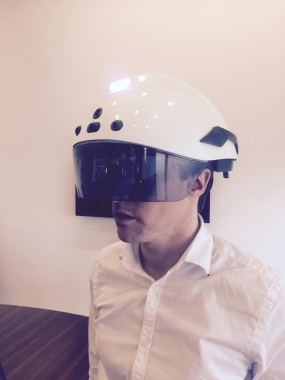 As we enter the next phase of digital transformation, ask yourself: How can humans improve/compliment the work of technology in your application?

Start NLP with a Single Neuron